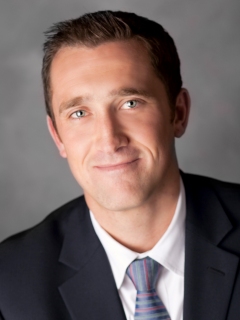 Headwinds persist for Albuquerque, which continues to experience anemic growth and face challenges brought on by the recent recession. According to the Mountain Monitor, Albuquerque ranks 91st out of 100 metro areas in overall recovery from the downturn. The following graphic illustrates Albuquerque’s ranking relative to other metropolitan areas in the U.S. 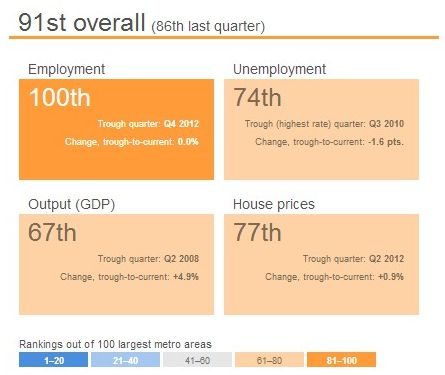 Heavy dependence on government spending, high unemployment, a limited number of construction starts, low economic output, and decreased passenger traffic through Albuquerque International Sunport all characterize the economic woes in Albuquerque. Nevertheless, the city has some bright spots, including a highly educated workforce, a well-established medical sector, a budding film industry, and the University of Mexico, which continue to be the driving forces behind hotel demand in Albuquerque. 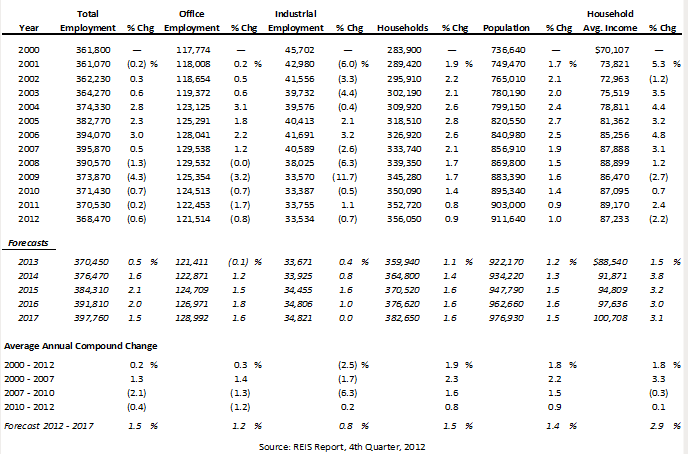 Albuquerque’s total employment has experienced declines since 2008; however, the region’s unique blend of cultural and outdoor opportunities coupled with beautiful weather and a relatively low cost of living have made the city popular for relocations. Although the market is anticipated to remain weak through 2013, institutions such as the University of New Mexico and an increasingly active film industry render Albuquerque fairly resilient, especially as the national economic climate continues to improve. In addition, new mixed-used projects now under development should continue to make Albuquerque attractive for households and corporate relocations.

The following table illustrates unemployment statistics for Albuquerque, the MSA, the state of New Mexico, and the U.S. from 2002 to 2011. 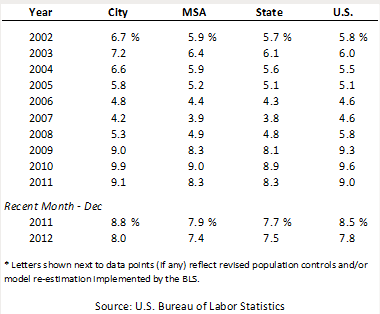 Albuquerque posted 13 consecutive months of negative job growth ending December 31, 2012, and unemployment has continued to increase in 2013. Continued stagnation in the area’s economy and the federal government does not allow for much near-term optimism in the employment picture for Albuquerque. Several of the market’s largest employers, including Kirkland Air Force Base, will likely reduce civilian employment in the next few years. A number of government contractors with a presence in Albuquerque, including Fiore Industries, will need to reduce local employment levels as well in order to stay viable. A recent study by the University of New Mexico estimated that 20,000 jobs could be lost due to the so-called “sequestration” enacted by Congress in early 2013. Nevertheless, in fiscal year 2012, Sandia National Laboratories paid an estimated $402 million to small businesses in New Mexico and expects to continue to experience budget and staffing increases. In addition, the possibility of the state approving an increase in film tax rebates should provide an incentive for more film production and overall spending at Albuquerque Studios and filming locations in the area.

Albuquerque’s office market continues to face the same challenges as the city as it tries to recover from the effects of the recession. Vacancy rates remain elevated, stemming from the city’s consistently high unemployment levels; vacancy rates remained higher than the national average of 15.4% for the fourth quarter of 2012. The absorption of 65,000 square feet for Lowe’s Home Improvement’s customer-service call center in the first half of 2012 has provided the market with some positive stimulus.

The following table illustrates a trend of office space statistics for the overall Albuquerque market. 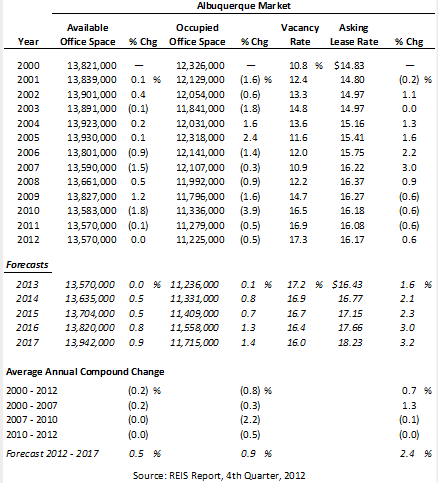 Demand for office space is heavily dependent on the health of overall employment in Albuquerque. As such, until the labor market exhibits signs of strengthening, office vacancy rates will remain elevated.

Hotel Construction Update
According to HVS research, one new hotel, the Hampton Inn & Suites, is currently in the pipeline for the Albuquerque lodging market. Hence, the percentage increase to the overall market supply will be minimal in the near term.

Outlook on Market Occupancy and Average Rate
With the city still struggling from the recession and the uncertainty of the effects of the sequester, occupancy for Albuquerque’s hotels is anticipated to remain weak over the next several quarters. Passenger traffic counts at Albuquerque International Sunport continue to decline as commercial and group demand remains soft. A $20-million renovation of the Albuquerque Convention Center may help attract much-needed group business to Albuquerque; however, the city will continue to battle uphill with similarly sized cities for convention business. Leisure travel should remain strong, as Albuquerque has recently been awarded several accolades that have helped its marketing efforts to potential tourists. In addition, numerous special events, including the Balloon Fiesta and the Gathering of Nations Pow Wow, should continue to attract hotel demand. Meanwhile, average rate in the city is likely to remain muted, as hoteliers are unable to push rate in the absence of strong levels of demand.

Conclusion
Albuquerque’s hotel market will likely remain on a struggling course through the near term. Unemployment levels are expected to remain high, as the sequestration will affect many aspects of the economy. However, Albuquerque does benefit from several institutions that work with a multitude of clients, including the multibillion-dollar Sandia National Laboratories and the well-established University of New Mexico. In addition, the healthcare sector and a fledgling film industry should continue to enhance demand levels in Albuquerque once market fundamentals rebound, providing for a more encouraging outlook for the local hotel industry in the coming years.

Michael is a Vice President with our satellite Consulting and Valuation division in Austin, Texas. Michael earned his bachelor's degree from the University of Nevada Las Vegas and has extensive front-line hotel experience in large casino hotel and resort operations. Both his hotel operations and real estate experience allow Michael to provide a level of insight and expertise critical to the hotel appraisal or consulting assignment. As an Vice President, Michael oversees and executes site inspections, analysis, and report preparation for our valued clients. Contact Michael at +1 (978) 808-7852 or [email protected]