Public sector involvement in convention center hotels is common due to high cost of development and lack of private capital for such investments. Many communities provide public subsidies to projects that are not feasible on a purely private basis.

Public sector involvement in convention center hotel projects is common due to the high cost of development and lack of private capital for such investments. Event planners expect the presence of a hotel adjacent to a convention center. Consequently, proximate hotels are essential for many convention centers to remain competitive in the convention center industry. As most communities desire the economic impact of group events and the spending of the visitors they attract, many are providing public subsidies to projects that are not feasible on a purely private basis.
Public involvement in hotel development may be divided into two general categories: 1) public/private partnerships, and 2) public financings. In a public/private partnership, the hotel is typically owned and developed by the private partner, and public involvement takes the form of a public subsidy or “bridging the gap” between the cost of constructing and financing a hotel project and the combination of equity and loans a private developer can secure for the project. In the category of public financing, the sponsoring municipality issues taxable or tax-exempt debt to cover the cost of constructing and financing the hotel project, accessing the municipal bond market rather than conventional sources of hotel debt and equity. The net operating revenues of the hotel are pledged as the first source of funds for the repayment of the bonds. A comparison of the two approaches to hotel financing is presented in the table below. 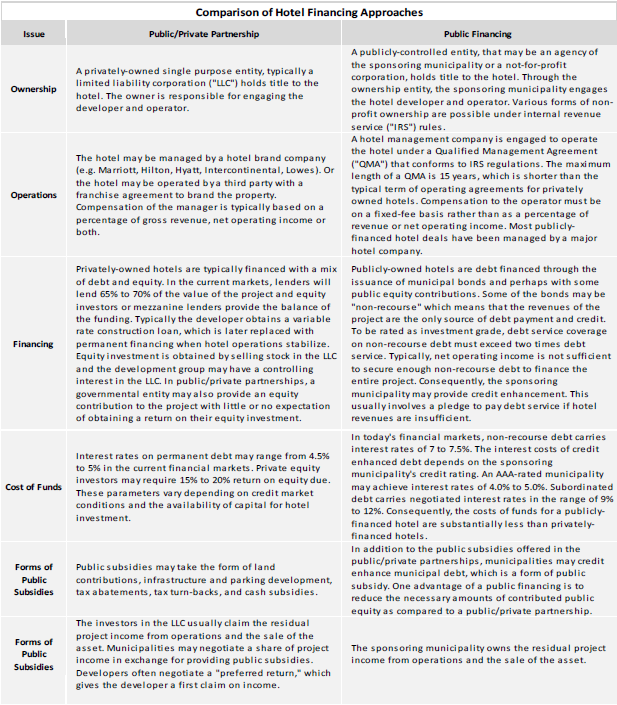 Trends
The figure below shows the frequency of publicly supported convention center hotels by year of opening date from 1959 to present to 2020. Three projects are currently under construction. HVS research found 44 hotel projects with 600 or more rooms that had substantial public-sector involvement in their financing. 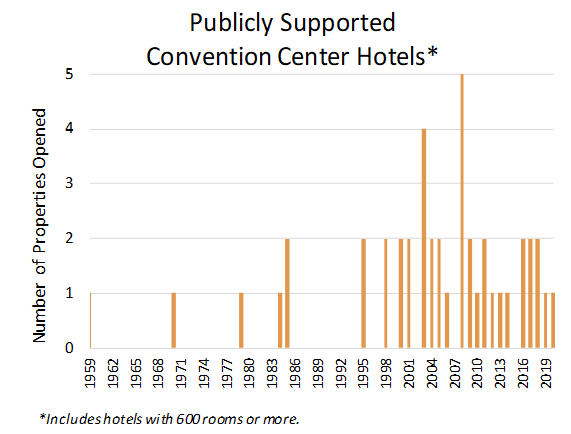 The maturation of a highly competitive convention market has placed increasing pressure on cities to improve their appeal by adding hotel supply proximate to their convention venues. A change in tax law in 1996, which expanded the ability of governments to publicly finance hotels with municipal debt, also caused public sector investment in hotels to become more frequent.

Since 1959, the only hotel projects of 600 rooms or more outside of the gaming and resort industries that have been privately financed have occurred in New York City, Austin, and Seattle, where high  occupancy and room rates can support development of a full-service hotel. All other developments have required some form of public support, either through public financing and ownership or a through a public/private partnership.

Share of Public Investment
The table below lists convention center hotel projects with more than 600 rooms that have received public sector support. This analysis covers the opening dates of hotels for the years 1959 through 2020. 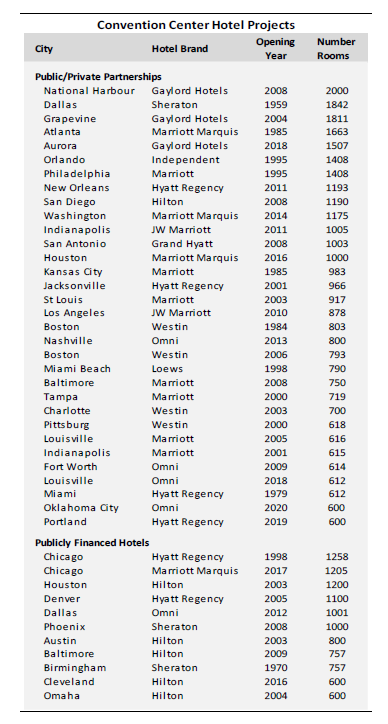 Forty-two cities have participated in 44 convention center hotel projects with 600 or more hotel rooms. Twelve projects have been publicly financed. Where information was available, HVS estimated the share of public investment in public/private partnerships of these hotel projects. The estimated share of public investment has averaged 33% and ranged from approximately 10% to 65%.

Public/Private Partnerships
The amount of public support required to finance a hotel through a public/private partnership is dependent upon the gap between the capital cost of the project and the amount of debt and equity that can be raised in the capital markets. 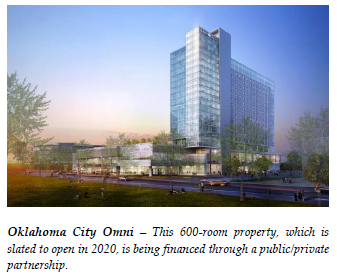 Public/private partnerships in hotel development are more frequently used for projects in which a reasonable amount of public equity investment can make the difference between a feasible and infeasible project.

The financial feasibility of a hotel depends on several factors, including:
For the recently approved project in Oklahoma City, city leaders chose to engage a private developer to construct a $235.5-million, 600-room Omni Hotel adjacent to the new convention center. The city will contribute $85.4 million capital (36% of the total) by issuing debt to be repaid with revenues from a tax increment financing district and other sources.

Publicly Financed Hotels
The first publicly financed hotel project completed under current IRS rules was the Hyatt at McCormick Place in Chicago. The Chicago project and the Sheraton in Sacramento were the first and only projects to be financed with all non-recourse debt where the only source of debt repayment payment and credit for the bonds was the net operating income of the projects.

Less favorable credit markets, decreasing access to capital, and uneven performance of hotel markets since 2001, forced all subsequent projects to be credit enhanced. That is, the sponsoring municipality or another third-party entity guarantees that at least a portion of the debt service will be paid if hotel net operating income is not sufficient. After the 2008 Great Recession and the disappearance of mono-line insurers, third-party guarantees became unavailable. Local governments assumed increasing amounts of risk in publicly financed projects or turned to public/private partnerships that shifted risks to the private sector. 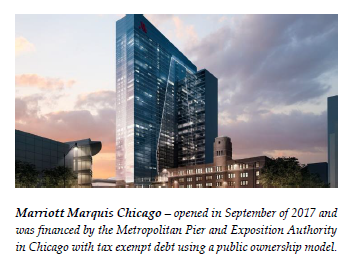 In public financings, the public sector raises 100% of the capital through debt issuance. The primary advantages of public financings are lower costs of capital and the benefits of retaining ownership and control over of the hotel asset. In public/private partnerships, credit enhancement offered by local governments can provide the security required to borrow in the capital markets.

In most cases, the public sector also benefits from room block commitment agreements, which require the convention hotel manager to commit a large share of their room inventory to convention center events at reasonable rates.

But, these financial advantages require the assumption of more risk—primarily the risk of an underperforming project that does not generate sufficient revenues to repay debt and provide for capital replacement costs.

Most municipalities seek to balance their level of financial risk with the market demands for a level of public financial commitment that makes the project feasible. Risk mitigation strategies include the following: Facing debt capacity limitations and seeking to maintain control of the project in any unforeseen foreclosure situation, some municipalities have chosen to credit enhance the entire debt issuance. In Houston, the city issued revenue bonds supported by city-wide lodging taxes to support the development of their headquarters hotel and convention center expansion.

Even though many of these projects opened prior to or during the 2008 Great Recession, only one project, the St. Louis Renaissance project (subsequently renamed the Marriott St. Louis Grand) defaulted on its debt. Other projects such as the Sheraton Hotel in Phoenix faced dual challenges of the recession and event planner boycotts brought on by passage of unpopular State legislation. None-the-less, guarantees of debt repayment by the city allowed the Phoenix Sheraton and other projects facing challenging economic conditions to continue to successfully operate and avoid default.

Conclusion
Public agencies may choose from a wide variety of options to provide public support for a convention center hotel project. This support can come in the form of bond financing, the donation or favorable leasing of land or infrastructure, empowerment zone development, and other methods of support discussed herein. Whatever forms the public support may take, public officials often try to provide a level of support that is commensurate with the expected economic impacts the proposed project is expected to generate in the local community.

Correction: A previous version of this article listed the Fairmont Hotel in Austin as a publicly financed hotel. The Fairmont was privately financed. 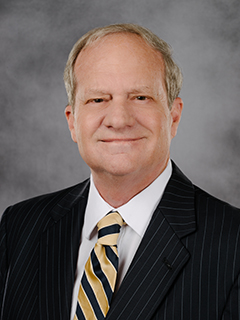 Brian Harris is a Senior Director at HVS. He brings extensive experience in public facility financing. He served as Vice President of Analytical Services, ScheerGame Sports Development, LLC and previously in a similar capacity at William R. Hough & Co. Harris was deputy manager of public finance at Raymond James. During his 25-year career as an analyst and as a manager of analytical services, he has worked on over 1,000 municipal financing projects ranging from basic general obligation bond issues to complex derivative transaction. Email: [email protected]

Public sector involvement in convention center hotels is common due to high cost of development and lack of private capital for such investments. Many communities provide public subsidies to projects that are not feasible on a purely private basis. %%ViewCount%% Views Comments
Share:
Subscribe To Newsletter