Raleigh’s economy and hotel landscape continued to grow in 2016, despite controversial government measures that affected the entire state. Hotel supply expands to meet demand, and 2017 is expected to be generally positive for the lodging industry.

The City of Raleigh, also known as the City of Oaks, is the capital of North Carolina, the seat of Wake County, and one of the most economically diverse cities in the state. The capital city has long been known for its high standard of living and skilled industries, which has made it one of the fastest growing cities in the southeastern United States. According to recent data reported by the U.S. Census Bureau, the state of North Carolina, as a whole, was the sixth-fastest-growing state in the U.S. from 2015 to 2016. Raleigh was also named in the top twelve destinations to travel to in 2017 by Forbes Travel Guide[1], sharing the ranks with destinations such as Oahu, Lisbon, Santa Barbara, and Bali. This growth has helped to bolster an already strong hotel and tourism industry in Raleigh.

The economic base is diverse in Raleigh, with strong employers in the government sector and the healthcare, finance, and technology fields. Major employers in the Raleigh area include IBM, Citrix, WakeMed Health & Hospitals, North Carolina State University, Cisco Systems, SAS Institute, and Duke Energy, among many others. Companies headquartered in Raleigh include BB&T Insurance Services, Carquest, First Citizens Bank, Golden Corral, and Red Hat. The city is best known for the Research Triangle Park (RTP), the largest research park in the country. Located between Raleigh and neighboring Durham, RTP is home to over 200 companies (including IBM, Cisco Systems, and GlaxoSmithKline) and employs over 50,000 workers. The local economy is also strongly influenced by the presence of world-class educational facilities, such as North Carolina State University (NCSU), the University of North Carolina at Chapel Hill, and Duke University. The universities provide a steady supply of highly skilled, young professionals that help to make Raleigh an ideal location for employers.

Downtown is realizing some of the strongest growth in the market. The GoRaleigh Transit Station was recently renovated and expanded in 2017, and Union Station, the city’s multi-modal transit center, is set to be fully operational in 2018. Numerous mixed-use developments are under construction or are starting construction soon, including the 2.5-acre The Dillon, One and Two Glenwood, 400H, and the two-tower City Centre. When Raleigh’s Yadkin Bank was acquired by First National Bank, FNB announced it would build a new 22-story tower in Downtown Raleigh for its regional headquarters. Moore Square park on the east side of Downtown will be closed and completely renovated in 2018, to become one of the area’s premier public spaces. Finally, Downtown Raleigh continues to realize significant residential growth, including luxury apartments at SkyHouse, rowhomes at Hargett Place, and townhomes at The Ware, among many others. Rebuilding will begin soon on the Metropolitan Apartments, which were under construction in early 2017 when they were destroyed by a five-alarm fire.

A major storyline in Raleigh and the state of North Carolina in 2016 was the March passage of the controversial Public Facilities Privacy and Security Act, also commonly known as House Bill 2 (HB2) or the Bathroom Bill. The legislation was immediately met with public outcry as advocates for the bill’s repeal challenged the element of the law that eliminates anti-discrimination protections for members of the LGBT community. While other cities across the state were also affected by the passage of the bill, as the state capital, Raleigh was at the heart of controversy and felt the effects of the public uproar on multiple fronts. Economists estimate that the state lost between $450 million and $630 million because of the passage of the legislation, from business relocation and expansion interruptions, loss of large meeting and group events, curtailed visitation and lodging revenues, and the relocation or cancelation of numerous concerts and sporting events. In March 2017, officials enacted House Bill 142 (HB142), compromise legislation that repealed and replaced HB2. With this repeal, Raleigh and the state can begin to repair the damage to their reputation and economy.

The Raleigh hotel market is divided into several different submarkets that have individual demand generators and guest profiles. The main hotel submarkets include: 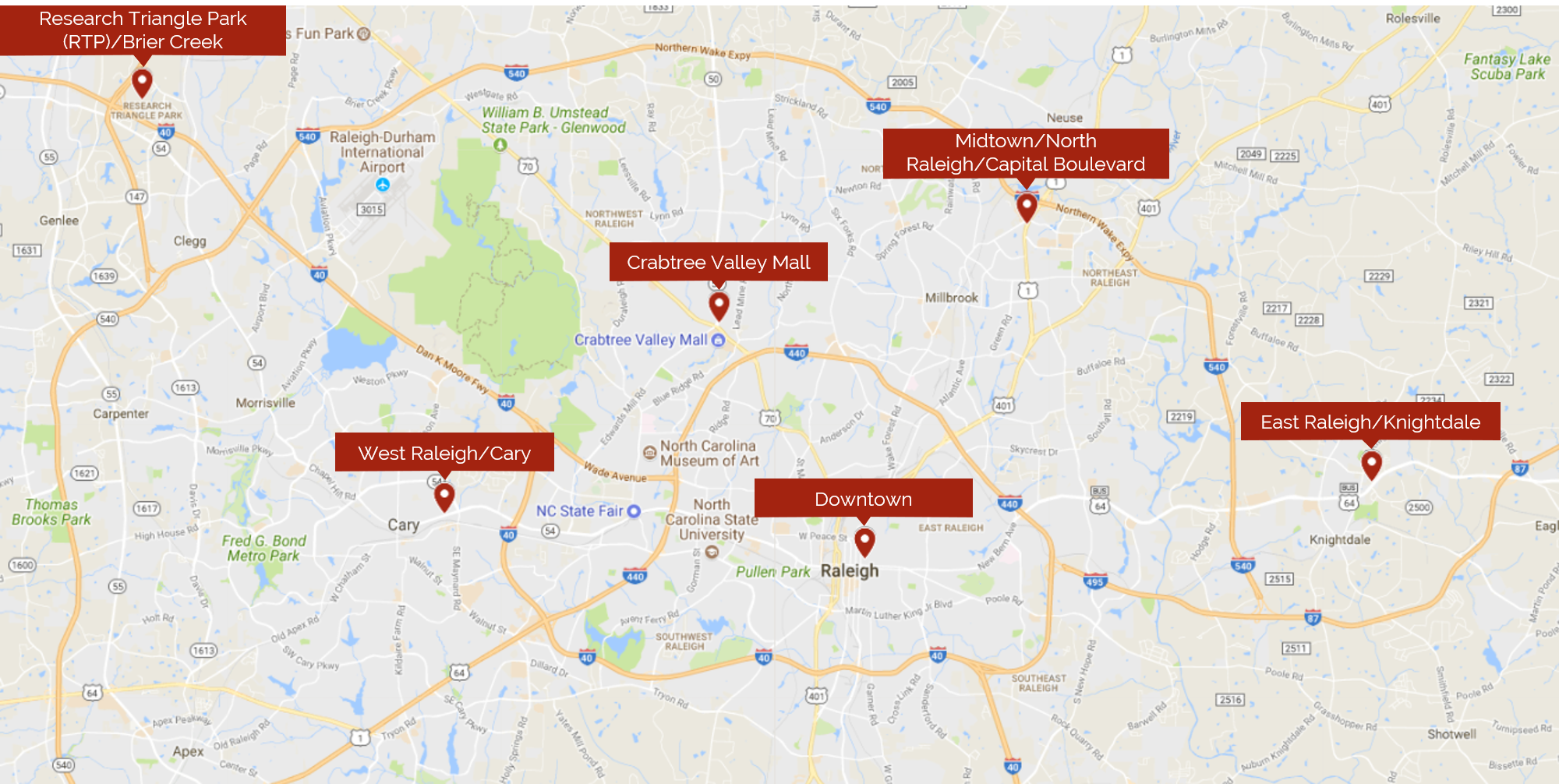 Hotel demand in each individual submarket is largely driven based on the proximate location to a variety of economic and leisure demand generators. However, given the city’s relatively compact size and ease of access through the area, competition between submarkets does overlap quite a bit.

In 2015 and 2016, five properties opened in the Raleigh hotel market, including two properties in Brier Creek, one in the Crabtree Valley area, and Aloft hotels near Downtown Raleigh in the University area and in Brier Creek. According to local market participants, the new supply was quickly absorbed by the market. In the year-to-date period through October 2017, three long-anticipated hotels opened: the AC Hotel by Marriott North Hills in March, the Residence Inn by Marriott Downtown in July, and The Stateview – Autograph Collection on the Centennial Campus of North Carolina State University in October. In addition, the Fairfield Inn & Suites by Marriott Raleigh North opened in October at the intersection of Capital Boulevard and Interstate 540, across from the Triangle Town Center. Initial data reflect that the AC Hotel and the Residence Inn by Marriott are also being quickly absorbed by the market. In addition, three hotels in Crabtree Valley underwent comprehensive renovations to public and guest spaces in 2016, including the Marriott, Embassy Suites by Hilton, and Holiday Inn. While occupancy levels at these hotels were negatively affected during the process, they are ramping back up quickly, and management should be able to drive strong average daily rate (ADR) growth given their significantly improved products.

According to the Greater Raleigh Convention and Visitors Bureau, numerous new hotels are currently planned for Wake County over the next several years, with several properties currently in some stage of construction as of November 2017. In Brier Creek, a Hyatt House is set to open in January 2018, while a Holiday Inn Express is under construction, although an opening date has yet to be confirmed. In Cary, a Homewood Suites by Hilton is scheduled to open in May 2018, and construction recently began on a Courtyard by Marriott. Just east of Raleigh, a Hampton Inn & Suites by Hilton is slated to open in December 2017 in Knightdale. Meanwhile, two new Hilton products, a Home2 Suites by Hilton and a Tru by Hilton, are proposed for the airport submarket; however, opening dates are unknown for both projects.

Additionally, Marriott has announced several new projects in Raleigh, including a Westin in the Crabtree Valley area, and two Element properties, scheduled for the RTP/Brier Creek area and Downtown Raleigh. The Downtown market has several other properties planned or rumored for future development. Construction of a dual-branded Hilton Garden Inn/Homewood Suites property is scheduled to start in the first quarter of 2018, with approximately 15 months planned for construction. A regional developer purchased a site immediately north of the Raleigh Convention Center and plans to build a Courtyard by Marriott, which will likely open in 2020. Finally, two of Downtown’s new mixed-use developments, Two Glenwood and City Centre, are anticipated to include a hotel component, although details of these projects are still being finalized. The construction of hotels in Downtown Raleigh is expected to help boost future meeting and group demand with increased bookings at the Raleigh Convention Center; the Greater Raleigh Convention and Visitors Bureau should be able to bid on an increasing number of larger events, which it has previously had to turn away given the limited hotel supply within walking or shuttle distance of the center.

Wake County’s lodging market continues its strong performance and remains one of the top markets in the state. Countywide occupancy has grown each year since 2009. In 2016, Wake County realized an occupancy level over 70% for the first time since 1997, which is five percentage points higher than the statewide average. Occupancy in the City of Raleigh reached just beyond the county average, at 69%. ADR continued to improve each year, as well, remaining slightly above the average for the state in 2016; countywide ADR increased approximately $4.00 from 2015. Downtown Raleigh is one of the strongest submarkets, with ADR and RevPAR levels approximately $20 higher than the average for the City of Raleigh.

We expect Raleigh to continue to realize robust RevPAR growth through the future because of its strong economic base, continued increasing popularity as a destination, and status as the state capital. Given the recent and ongoing increase in lodging supply, average occupancies should decline slightly in the near term, but demand should continue to grow, and the new supply should be absorbed relatively quickly. Hoteliers believe the greatest opportunity for RevPAR gains is through ADR growth given the introduction of high-rated supply and significant improvements at numerous hotels in the market.

Raleigh’s economy and lodging industry continues to realize strong growth, as the area remains a premier destination for business and tourism. Hotel development should continue through the near future, and the new supply should be absorbed relatively quickly given the improving demand levels. Further revenue growth is anticipated through higher average rates due to the significant renovations of several properties in the market and the positioning of the new supply that is entering the market.
[1] http://www.forbes.com/sites/forbestravelguide/2017/01/23/forbes-travel-guides-12-top-destinations-of-2017/

Raleigh’s economy and hotel landscape continued to grow in 2016, despite controversial government measures that affected the entire state. Hotel supply expands to meet demand, and 2017 is expected to be generally positive for the lodging industry. %%ViewCount%% Views Comments
Share:
Subscribe To Newsletter