The detrimental Category-10 Typhoon Hato struck Macau in August and left extensive damage to the city. How did it affect Macau’s visitor arrivals, hotel, and casino sectors amidst the city’s tourism industry recovery in 2017?

The past two years have been a difficult period for Macau since the Chinese President Xi Jingping announced a campaign to crackdown corruption and government official’s lavish spending, triggering significant slumps in visitor arrivals and revenue growth in the tourism and gaming sectors in Macau. After two years as of 2017, Macau’s resilience has been demonstrated through the growing visitor arrivals, hotel performance, and casino revenue, even after the detrimental Typhoon Hato.

On 23 August 2017, the Category-10 Typhoon Hato struck Macau to become the worst natural disaster the city had encountered in more than half a century. Four days later, another Category-8 typhoon battered the city, leaving extensive damage to the Special Administrative Region. The typhoons took the lives of ten people and deprived 50 per cent of the population of power and water supply for a week. The Four Seasons Hotel had to close its casino and restaurant operations while the Wynn Hotel was left without water and power. The Macau Government Tourism Office (MGTO) requested its tour agent partners to suspend group tours to Macau for a week to allow the city to recover from the aftermath of Typhoon Hato.

The negative impact from these two typhoons in Macau is evidenced by a 0.6% decline in visitor arrivals in August 2017 compared to the same period in 2016. Additionally, visitor arrivals from July to August posted a 1.8% decline in 2017, in contrast to a 3.1% and 14.5% increase during the same periods in 2016 and 2015, respectively. Despite this misfortune, Macau was still able to capture a 2.4% year-on-year growth in visitor arrivals in the following month of September, at 2.5 million. With the additional  increase in hotel room supply, total quarterly visitor arrivals to Macau in the third quarter of 2017 posted a 2.1% year-on-year increase to 8.3 million, compared to 8.1 million in the same quarter of 2016. This emphasises the resilience of the Macau market and quick recovery, surpassing 2016’s performance. Collectively, year-to-date through September 2017 registered an additional one million visitors to total 23.8 million, a strong 4.2% year-on-year growth.

During the third quarter of 2017, the top five key source markets remained the same (in order of size): mainland China, Hong Kong, Taiwan, South Korea, and Japan. Supported by China’s buoyant economy, mainland China continued to be the largest source market constituting 69.6% of the market or nearly 5.8 million travellers to Macau. This figure reflects solid growth of 6.6% compared to the same period in 2016. The growth in the number of visitors from South Korea was also outstanding, at 27.8% in the third quarter of 2017 compared to the same period in 2016. The 211,000 visitors may be attributed to Macau’s adaption of the automated immigration clearance services for Koreans in 2016 and the city’s successful promotion initiatives in South Korea, where gambling for locals is restricted to one single, remote casino. As the Japanese government is encouraging its citizens to go abroad, Japan registered a 7.7% year-on-year growth to 82,000 visitors in Macau. The increase is indirectly aided by the rising popularity of the city’s an-hour-away neighbour, Hong Kong, among Japanese as well. A 14.4% year-on-year increase in Japanese visitor arrivals to Hong Kong was recorded during the third quarter of 2017. This growth is partially attributed to expanding flight capacity between Japan and Hong Kong, including new flights added by both the legacy carriers and low-cost carriers, such as Hong Kong Express, Jet Star and Vanilla Air from Tokyo and Peach from Osaka.

On the contrary, Hong Kong and Taiwan both faced a decline of visitors to Macau. In particular, Hong Kong arrivals plunged significantly by 11.3% to 1.5 million compared to 1.7 million in the third quarter of 2016. The negative impact from the typhoons was one contributor to the decrease in Hong Kong visitor arrivals together with an aggressive hotel promotion campaign in place the year earlier. To a lesser extent, Taiwan also saw a 2.6% decrease to 282,000 visitations in Macau. 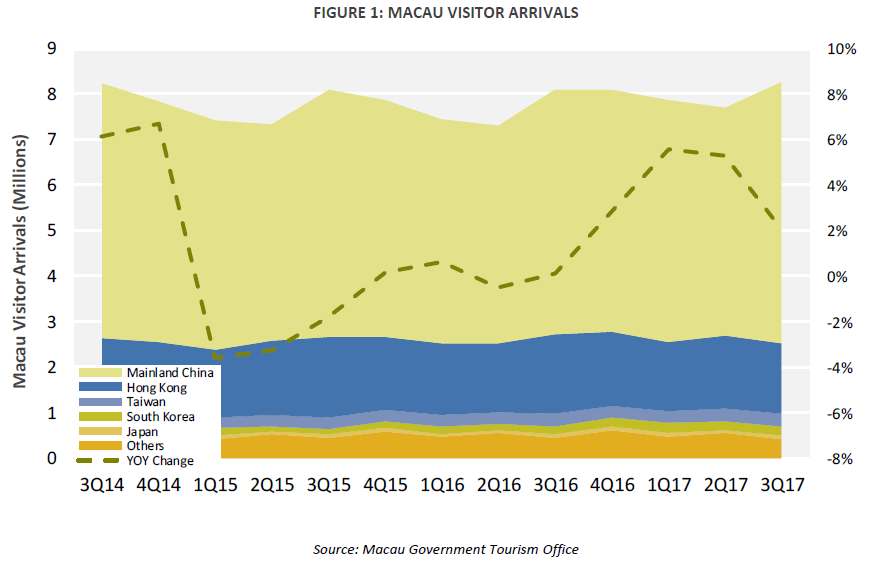 Relative to the 11.3% decline in total visitor arrivals, Hong Kong overnight visitors indicated an even stronger dip by 17.6% to 754,000 travellers in quarter three 2017, a total loss of 161,000 travellers from the same period in 2016. Taiwan also registered a negative 1.3% year-on-year change in visitors staying overnight to 145,000 travellers only. 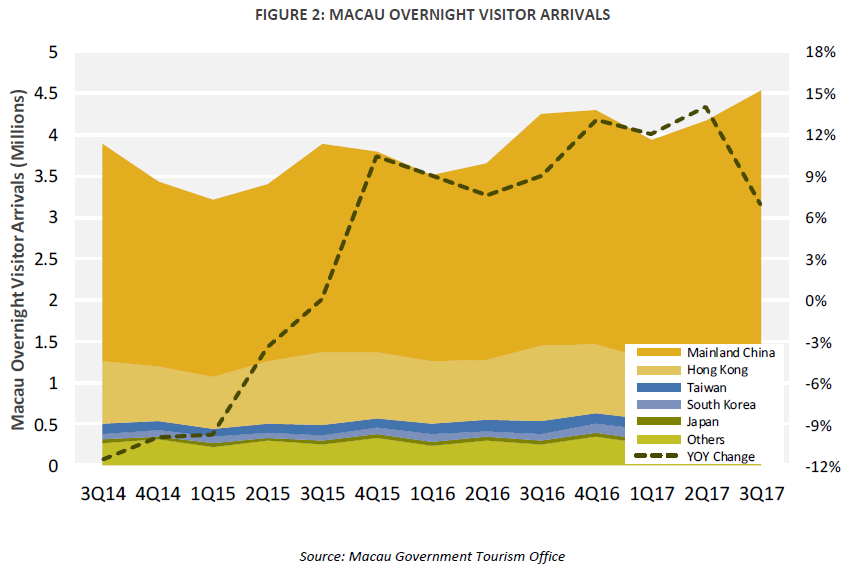 The third quarter’s 2.1% year-on-year visitor arrivals growth rate, despite the storms, further reflects the city’s resilience in attracting visitors to the gaming hub. Moving forward, Macau will continue to thrive given the Pearl River Delta Economic Zone development and the improving infrastructure. The long-awaited Hong Kong – Macau – Zhuhai bridge is expected to open at the end of 2017, which will shorten the current travel time from four hours to thirty minutes, enticing more visitations from cities nearby. The Macau Government Tourism Office (MGTO) also plans to attract 40 million visitors by 2025. This is  achieved by diversifying the mix in focusing on non-gaming tourism, family holidays, conventions and exhibitions, as well as rebranding Macau as a multi-day destination, which also indicated the city’s confidence and hopes in its tourism sector.

Amid the recovery in the tourism industry, Macau’s hotel market received great benefits from the remarkable 10.8% year-on-year growth in overnight visitors during January to September 2017, compared to the same period in 2016. As of September, occupancy in Macau recorded a 4.8 percentage point increase to 88.3%. This growth in occupancy was partially driven by the average rate repositioning, in which it registered a year-on-year 1.7% decline from MOP1,279 to MOP1,257, yet closing at a 3.9% jump on revenue per available room (RevPAR) to MOP1,111.

In quarter three alone, the city’s hotel sector recorded a 3.8% growth in RevPar to MOP1,153. The equilibrium between occupancy and ADR can be found among hotels in the city, given that both registered an increase in the third quarter of the year. Occupancy recorded a 1.4 percentage point year-on-year increase to 90.7% while ADR achieved a 2.1% growth to MOP1,272.

The city’s ability to quickly recover was illustrated after the typhoon month. Due to the typhoons, some hotels in the city offered promotions in September to capture overnight guests. In September, the average rate received a 4.4% decrease compared to August from MOP1,327 to MOP1,268. However, the decreased average rate from August still posted a slight 0.1% increase from September in the previous year. The impact of this promotion seemed successful as the occupancy for September reached 90.0%, a two percentage point increase from August in 2017 and a four percentage point increase from September in 2016. The RevPAR for September recorded a 4.6% year-on-year increase to MOP1,141.

Despite the fact that VIPs are still the casino industry’s bread and butter, income from the mass market is increasing as well. As China restricts VIP junket operators to bring wealthy mainlanders to Macau, the only place in China where casino gambling is legal, casinos are aiming to become less dependent on VIPs. To protect the longevity of the gaming industry, new resorts such as the Parisian, Wynn Palace, and Studio City have been created to lure the mass market to Macau, which requires a far larger number in visitor arrivals. The city is seeing a return, as it attracted a 4.2% increase in visitor arrivals during the first nine months of 2017.

Despite the damage the typhoons caused in the city, its casino sector remained to show a year-on-year revenue jump of 21.8% to MOP67.2 billion in the third quarter. A healthy sign of casinos recovery is shown with the positive growth of the largest two revenue-driving games, VIP Baccarat and Standard Baccarat. In the third quarter of 2017, VIP Baccarat had a significant 35.0% year-on-year increase to MOP38.7 billion; while Standard Baccarat witnessed a 7.3% increase to MOP20.8 billion. This is mainly driven by the return of the mainland Chinese market, displacing lower gambling-spending markets.

In the first three quarters of 2017, VIP Baccarat and Standard Baccarat play make up 88.4% of the total games of fortune revenue, with the VIP portion alone making up 56.9% of the total revenue, compared to 52.6% in the same period in 2016. As the number of mainland Chinese visitors is restoring steadily, the same force of high-roller takes that disappeared in 2014 and 2015 is gradually returning to the gaming tables in Macau this year. 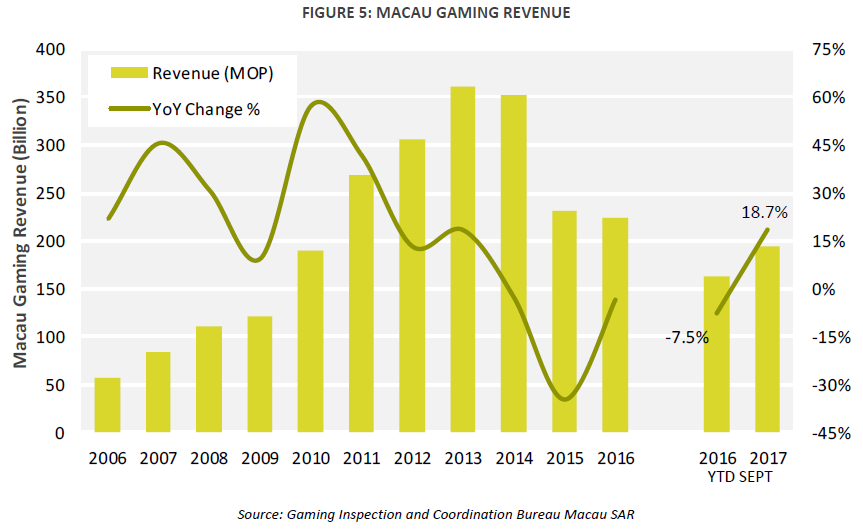 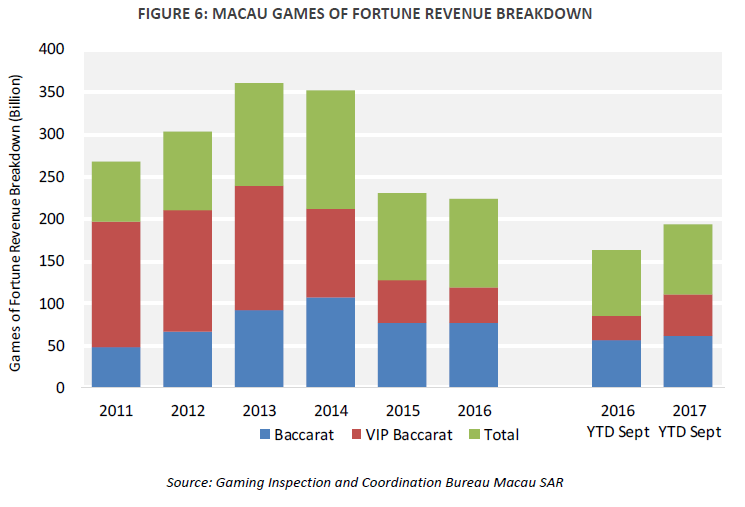 The detrimental Category-10 Typhoon Hato struck Macau in August and left extensive damage to the city. How did it affect Macau’s visitor arrivals, hotel, and casino sectors amidst the city’s tourism industry recovery in 2017? %%ViewCount%% Views Comments
Share:
Subscribe To Newsletter