The rapid development of China’s hotel industry has seen an unprecedented amount of supply come online since the turn of the millennia. Owning hotels requires a distinct skill set to maximize asset performance over time.

A period of irrational hotel development drive by ulterior motives has seen properties being built that are not economical in operations, use of real estate and ultimately investment. The industry must depart from its obsession with full-service hotels and embrace more realistic investment criteria, should hotels ever become a trading asset class with reasonable liquidity, attracting investors from around the globe.

Controlling labor cost is paramount and too many properties cannot drive sufficient business to justify their expenses. Most hotels are too large, both in number of units and gross floor area and feature excessive food and beverage and meeting facilities. The combination of the above factors creates poor investment returns that cannot be, and were rarely, justified on a standalone basis. As a result, the market for hotel transactions lacks liquidity; an insurmountable pricing gap separates sellers, who are looking to justify their excessive development cost, and buyers, who see little value due to poor performance from oversupply.

The rapid development of China’s hotel industry has seen an unprecedented amount of supply come online since the turn of the millennia. Building hotels is unlike owning hotels and a distinct skill set is required to maximize the real estate asset’s performance over time. The role of the asset manager is to work with other stakeholders to execute on a strategy and meet specific objectives. The following article quantifies key challenges owners and asset managers are confronted with today.

A diversity of assignments has provided HVS with insights into the state of the national hotel industry, which is rarely discussed with substantial support of financial analysis. Drawing on experience in valuation, asset management and feasibility, the following article gives illustrates systemic challenges and explores avenues forward.

Our sample of data includes a wide range of hotels across first-, second- and third-tier markets from midscale to luxury and corresponding service scopes. The data was collected over the last three years.

To the chagrin of owners, operators can manage Gross Operating Profit (GOP) margins effectively by controlling labour cost. However, there are structural constraints to profitability. The nature of the industry presents a mix of fixed of variable expenses associated with key operating departments. While having the opportunity to control variable expenses during a period of high utilization, managers are confronted with a wall of fixed expenses during periods of low utilization. We have analysed the two major operating departments of hotels: rooms and food and beverage. 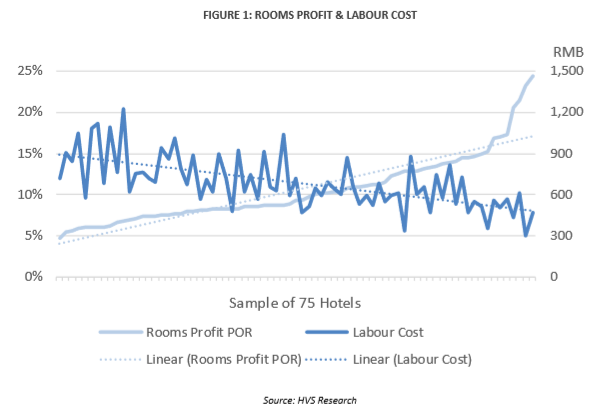 Going beyond the relation outlined in the Figure 1, there is a striking back story. Less than half the properties reviewed have rooms profit POR of more than RMB600, which directly stems from modest average rate performance. This should be much more of a headache among owners that invest a considerable amount into the real estate that fails to produce sizeable profits from its key operations. We shall investigate further below, how the lack of thorough economics in the development of hotels has largely disqualified the asset class as self-contained investment for a substantial period of time. 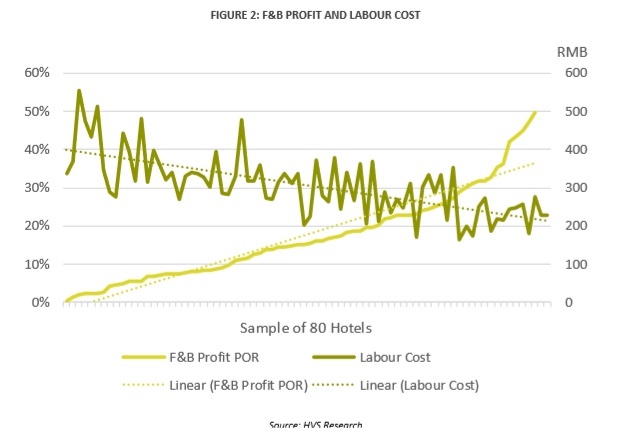 It goes without saying that it is evidently significantly more difficult to drive profitability out of food and beverage than rooms. In light of the cost of real estate in general, it thus becomes a way for owners to argue against sizeable food and beverage operations. In more mature markets this trend has long taken hold and disciplined investors subscribe to more efficient operating models. 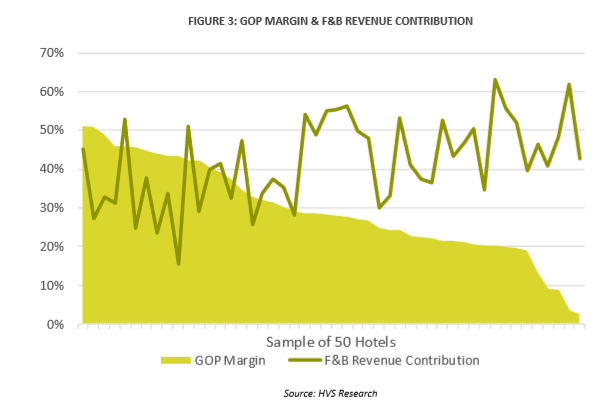 F&B Revenues do in general not support higher GOP margins. Some hotels maintain strong F&B operations (others simply have poor rooms performance) but the limited profitability does not make for a better bottom line. The graph shows that most hotels struggle when F&B revenues constitute more than 40% of total revenues. The ‘safer’ area is for F&B to account for closer to 30% in order to drive healthy GOP margins. Top third of the properties in the sample exceed a GOP margin of 30%. As asset managers we review outlet profitability and implement programs and projects to maximize real estate returns, which at times can be at odds with operators. 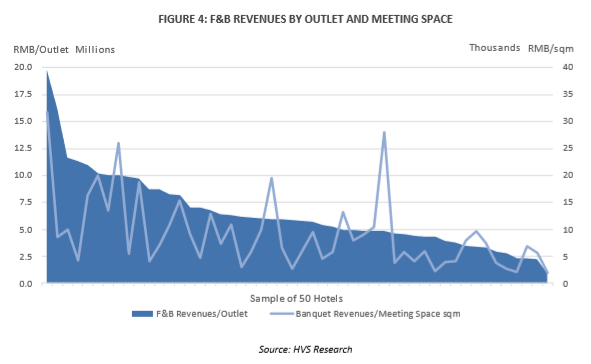 Figure 4 charts the average F&B revenue per outlet and banquet revenues per square meter. As shown, average annual revenues of up to RMB7,000,000 per outlet are reasonable to attain. Top performing properties can generate more than double that amount. Banquet revenues vary widely – seemingly unrelated to outlet performance, reflecting poor utilization through a collusion of overbuilding or overdesigning. The benchmark here should be RMB10,000/m2 and target at RMB15,000/m2. The yield guidelines from both F&B outlets and banquet space should be adjusted for market orientation, service scope and market/location to derive reasonable performance levels for budgeting purposes.

The main challenge in real estate is that not only is it capital intense but also forbiddingly costly to make major alterations once built. The rigid development guidelines by local governments supported by ‘hardware first’ mindset and compensated for by ulterior objectives (profits) have put the industry between a rock and a hard place. As analysed in an article of 2011, the vast majority of hotel developers in China will be unlikely to exit their investments at a significant profit. At the same time, due to a somewhat understandable reluctance for write-downs, a cure the industry is not on the horizon for the time being. This will prevent reasonable asset pricing and continue limit liquidity in a market that could be very active. 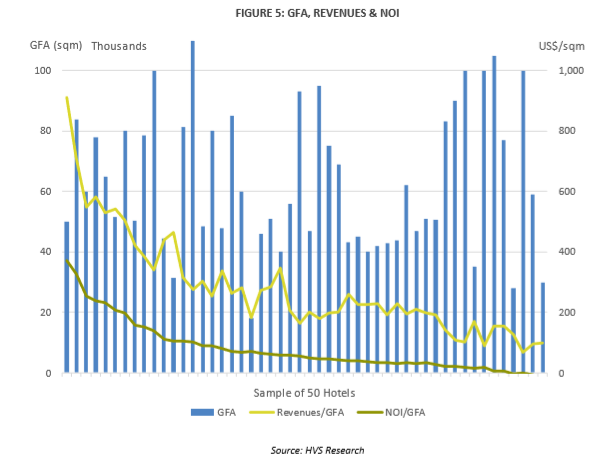 The first notable observation is that the average GFA per property in the sample is approximately 63,000m2. At an average room count of 330 units this is equates to the fantastic size of 189m2 GFA per room. Fuelled by the factors outlined above and facilitated by certain brand standards, the smallest ratio is 93m2 — reasonable to say that vast majority of the sample hotels are ‘over-spec’d’ and over-built. This begets the argument that a consultant must have been involved in one of those to prepare a feasibility study and didn’t do a good job. While that might well be true in some cases, the scenarios we encounter at HVS more often than not present themselves were GFA allocations for hotel use has already been made under the forces outlined above. The hotel development then presents itself with a significant prize tag that cannot be dodged at the micro-level and detrimental to the urban environment at the macro level.

Further observations from the graph show that the hotel GFA should be less than 50,000 sqm. Any larger GFA allocations would rarely warrant greater revenues per GFA under the law of diminishing returns or in layman terms ‘bigger isn’t better’. As a quick check for owners, total revenues/GFA above US$200 or RMB1,400/m2 is reasonable, and good at above US$300 or RMB2,000/m2 based on the sample analysed. In terms of NOI/GFA, performance at or above US$100 or RMB700/m2 is good, both achieved by only a small share of the sample.

Using the different data points gathered and making certain assumptions on ramp-up period, land and construction costs an indicative payback period calculation can be applied. The analysis was converted to US dollar for easier scaling. 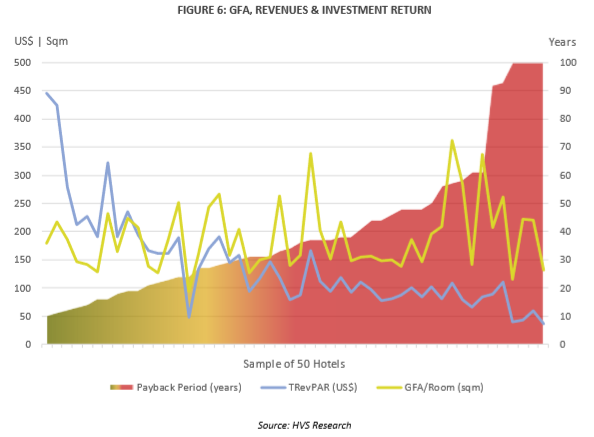 As shown in the Figure 6, there is modest correlation between the GFA/room and payback period, with a reverse L-curve on the payback period. As the graphs shows, bigger isn’t better, rather the opposite. Intriguingly, hotels with a larger GFA seem to struggle to yield effectively, suffering from lower utilization. This phenomenon can be traced back to the same factors outlined above. For well-managed hotels, TRevPAR is the most relevant indicator for investment returns. Assuming standalone developments, only 5 out 50 hotels have an appealing payback period and another 5 can be deemed feasible at payback period of under 20 years. The other 40 hotels have an average payback period of 47 years (in excess of their lease term). The top-performers are all located in first-tier markets and surprisingly are high-end, full-service hotels. The most tell-tale sign for top performance: prime location.

Valuing hotels is a particularly challenging in an illiquid market; the current market shows mindboggling pricing gaps. As a result, the Chinese hotel industry has seen limited activity in the recent past. The table in Figure 7 shows hotel transactions recorded by Real Capital Analytics over the last 24 months. 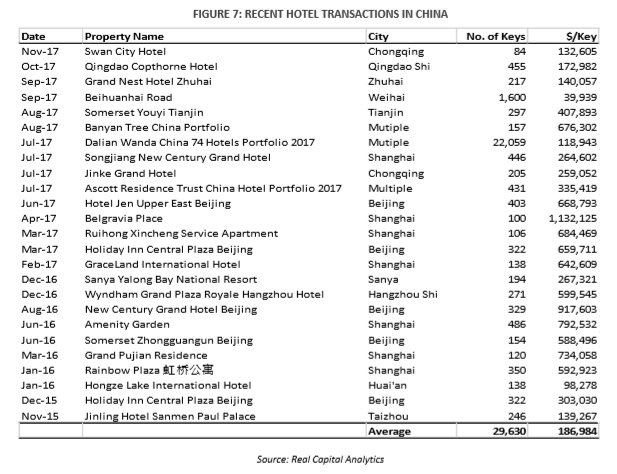 As indicated in Figure 7, the average price of close to 30,000 transacted hotel rooms within the last 24 months was US$186,984 or approximately RMB1,200,000. This should give any reader with an understanding of development costs serious pause. Based on a GFA per key of 189m2, this implies a construction cost of approximately RMB6,500m2. There cannot be a louder wakeup call for developers looking to exit their projects without major write-downs. Readers might argue that certain transactions in Beijing and Shanghai actually attained respectable prices – don’t be fooled, those hotels usually have a much stronger performance and the value of the underlying land must not be ignored.

This article provides beyond a doubt supporting analysis that a more disciplined area program can lead to better utilization, better yields shorter payback periods and reasonable options to divest assets at a profit. Under the law of diminishing returns, the overbuilding of years past has created assets with significant functional obsolescence and in some cases external obsolescence when those who were meant to come never showed. Proactively negotiating GFA allocations for components of a development is fundamental for the future of this asset class. There has already been a notable change in sentiment, however, it was unfortunately not driven by improved economic analysis. For existing hotels with areas of obsolescence, the asset manager will work to identify and implement adaptive reuses; examples from the shared economy should be considered. Several hotels have introduced co-working spaces into their properties, which make the development appealing to a broader market. At the same time, other supporting facilities must be created or aligned for a harmonious integration.

The journey of turning non-performing assets around starts with a performance analysis and the property audit. Based on the review of the operating and supporting departments, CapEX requirements and any capital requirements or obligations a detailed asset plan will be developed. The asset manager will develop this plan on behalf of the owner and cooperate with the manager or operator to attain any of the objectives initially identified. These objectives are embedded in a wider strategy defined by the holding entity.

The rapid development of China’s hotel industry has seen an unprecedented amount of supply come online since the turn of the millennia. Owning hotels requires a distinct skill set to maximize asset performance over time. %%ViewCount%% Views Comments
Share:
Subscribe To Newsletter