With demand levels on the rise and several redevelopment and revitalization projects occurring in the area, the Coachella Valley is experiencing a renaissance.

The Coachella Valley extends for approximately 45 miles in Riverside County and comprises the following nine cities: Palm Springs, Rancho Mirage, Palm Desert, La Quinta, Indio, Indian Wells, Desert Hot Springs, Coachella, and Cathedral City. Typically, the population of these desert cities nearly doubles during the winter months by growing interest in leisure travel, improving convention business, and large-scale events, supplemented by part-time residents from colder climates due to its warmer temperatures. Tourism is the major industry in this area, with a variety of attractions and special events drawing significant numbers of leisure travelers. The market area is experiencing a period of economic strength as it continues to benefit from its position as a resort destination. With demand levels on the rise and several redevelopment and revitalization projects occurring in the area, the Coachella Valley is experiencing a renaissance.

Tourism has been the cornerstone of the local economy for some time; however, this sector has realized notable growth during the last several years, as a younger generation is discovering the city and new destinations, such as the Hard Rock Hotel, Hacienda Beach Club, and the Ace Hotel & Swim Club, appeal to this demographic. The popularity of special events and festivals, such as the Coachella Valley Music & Arts Festival, is intensifying, which bodes well for the local economy. The Greater Palm Springs Convention & Visitors Bureau reported that tourism in the Coachella Valley has an annual impact of over $6 billion and is responsible for one in every four jobs. Moreover, new stores, restaurants, and other commercial developments have been developed after a period of little to no growth. Chic hotel projects such as Kimpton’s The Rowan, ARRIVE Palm Springs, The V Palm Springs, and Marriott’s Autograph Collection Hotel PASEO have recently opened, while others such as the Hyatt Andaz and the Virgin Hotel have resumed construction. Residential construction has also regained traction in recent years, with several projects currently active throughout the Coachella Valley. The Valley is also an important site for renewable energy, with major wind-farm installations located in the San Gorgonio Wind Park just north of Palm Springs. Activity related to the maintenance, development, and harvesting of energy from the over 2,700 windmills is a major economic contributor.

Tourism in the Coachella Valley is strongest from January to May, when the area enjoys cooler desert temperatures but a warmer climate than most other cities; the weather is especially welcoming to those visiting from the northern regions. The area's popularity as a resort, golf, and tennis destination makes tourism a critical component of this market's economy. The Coachella Valley is well known for several signature events, including Coachella Valley Music & Arts Festival, Stagecoach Country Music Festival, Indian Wells Masters/BNP Paribas Open, Modernism Week, the Palm Springs International Film Festival, April's LGPA Kraft Nabisco Championship, and the White Party. The BNP Paribas Open tennis championship draws over 400,000 visitors to the Valley in March at the Indian Wells Tennis Garden, while The Coachella Valley Music & Arts Festival and Stagecoach Country Music Festival combined attract upwards of 245,000 visitors to the Valley every year in April. 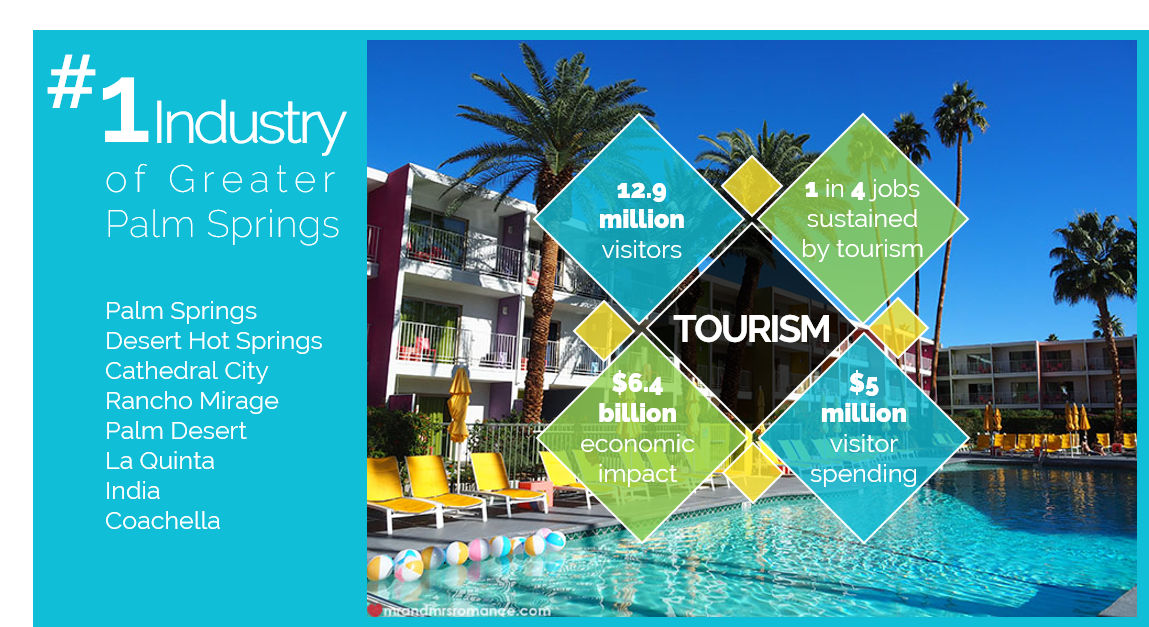 Downtown Palm Springs is a popular tourist destination for shopping, dining, and entertainment, as the the area is replete with a wide variety of dining options and eclectic boutiques. The Palm Springs Art Museum is another popular downtown venue, which features an impressive collection of Marc Chagall, Pablo Picasso, and Andy Warhol pieces, among others, and a 430-seat theater. Downtown also features the significant Spa Resort Casino, which offers an expansive gaming floor and special entertainment events, as well.

The Palm Springs Aerial Tramway is the world's largest rotating tramcar. The tram offers a ten-minute ride into the cliffs of Chino Canyon and is a popular attraction for visitors who may be camping in the summer or cross-country skiing in the winter. About 20 miles northwest of Palm Springs are the popular Desert Hills Premium Outlets, featuring over 170 stores. El Paseo is another popular shopping destination, located roughly ten miles southeast of Palm Springs in the city of Palm Desert.

The Coachella Valley features approximately 125 golf courses and clubs, thus earning it the title "Golf Capital of the World." Notable changes related to the area's golf courses include the planned construction of a 140-luxury hotel and spa, as well as a four-star, 200-room lifestyle hotel at the SilverRock Resort in La Quinta; both hotels will be affiliated with Montage Hotels & Resorts. Swimming, tennis, horseback riding, and hiking in the nearby desert and mountain areas are also popular forms of outdoor recreation in the area. The Little San Bernardino Mountains, the Colorado Desert, and the Mojave Desert are the three unique ecosystems that make up Joshua Tree National Park. This 800,000-acre park offers unprecedented displays of desert wildlife, plants, and rugged terrains.

The Coachella Valley is primarily dependent on FIT-related leisure demand. Leisure demand constitutes approximately 65% of the overall accommodated demand in the Valley. The balance comprises demand from the commercial (15%) and group (20%) segments.

The Coachella Valley is undoubtedly operating with the highest occupancy and average rate (ADR) levels experienced in the last decade. With the market’s recent increases in supply, further occupancy growth will likely be muted, as the new supply serves to moderate the market’s strong demand growth. ADR growth should continue to increase in the near term as seasonality factors will limit further occupancy growth, forcing hotels to maximize revenue through an increase in average rates. The recent openings of new high-quality hotels, particularly those branded with luxury affiliations, as noted above, should also serve to increase the market’s rate positioning and cachet with well-heeled travellers, and to attract demand to the market that would not have otherwise visited were it not for the availability of the new properties.

The Coachella Valley hotel market, offers approximately 140 hotels with 15,000 hotel rooms. The Coachella Valley, and specifically, Palm Springs, is  undergoing a renaissance in its hotel sector. Below is a selection of publicly announced projects that have recently opened, are under construction, or proposed for the market.

As of year-end 2017, approximately 784 new hotel rooms had opened in the market, representing a 5% increase in supply. An additional 801 rooms remain under construction, with planned hotel openings in 2018 and 2019.  A larger number of projects remain proposed, totaling 791 rooms. Assuming all proposed projects open by 2020, this would represent an additional increase in supply of approximately 10% over three years. Considering the market has experienced an increase in demand of nearly 50% since the last recession of 2009, it is safe to assume that any future supply increases will have minimal impact on the market’s performance.

The outlook for the Coachella Valley remains positive. The Convention & Visitors Bureau published a goal to increase tourism visitation to the Valley from 12.8 million visitors to 16.8 million by 2026, representing a 30% increase over the next eight years. With this market’s rapidly growing popularity as a tourism destination, replete with attractions, events, and a steady increase in demand, at the current pace, the market will certainly meet this goal in the next eight years, justifying the current renaissance in the market’s hotel sector and necessitating the planned expansion or new supply proposed for the market. Our relationships and frequent interactions with major lending institutions across the nation reveal a growing apetite from the lending sector to finance high-quality assets in this market given the strong market fundamentals, as shared in this article, further incentivizing those development teams with an interest in the Coachella Valley.

With demand levels on the rise and several redevelopment and revitalization projects occurring in the area, the Coachella Valley is experiencing a renaissance. %%ViewCount%% Views Comments
Share:
Subscribe To Newsletter