Seychelles continues to prove its popularity in the European market as a hideaway holiday destination while gaining reputation in the Middle Eastern and Asian markets.

Seychelles continues to prove its popularity in the European market as a hideaway holiday destination while gaining reputation in the Middle Eastern and Asian markets.

Republic of Seychelles is an archipelago of 116 islands located in the Western Indian Ocean east of East Africa. Across all 116 islands, Seychelles has a total land area of 455 square kilometers. The country consists of two distinct island groups: the Mahé group, in the north, and a chain of low-lying coral islands stretching away to the south. All of the country’s principal islands belong to the Mahé group; they include Mahé Island (the largest at 27 kilometers long and 11 kilometers wide), Praslin Island, Silhouette, La Digue and 28 smaller islands. The 83 coral islands are largely without water resources, and most are uninhabited. The population of Seychelles (2017 estimate) is 93,920. Victoria, on Mahé Island, is the capital, principal city and leading port of Seychelles. While more than 75% of the country’s population lives on Mahé Island, about 10% on Praslin, and others on La Digue and the outer islands. 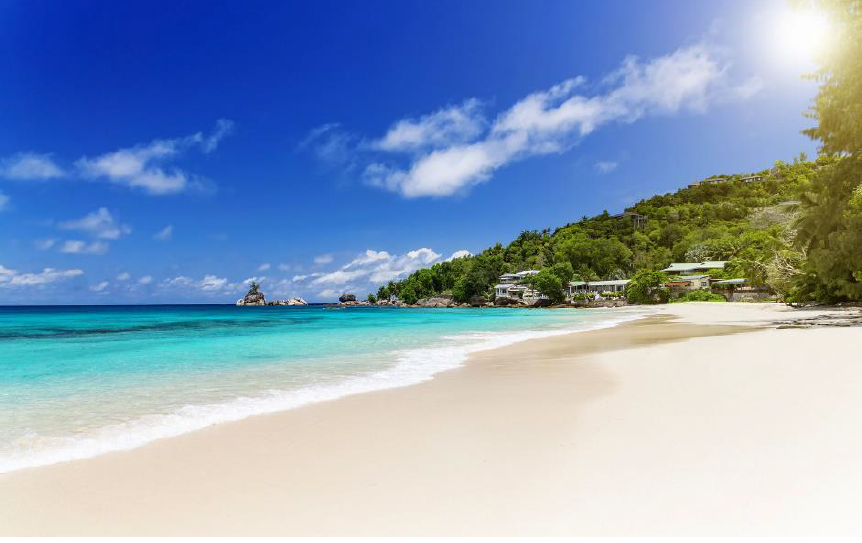 Seychelles is known for its coral beaches, opportunities for water sports, UNESCO heritage sites, its abundant wildlife and nature reserves and its year-long tropical climate. The government of Seychelles strictly controls tourism development in the country to protect and conserve the fragile ecosystem of the islands, and also to enable the long-term sustainability of the sector, which depends heavily on the country’s ecological offerings. According to the National Bureau Statistics, 349,861 visitors travelled to Seychelles in 2017, representing a growth of 15.4% between 2016 and 2017. Between 2007 and 2017, international arrivals to Seychelles grew at a compound annual growth rate (CAGR) of approximately 8.1%. As shown above, Seychelles demonstrated continuous growth over the years, with the exception of the global economic crisis in 2008 and 2014. 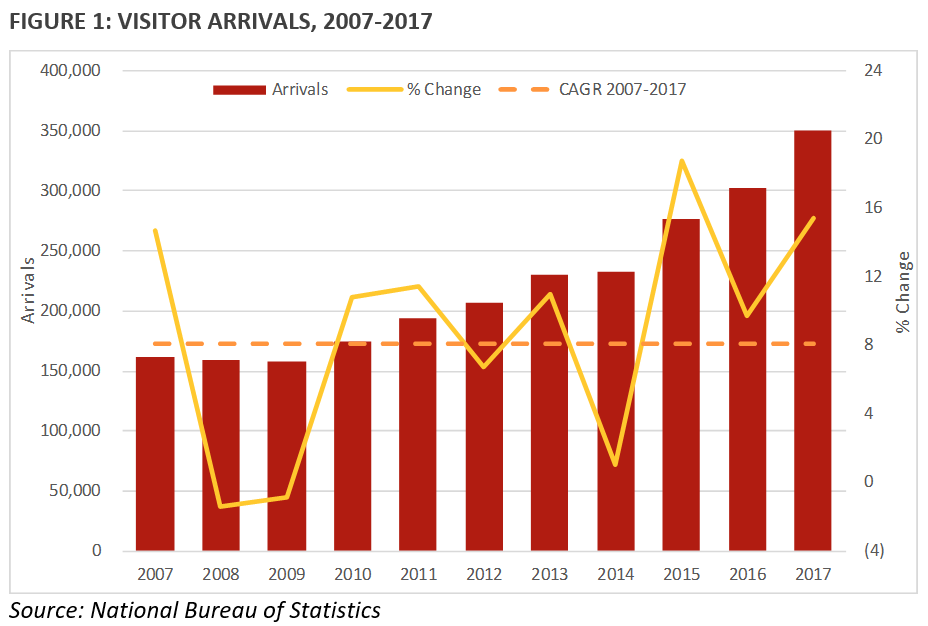 Since its opening in 1971, the Seychelles International Airport (SEZ) has been contributing to the healthy performance of the tourism sector with the arrival of new airlines and increasing flights of existing routes. As of January 2018, international airlines that service Seychelles include Air Austral, Air Seychelles, Condor, Emirates, Ethiopian Airlines, Etihad Airways, Kenya Airways, Qatar Airways, SriLankan Airlines. These flights connect Seychelles with international hub cities such as Bombay, Dubai, Istanbul, Johannesburg, and Paris. Seasonal flights are currently offered by Arkia, Austrian Airways, and Sun D’Or from Tel Aviv and Vienna.

Despite the financial crisis in the Euro zone over the past few years, Europe still account for the lion’s share of the Seychelles’ tourism market (62%). This implies that the seasonal demand is pegged to European holiday periods. The key feeder markets are France, Germany, and Italy which account for more than half of the European market. France continued to be the largest feeder market, totalling 14% of total international arrivals in 2016, with a 15% increase of visitors compared to arrivals in 2015. In the
same year, arrival growths from Italy grew by 5% while Germany increased by 10%. 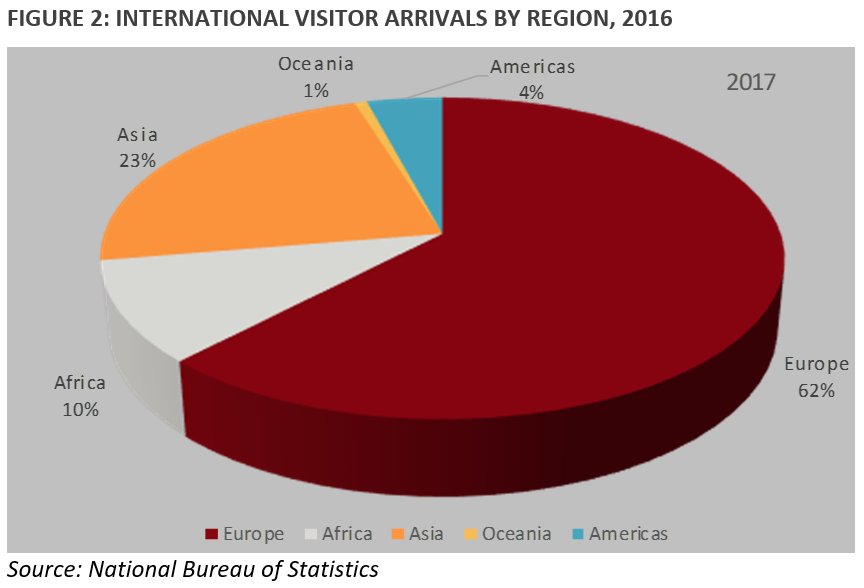 To diversify from the mainstream inbound tourism markets, Seychelles has changed its tourism strategy to tap into new and emerging markets that have latent potential for growth, such as Asian markets like the Middle East, China, and India instead of focusing its marketing efforts on its primary and traditional
tourist markets. United Arab Emirates (UAE) accounted for 8% of the total arrivals in 2016 while China and India recorded 5% and 4% respectively. Seychelles Tourism Board hopes to strengthen this market with flights from Abu Dhabi, Dubai, and Bombay.

From data obtained from the National Bureau of Statistics and historical records, we have analysed the seasonality of visitor arrivals from the period 2007 to 2017. The peak season lies from October through April, coinciding with the best months for diving and fishing and holiday seasons. In particular, the period from February to April see a large increase in visitor arrivals because of the winter in Europe, as do the summer months of July and August. The low season falls from May to June, even though this time of the year is characterised by drier weather and cooling breezes. 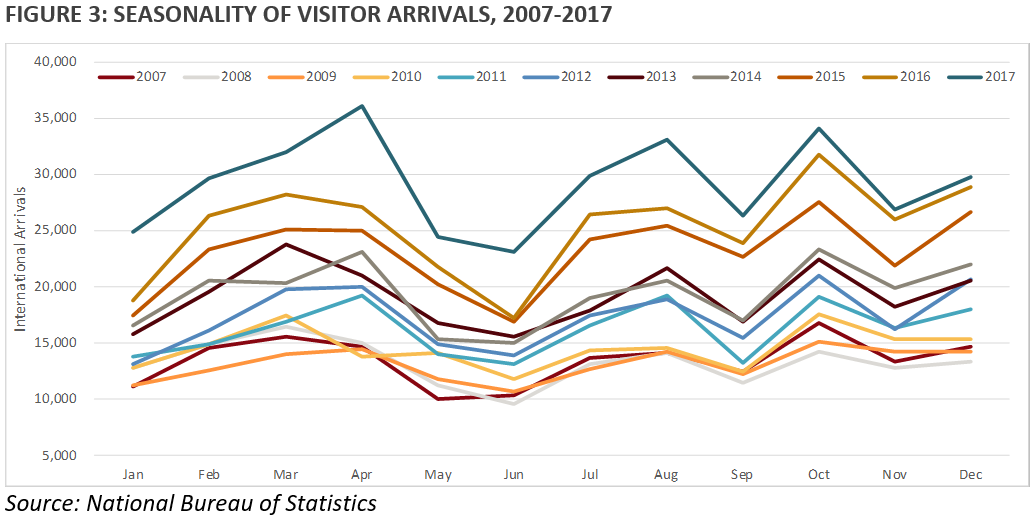 As expected, the majority of the visitors travel to Seychelles for holiday purpose. In 2016, leisure
travellers accounted for approximately 94% of the total arrivals. Business segment represented about 3% of the total arrivals. 2% of the arrivals travel to Seychelles for other purposes such as crew and transit. Following figure provides a breakdown of overnight visitor arrivals by purpose of visit. 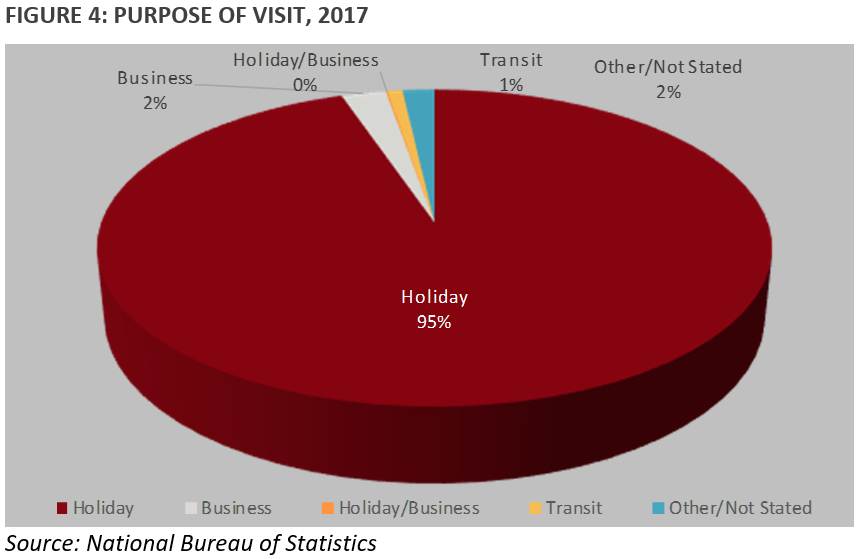 In 2007, Seychelles market recorded 2,710 rooms available. As the destination slowly gained interest from both guests and investors, Seychelles doubled its supply to over 5,700 rooms in 2017. In 2014, the market recorded a 42.6% supply increase due to hotel openings such as the AVANI Seychelles Barbaron Resort & Spa, Eden Bleu Hotel, and Savoy Seychelles Resort & Spa. Aside from the resorts openings, there was also a noticeable increase in guesthouses and hostels around the two major islands, Mahé and Praslin. Since the supply boom over 2014 and 2015, the supply maintained a modest growth rate of around 5% in 2016 and 2017. 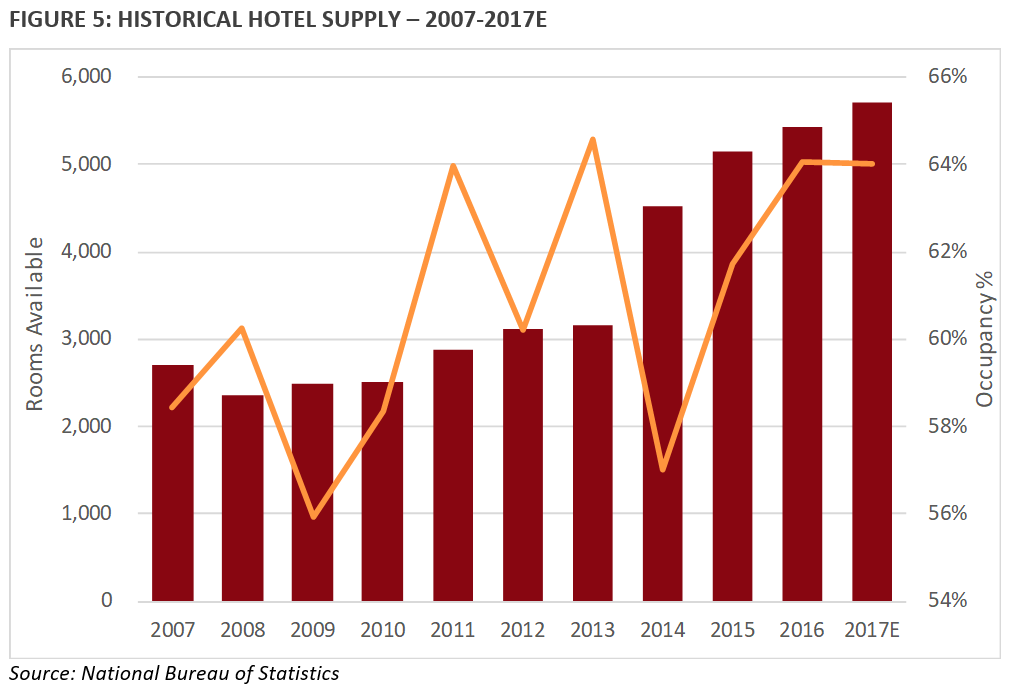 In terms of occupancy, the Seychelles market has registered a relatively stable performance over the years. Albeit the strong supply growth, occupancy level generally recorded around 60%. In 2014, occupancy level slightly weakened due to the new supply. However, demand grew in par with supply in the following year, resulting in a 62% marketwide occupancy in 2015. With the rise of visitation to Seychelles in 2017, we estimated an occupancy level of 64% for 2017, indicating a 5% increase in room
nights sold.

The below figure illustrates the monthly marketwide occupancy for the past eight years. The monthly occupancy breakdown for Seychelles hotel market generally follows the visitational seasonal trend. February is the highest occupancy month, as it is the most severe winter month in Europe. June is the slowest month as a result of the comparatively cooler weather in Seychelles. 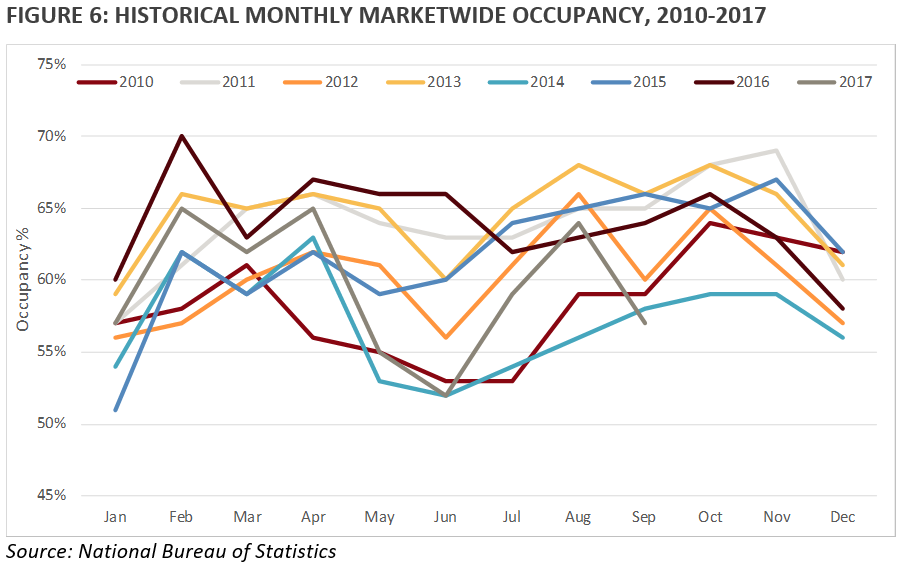 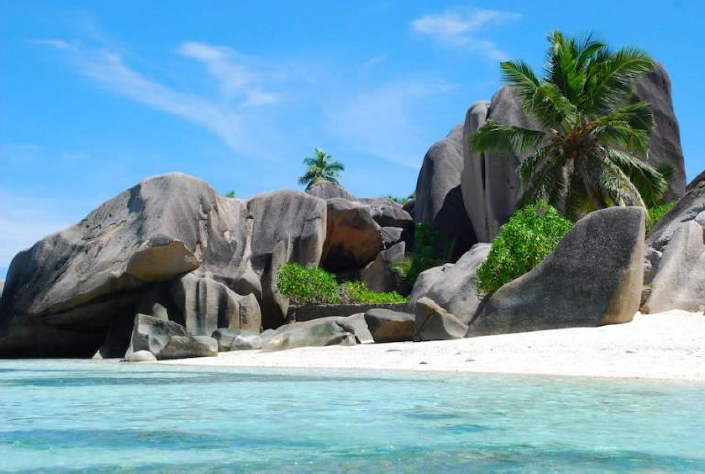 Over the years, the average length of stay Seychelles has averaged around 10 days. From 2009 to 2016, the lowest monthly average length of stay record was 9.0 days in February 2014 and highest was 11.8
days in August 2010. Although some guests prefer to stay in more than one resort during their trip, they typically remain in Seychelles for more than a week for a complete island getaway experience.

Over the years, Seychelles maintained as a well-recognized island for European markets such as the French, German, and Italian. Despite the mediocre performance of the direct flights from Beijing, Seychelles Tourism Board continued to promote in China and the Middle East as emerging markets for Seychelles. With other holiday hotspots are impacted by natural disasters, political turmoil, and terrorist attacks, Seychelles proves to be a fairly safe country for travellers from around the globe. All in all, Seychelles tourism is expected to sustain a positive progression in the future years.

Seychelles continues to prove its popularity in the European market as a hideaway holiday destination while gaining reputation in the Middle Eastern and Asian markets. %%ViewCount%% Views Comments
Share:
Subscribe To Newsletter