This market snapshot provides an overview of the 2017Q4 performance of the tourism industry in Taiwan, particularly visitor arrivals and lodging markets data.

The positive impact from Taiwan’s tourism source market diversification supported its increase in visitor arrivals, which witnessed a 10.1% YoY rise to 3.1 million in 2017 quarter four. To compensate for the loss of mainland Chinese tour groups, Taiwan strategically improved its relationships with other Asian countries, particularly in Southeast Asian countries. Notably, South Korea passed the 1 million visitor arrivals mark in the fourth quarter. Amid the shift of source markets, hotel players in Taiwan experienced the rebalancing towards more value-based demand.

From the time when the current Taiwan president Tsai Ing-Wen came to power in May 2016, her political strategy was not to further improve relations with mainland China. As a result, the Taiwanese tourism industry suffered the withdrawal of mainland Chinese visitors which plummeted by 22.2% to 2.7 million in 2017. However, Taiwan still managed to offset the loss with visitors from South Korea and Southeast Asian countries, reaching a marginal growth of 0.5% in visitor arrivals in 2017.

In 2017 Q4, the top five feeder markets were mainland China, Japan, Hong Kong and Macau, South Korea, and Malaysia. Although the increase of mainland Chinese visitors was significant in the fourth quarter, a 18.3% YoY growth to 756,000, the total number of visitors was still 29.5% lower than the same period two years ago in 2015. For Japan, Hong Kong and Macau, these markets did not post any significant change in Q4. Japan noticed a slight increase in visitor arrivals by 0.7% YoY to 541,000, while Hong Kong and Macau combined saw a minor 0.8% YoY decrease in visitors to 427,000.

Ranking as the fourth largest source market, South Korea recorded an impressive 19.7% YoY growth in visitor arrivals to 306,000. More importantly, South Korea surpassed the 1 million visitor arrivals mark in 2017, reflecting a 19.3% increase in visitors compared to 2016. Similar to Macau, the continuous growth of South Korean visitors in Taiwan has been the result of successful marketing initiatives the Taiwan Tourism Bureau had implemented in the past few years, such as celebrities endorsements, advertising campaigns, and collaborations with local entertainment (TV show and film), as well as improved air connectivity with more direct and budget flight options.

To rebalance the shift in mainland Chinese demand, “the New Southbound Policy” was implemented in May 2016 to increase collaborations with other countries in South and Southeast Asia, as well as Australia and New Zealand, specifically in economic trades and exchanges. A major contributor to the improving tourism industry is the relaxation of visa restrictions for Southeast Asian countries, which greatly helped to offset the shortfall from mainland Chinese visitations. Malaysia, with a large ethnic Chinese population, was the fifth largest market source for Taiwan in Q4 of 2017, registered a 6.4% YoY increase in visitor arrivals to 180,000. This is followed by Singapore which is the sixth largest visitor provider, while the U.S. got pushed back to 7th place.

Looking forward, with the unpredictable political relationship between mainland China and Taiwan, Taiwan will continue to build relationships with other Asian countries in order to stimulate its tourism industry. In addition, Taiwan is aiming to become a “Muslim-friendly” place in order to attract more Muslim travellers. For example, over 150 hotels and restaurants are already serving halal-certified food and some are offering praying areas. 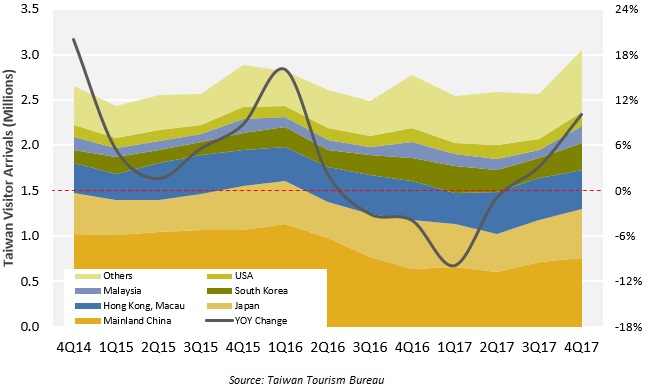 In 2017 Q4, the Taipei hotel market saw slightly positive improvement in performance with RevPAR growing at 0.6% YoY to NT$3,674. This growth was achieved by sacrificing average rate (ADR) by 2.2% YoY to NT$4,510 in exchange for an increase in occupancy by 2.9%, which was recorded at 81.3% in the same period in 2016. Taipei hotels continued to rebalance their pricing strategy in light of the shift to more value-based demand. 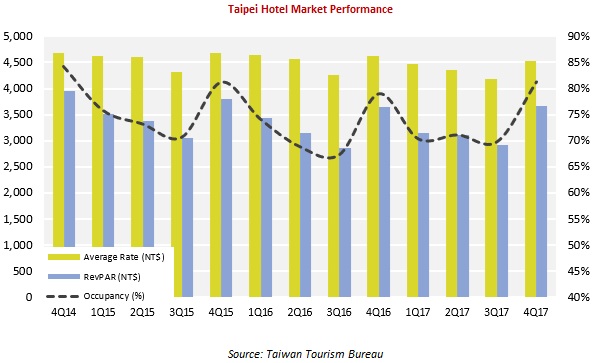 On the contrary, Kaohsiung hotel market experienced a decline in performance. Both occupancy and ADR registered a YoY decrease by 5.3 percentage points and 1.7%, respectively, to 64.9% and NT$2,393; bringing RevPAR down by 9.2% to NT$1,553. Kaohsiung was once a destination for mainland Chinese group tours; hence, the shift in visitors source markets that are mostly Taipei-bound, affected hotels in Kaohsiung considerably. 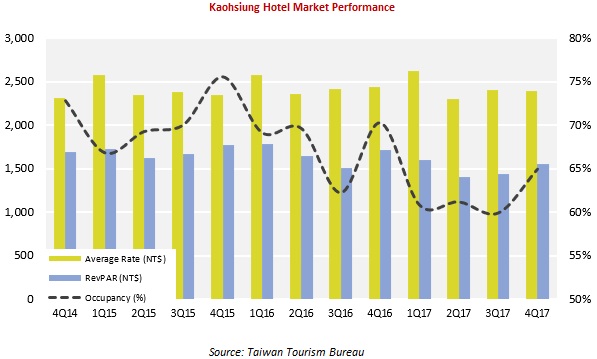 Compared to the fourth quarter of 2016, hotels in Taichung shifted their strategy by bringing up their average rate slightly by 1.0% YoY to NT$2,460, yet suffered from a 2.9 percentage points YoY decrease in occupancy to 73.8%. RevPAR declined by 2.8% YoY to NT$1,815. This is a reversal from the same quarter in 2016, when the market adopted a more value-based pricing to build occupancy. 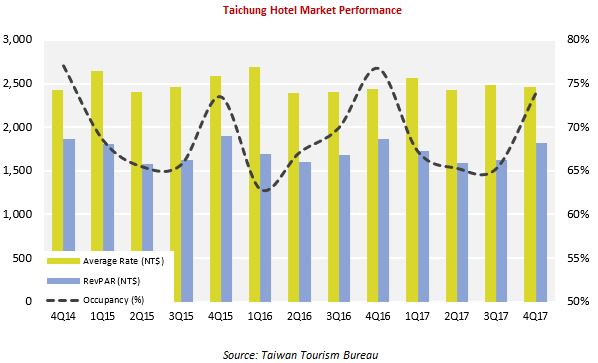 Overall in 2017, the increase in visitation from other regional source markets helped Taiwan to diversify after the loss of mainland Chinese tour group travellers. The marginal increase of mainland Chinese travellers in quarter four shows continued interest among mainland Chinese FIT visitors. As the Taiwan tourism industry continues to rebalance, Taipei fared significantly better than other markets, which used to be part of tour group itineraries but cannot draw the same number of regional FIT visitors, many of whom visit Taiwan for the first time.

This market snapshot provides an overview of the 2017Q4 performance of the tourism industry in Taiwan, particularly visitor arrivals and lodging markets data. %%ViewCount%% Views Comments
Share:
Subscribe To Newsletter