This market analysis explores the advantages and disadvantages of the HCC’s position in the convention industry and analyzes the differences in event types, attendance, room nights, and operations between the HCC and comparable mainland centers.


The State of Hawai‘i and the Hawai‘i Convention Center (HCC) are uniquely positioned in the US convention and meetings market. This market analysis explores the advantages and disadvantages of the HCC’s position in the convention industry. HVS analyzes the differences in the types of events, event attendance, room nights, and the financial operations between the HCC and comparable mainland convention centers.

It is often said that a great tourism market makes a great convention market. While this may be true of US mainland destinations, island convention destinations tell a different story. The logistical challenges of shipping event materials to Hawai‘i, the cost of airfare for out-of-state attendees, and the perception of Hawai‘i as a paradise vacation destination, and not a meetings destination, makes hosting large conferences, conventions, and consumer shows at the HCC more complex and expensive than hosting an event in a mainland convention center.


Honolulu is part of the greater O‘ahu economy, which is fueled in large part by the tourism industry, as well as by the government and military sectors. The year-round moderate climate is highly conducive to agriculture, especially the production of sugar cane, pineapples, macadamia nuts, and a multitude of exotic flowers. The City and County of Honolulu encompasses the island of O‘ahu and several minor outlying islands, including all of the Northwestern Hawai‘ian Islands. Therefore, according to the Guinness Book of World Records, Honolulu is technically the longest city in the world.

Hawai‘i, the Aloha State, was admitted to the union as the nation's 50th state in 1959. Hawai‘i consists of eight major islands and 124 minor islands, which form a chain extending more than 1,600 miles across the mid-Pacific Ocean. The islands are either volcanic in origin or are small coral atolls. These islands have an aggregate land area of 6,425 square miles, with a total of 750 miles of coastline. Honolulu, the state's capital and its largest city, is about 2,400 miles southwest of San Francisco and the United States mainland. Hawai‘i's eight major islands total ±4,112,000 acres of land, with the six primary islands accounting for approximately 98.0% of this area. Presented in order of descending size, these six primary islands are: Hawai‘i (“the Big Island”), Maui, O‘ahu, Kaua‘i, Moloka‘i, and Lāna‘i. The seventh island in size, Ni‘ihau, is privately owned. Kaho‘olawe, the eighth island, is presently uninhabited, and was previously used for military practice.

The HCC opened in 1998 and is the largest exhibition center in the state. It is located adjacent to the popular Waikiki District in Honolulu on the island of O‘ahu. With approximately 343,000 square feet of total function space, it’s size ranks in the midrange of venues in the United States. The exhibition hall of approximately 204,000 square feet is supported by a 35,000 square foot ballroom, and 104,000 square feet of meeting space. Over 15,000 hotel rooms are within a mile of the facility, but no hotel is immediately adjacent. The HCC is owned by the Hawai‘i Tourism Authority (“HTA”) that conducts the sales and marketing efforts of the HCC and contracts the operations to a management company. Originally operated by SMG, AEG began its first full year of operations in 2014.

Trends in event bookings at the HCC show how facility and HTA staff have responded to the unique challenges they face in booking events. The figure below shows the number of events at the HCC, by event type for the years 2008 through 2017.

FIGURE 1: ANNUAL NUMBER OF EVENTS AT HCC BY EVENT TYPE

Source: HCC as classified by HVS
The overall number of events has been slightly higher in recent years and the mix of event types has changed since 2008. Notably, the number of conventions and assemblies have declined while the number of banquets, conferences, and consumer shows have increased.

HVS analyzed the attendance at each type of event as shown in the figure below.
FIGURE 2: TOTAL EVENT ATTENDANCE AT THE HCC BY EVENT TYPE

Source: HCC as classified by HVS
The increase in attendance levels since 2013 reflects the shift toward more consumer shows, banquets, and other events that primarily attract local audiences. Convention attendance has varied from approximately 40,000 to over 100,000. The booking of one or two high impact events in any given year can cause this amount of variation.

HVS analyzed the requested room nights for each type of event as shown in the figure below.

Source: HCC as classified by HVS

Conventions have, by far, the largest impact on hotel lodging. While room night generation varies greatly from year to year, there has been no discernable pattern of growth or decline since 2013. This analysis demonstrates that the HCC faces a highly volatile market. The difference between a high demand year and a low demand year depends on attracting a few large convention events.

The HCC has the second most function space available among the set of comparable venues and Honolulu has the fourth largest population.

The table below shows the average number of events by event type for the HCC and the set of mainland convention centers. The data is from 2011-2017. Data from 2018 was not included because it is not a full year of data. 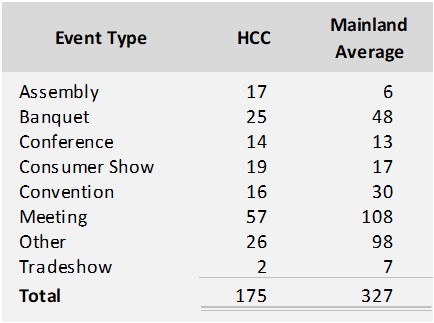 Source: Respective Venues
The HCC hosted approximately half as many events annually as the average of comparable mainland convention centers. There were eleven more assembly events at the HCC, which includes graduations and public speakers, and approximately the same number of conferences and consumer shows. However, there were significantly more banquets, conventions,  meetings, and tradeshows at the set of mainland convention centers.

Local area businesses and not-for-profit groups generate meetings and banquets events. The surrounding area in Honolulu is limited by the island of O‘ahu, its population, and business presence. The mainland convention center cities have a larger business presence and sprawling suburbs from which they can draw banquet and meeting demand.

The following figure shows the operating revenue, expense, and operating profit at the HCC and the set of comparable mainland convention centers. 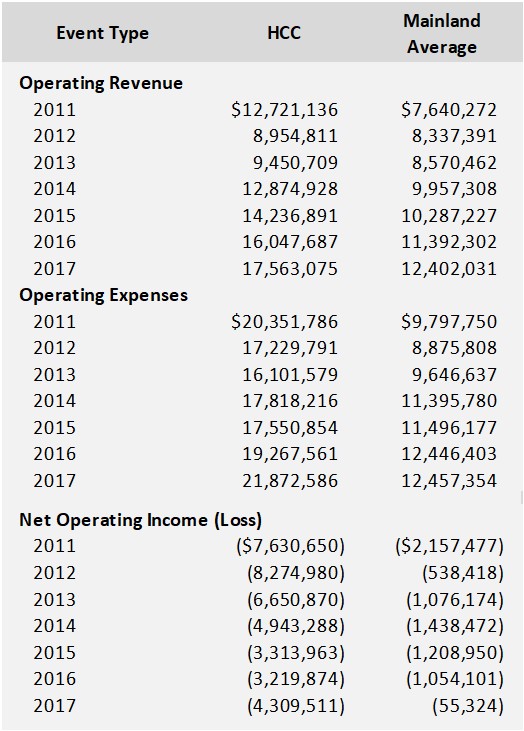 Source: Various Financial Reports, CAFR’s, and Annual Budgets
Comparing the operating revenue of the HCC to the average of the set of mainland convention centers shows that the HCC earned more revenue and grew at a faster rate than at the comparable mainland venues. Since 2012, HCC operating revenue nearly doubled while the set of mainland convention centers grew approximately 50%.

However, the HCC is in one of the most popular tourist destinations in the world, with a consistently pleasant climate, and the facility is well supported by the HTA and the State of Hawai‘i. The HCC previously relied on high-impact conventions to drive attendance and occupancy, but the market for those events has become more competitive in recent years. Reliance on events with local attendance has proven to be an effective strategy in keeping the HCC busy. 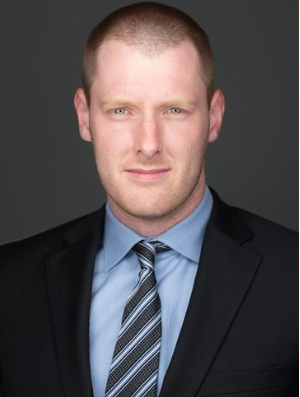 Anthony Davis graduated from Santa Clara University and the Harris School at the University of Chicago. He is an associate for HVS Convention, Sports, & Entertainment Facilities Consulting and serves as project manager for the HVS Annual Lodging Tax study.
Email: [email protected]

This market analysis explores the advantages and disadvantages of the HCC’s position in the convention industry and analyzes the differences in event types, attendance, room nights, and operations between the HCC and comparable mainland centers. %%ViewCount%% Views Comments
Share:
Subscribe To Newsletter