In Focus: Vietnam, Discover the Boundless Allure of the Land of Rising Dragon 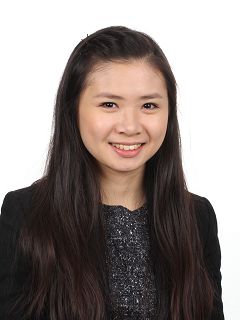 Vietnam is a coastal country located on the eastern edge of the Indochina Peninsula by the Pacific Coast of the Southeast Asian Region. It boasts 3,260 kilometres of coastline, which does not include the few offshore islands along its coastline. The country shares border with China to the north, and Laos and Cambodia to the west, equating to about 4550 kilometres of border. It is surrounded by the East Sea in the east and Southeast, and the bay of Thailand in the Southwest. Vietnam is home to more than 95.5 million people, making it the world’s 15th most populous country. The Doi Moi (economic reforms) initiated in 1986 and accession to the World Trade Organisation in 2007 has led to giant leaps in Vietnam’s economy.
Vietnam's Ten Leading Provinces 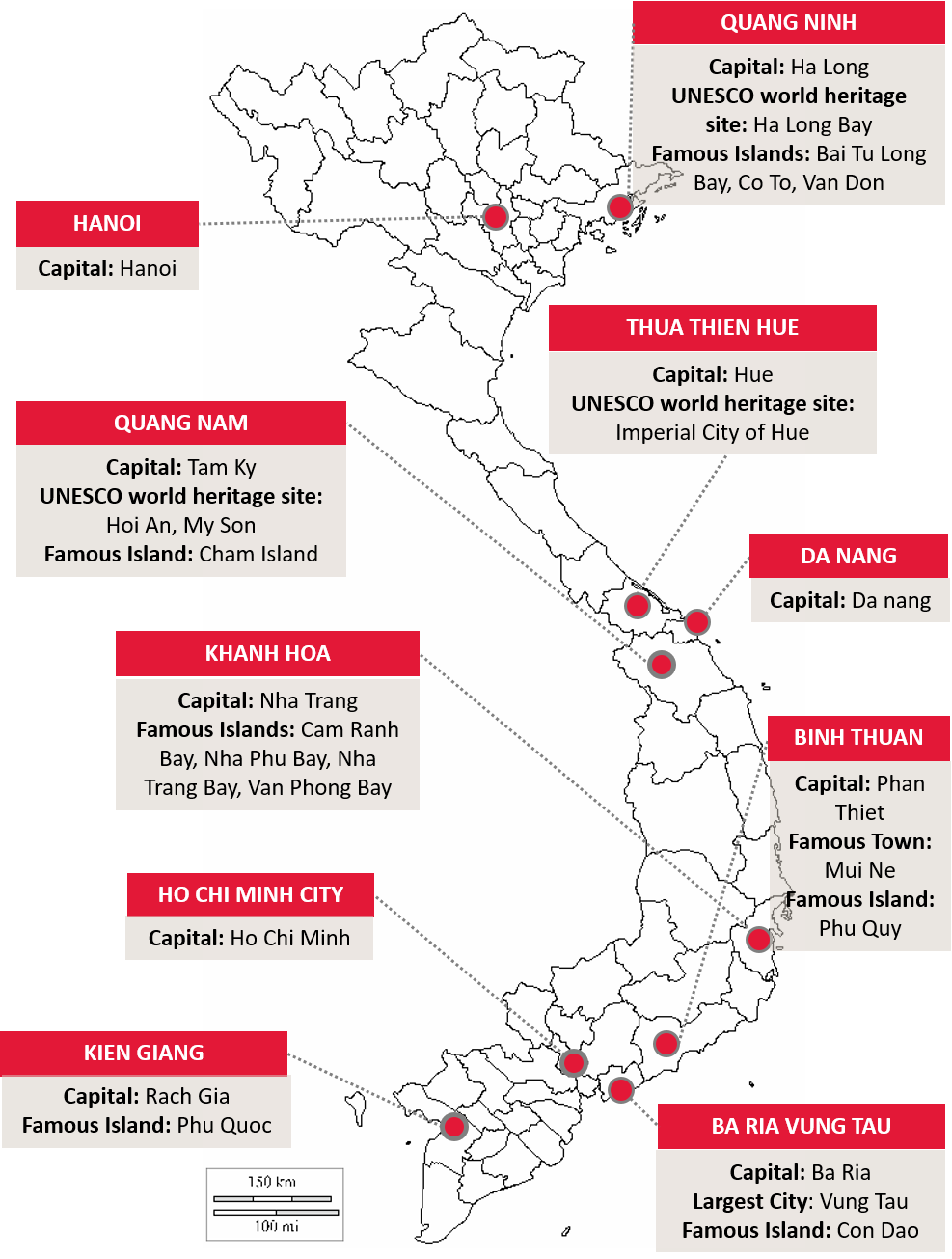 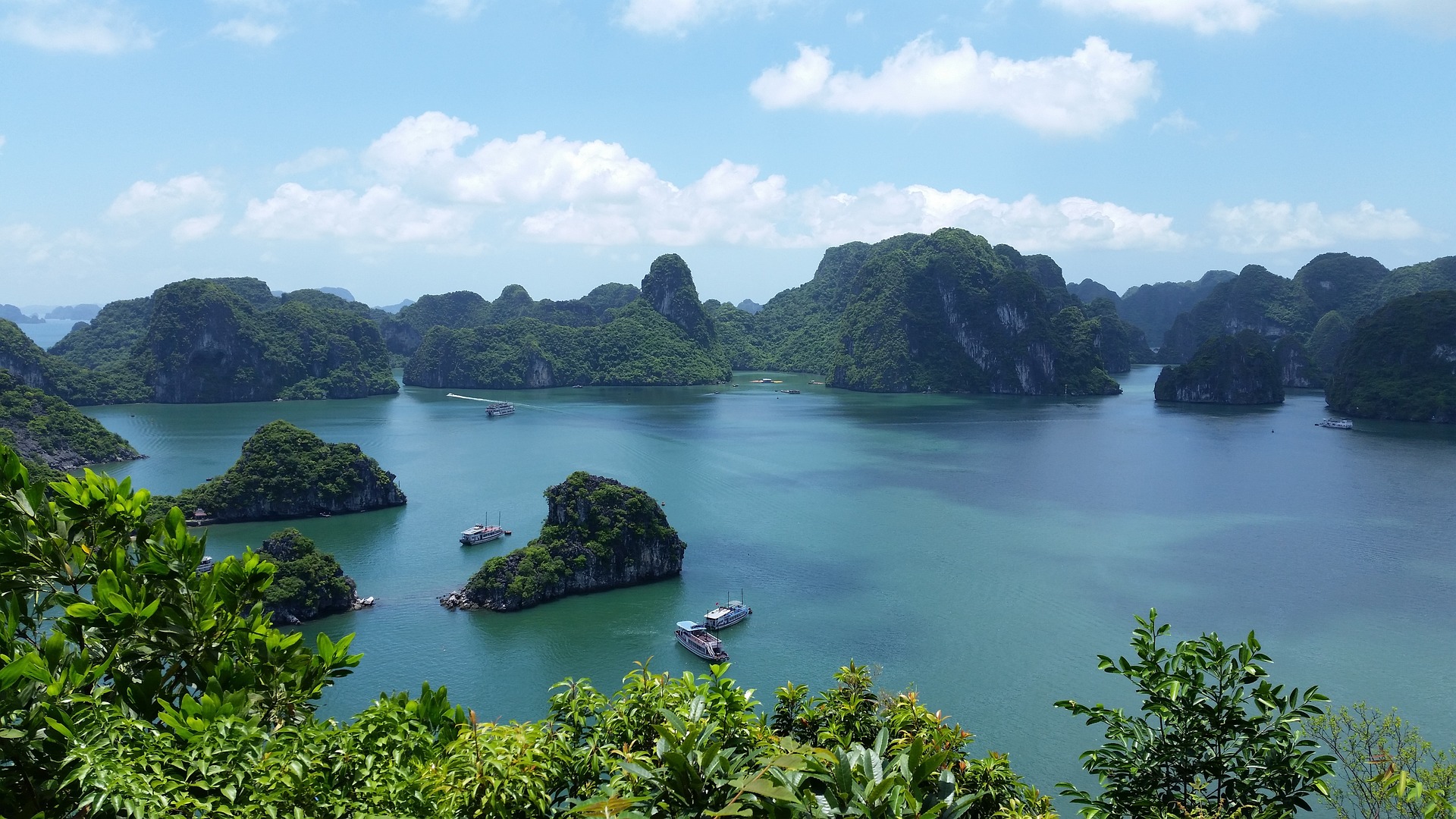 According to the World Travel & Tourism Council (WTTC) Travel and Tourism Economic Impact 2018 report, the direct and total contribution of Travel & Tourism to Vietnam’s Gross Domestic Product (GDP) was 5.9% and 9.4% respectively, making tourism one of the key supporting industries for the economy.

Underpinned by robust arrivals from South Korea and China, Vietnam’s tourism sector have achieved a double-digit growth for the third consecutive year to reach a record high of 15.5 million in 2018, up 20% year-on-year (y-o-y) in international visitor arrivals (IVA).

Under Vietnam’s Socio-Economic Development Strategy (2011-2020), the government seeks to focus on several key priorities for the year of 2019, including macroeconomic stability, quality and pace of economic growth, inflation control, productivity, trade, investment, and increasing the economy’s competitiveness.

Vietnam’s growth momentum remained robust in 2018 despite being a turbulent year globally. According to the World Bank, global economic growth is projected to lower for the next two years (2.6% in 2019 and 2.7% in 2020), gradually rising to 2.8% in 2021. Driven by the escalating trade tensions between US and China as well as rising production costs in China, Vietnam will remain as one of the low-cost alternatives for export manufacturing and fastest-growing Southeast Asia economies.

Vietnam’s economy ended 2018 stronger than expected, recording a 7.1% real GDP growth for the year. The growth was supported by the export-focused manufacturing and processing sectors. Moving forward, the Economist Intelligence Unit (EIU) forecasts Vietnam’s economy growth to soften to 6.9% in 2019. This is due to weaker global demand and rising trade protectionism.

Vietnam’s foreign direct investment  is expected to register stronger inflows, anchored by the country’s participation in several major free-trade agreements, the implementation of the Association of Southeast Asian Nations (ASEAN) Economic Community and several ASEAN-led bilateral deals. This is coupled with the recent entry as one of the eleven countries that will benefit from the Comprehensive and Progressive Agreement for Trans-Pacific Partnership.

SBV is anticipated to follow a pro-active and flexible monetary policy in order to control inflation and support economic growth in 2019. Amidst higher inflation and stronger external sector growth, EIU expects SBV to raise interest rates from 2021.

Vietnam’s inflation rate remained at 3.5% in 2018 and is expected to subdue in the following two years. This is being driven by a downward trend in global oil prices. EIU expects inflation to moderate to an annual average of 3.3% in the next five years.

According to the World Economic Forum (WEF)’s Global Competitiveness Report 2017-2018, Vietnam ranked 75th out of 140 economies in terms of infrastructure development, 22th for airport connectivity, 107th for road connectivity and 109th for quality of roads. In 2017, the Vietnamese government has approved to invest VND30 trillion (USD1.32) billion to develop tourism and transport infrastructure at major tourist destinations. These various key projects will be highlighted below: 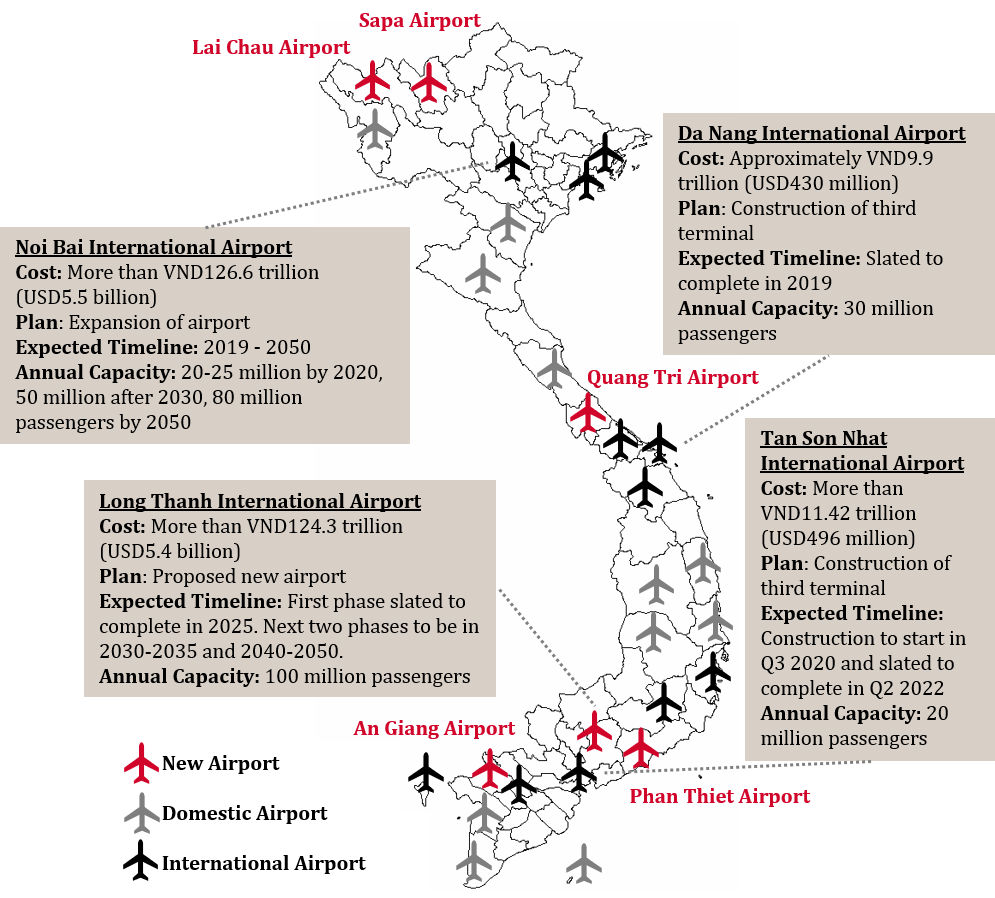 The governments of Laos and Vietnam have pledged to work together in the realization of the planned 555km railway line to link Lao’s capital, Vientiane with Vung Ang Seaport in Vietnam. The feasibility study of the railway has been completed in 2017 and is expected to cost USD5 billion. In 2018, Cambodia and Vietnam have agreed to push forward the 255km Bavet-HCMC railway project. The new link will be part of a region-wide network under the Trans-Asia Railway (TAR) project by United Nations Economic and Social Commission for Asia and the Pacific (UNESCAP) to connect Asia and Europe. A plan for an expressway linking Phnom Penh with HCMC is also under discussion. Below highlights project details of  new and upgrading railways:
Railways in Vietnam 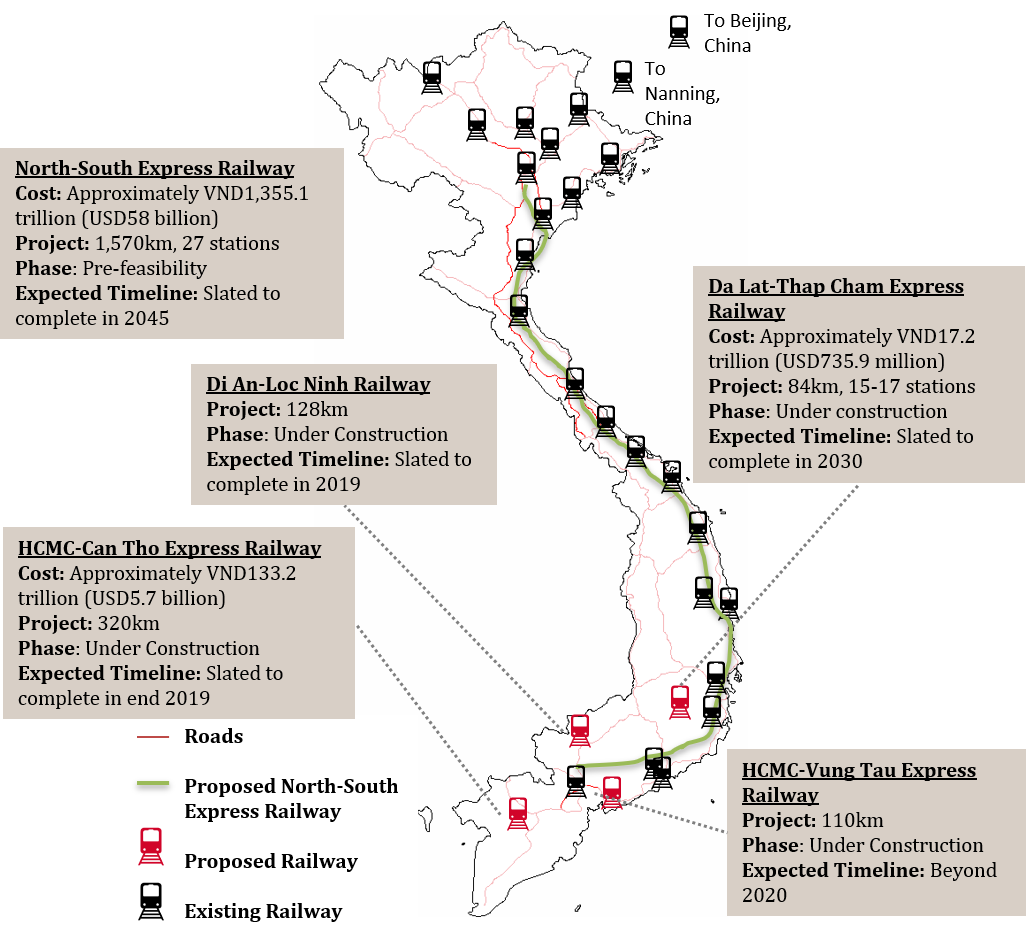 By 2020, Vietnam is expected to have 20 passenger ports with an estimated capacity of 5.52 million passengers per year. The larger ports of Vietnam includes Chan May Port (Thua Thien Hue), Halong Bay Port (Quang Ninh), Nha Trang Port (Khanh Hoa) and Tien Sa Port (Da Nang). Future ports under development includes My Thuy International Seaport, Lien Chieu Seaport, and Lach Huyen International Gateway Port. Vietnam National Administration of Tourism (VNAT) has recently expressed the urgency to upgrade its cruise port facilities to end the practice of ships berthing at unattractive container ports in order to compete with other cruise destinations in Asia. Below are some of the major ports in Vietnam:
Major Ports in Vietnam 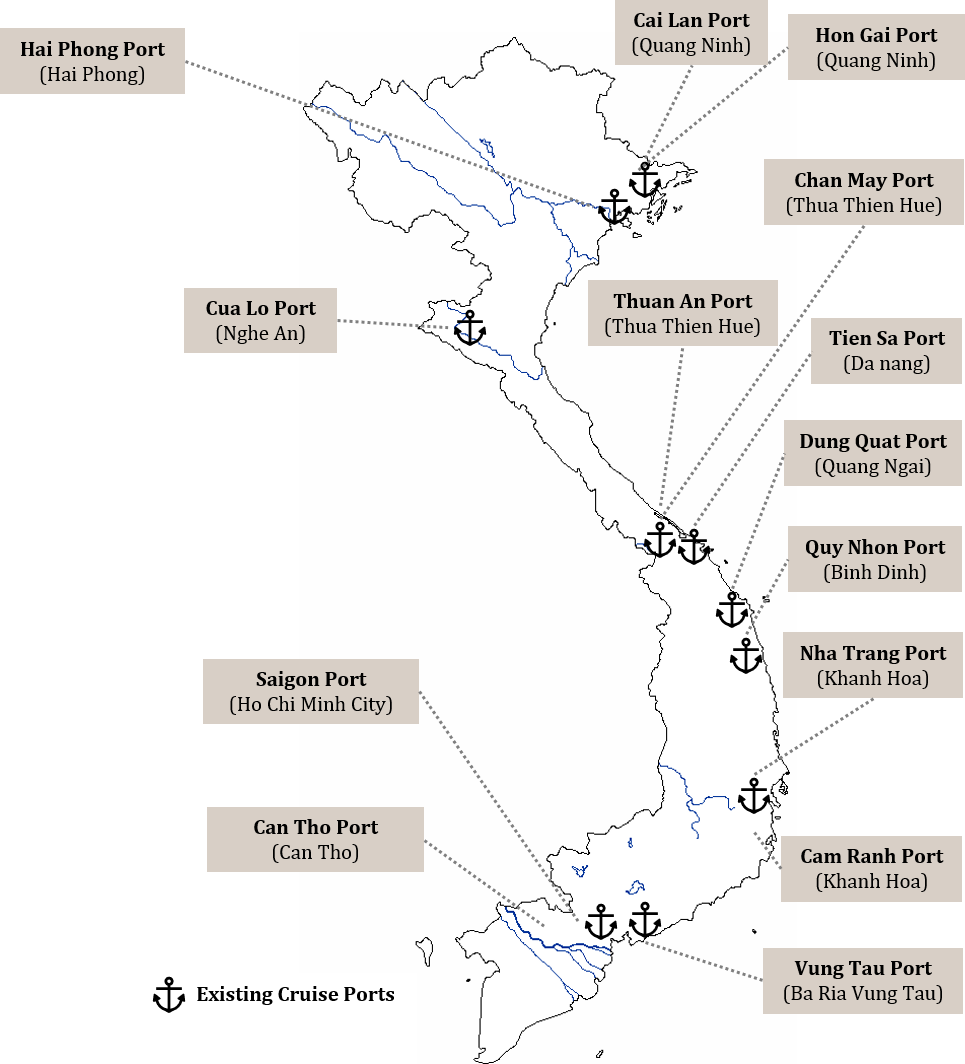 Vietnam, characterized by its coastlines and diverse terrains, attracted 15.5 million international tourists and 80 million domestic tourists in 2018. IVA and tourism receipts (TR) increased by 19.9% and 21.4% respectively, mainly attributed to large-scale promotion efforts by tourism authorities, an increase in flight connectivity and travel demand. In early December 2018, a plan has been approved to restructure Vietnam's tourism industry into a spearhead economic sector. The plan involves an effort to create a digital database of tour guides, travel agencies, lodging providers nationwide, as well as tourist destinations and tourists by 2020. From 2020, Vietnam International Tourism Fair will be held in April annually, in either Hanoi or Ho Chi Minh City to showcase Vietnam’s destinations. 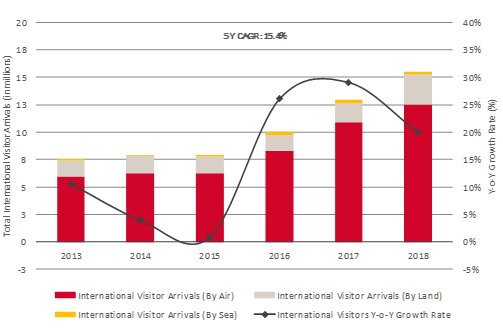 Vietnam’s top five international source markets in 2018 remained similar to 2017. The top five source markets made up 68.9% of all IVA in 2018, with China (32.0%) as the largest in-bound market, followed by South Korea (22.5%), Japan (5.3%), Taiwan (4.6%), and USA (4.4%). Boosted by increased flight connectivity, South Korea has showcased robust performance with the highest growth rate of 44.3% in 2018. As a result, tourist arrivals from the top five source markets increased by 26.4% y-o-y. Among the top 5 source markets, China and Taiwan have also registered strong growth of 23.9% and 15.9% respectively. Visitors from Hong Kong registered a record high in y-o-y growth of 30.4% in 2018. An increasing number of direct flights between Vietnam to major Chinese cities is expected to continue to spur travel demand.
Figure 3: Top Five Source Markets 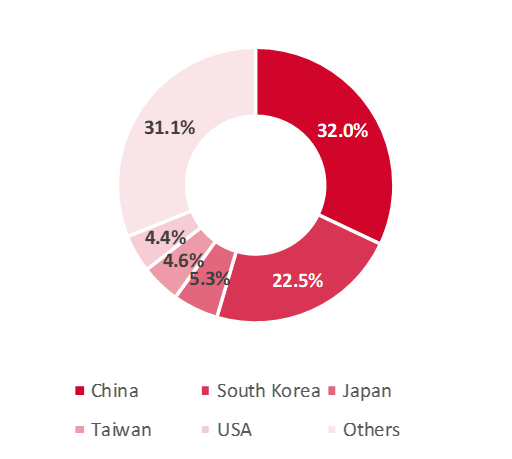 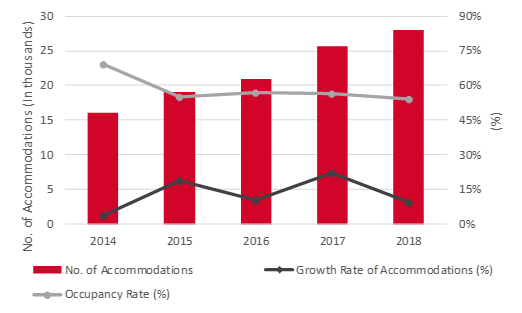 In Vietnam, hotel rooms are divided into two categories: classified and non-classified. The classified hotels will be rated between 1- and 3-star by respective tourism authorities in each province while 4- and 5-star will be rated by VNAT.

While non-rated hotel rooms still dominate the existing supply throughout the provinces, there have been a concerted effort from tourism authorities to attract international hotel brands. Furthermore, there have also been an increasing interest from these hotel operators in Vietnam’s growing market. 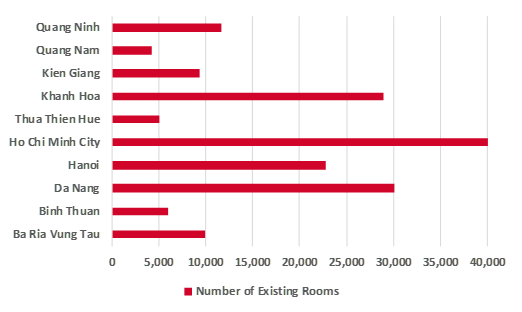 HVS tracks that the future hotel supply in Vietnam is expected to grow significantly by 125 hotels with approximately 44,880 rooms for the next five years.

This is mainly led by the ten leading provinces as analysed in this report. The future hotel supply in these provinces will increase by approximately 40,686 rooms distributed amongst 107 hotels.

With an anticipated CAGR of 10.0% from 2018 to 2023, the upscale segment shows the highest upcoming room supply with approximately 22,250 rooms in Vietnam.  However, looking at absolute numbers however, the midscale segment will continue to be dominant. 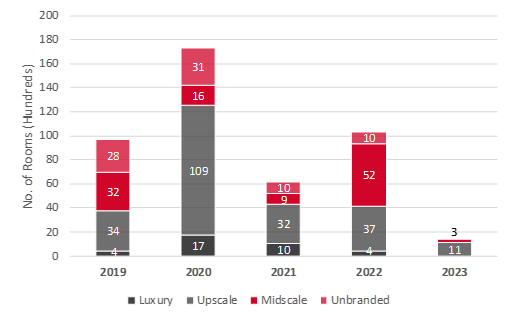 Figure 7 highlights the strong increase in room supply in Vietnam’s leading provinces. Ba Ria Vung Tau province registered the highest five-year CAGR of 11.6% from 2018 to 2023 while Khanh Hoa province reflected the highest absolute number of additional rooms (9,071) with a CAGR of 5.6%.

Branded hotel supply represents 80.7% of the total new room supply, with majority being in the  upscale and upper upscale segments. An increasing number of branded hotel operators such as Absolute Hotel Services, AccorHotels, Hilton Worldwide and Marriott Worldwide in particular, are gearing up for the rise in travel demand. The table below depicts the five-year CAGR of hotel room supply for each provinces:
Figure 7: Future Hotel Supply – Ten Leading Provinces (2019-2023) 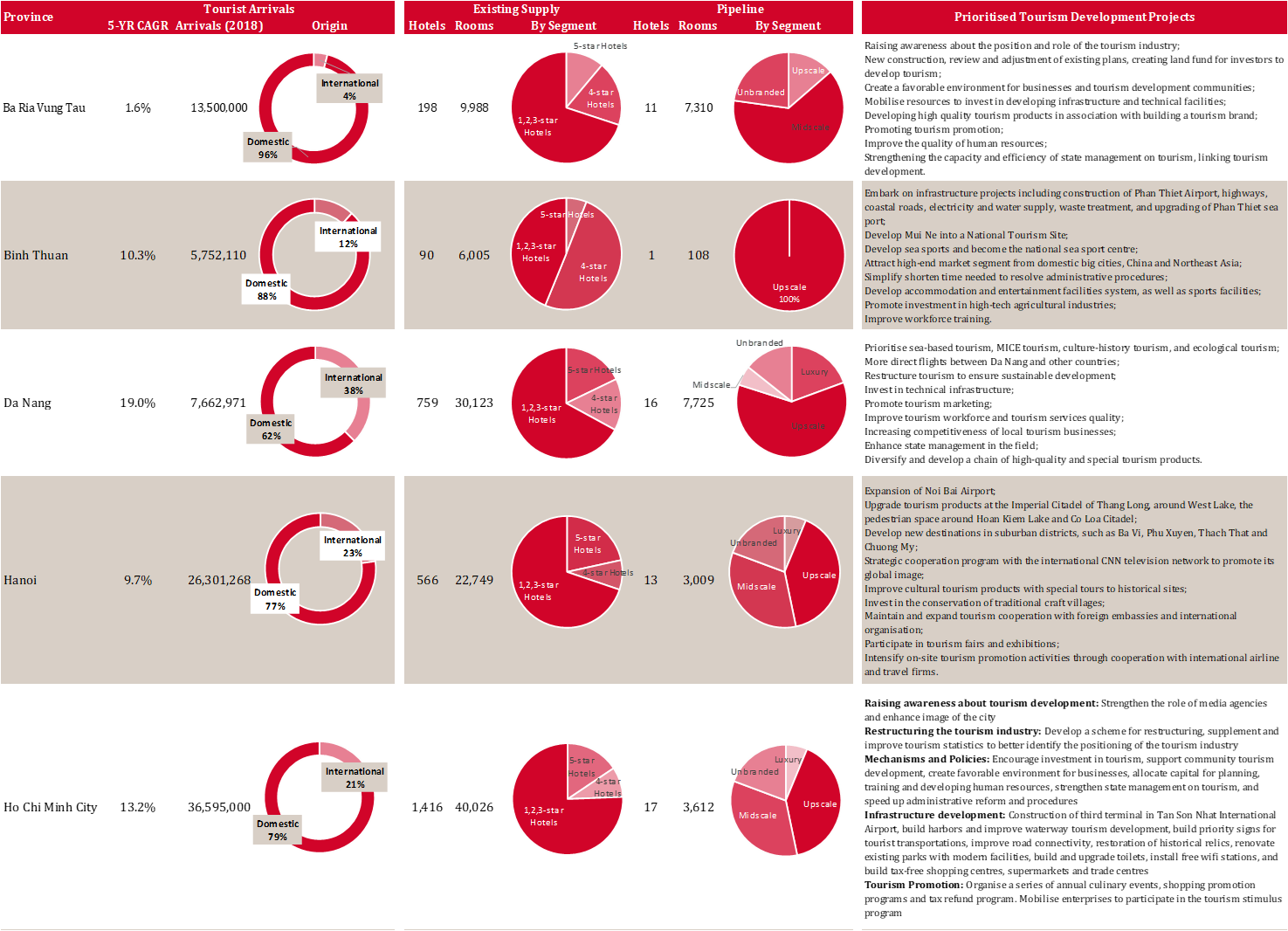 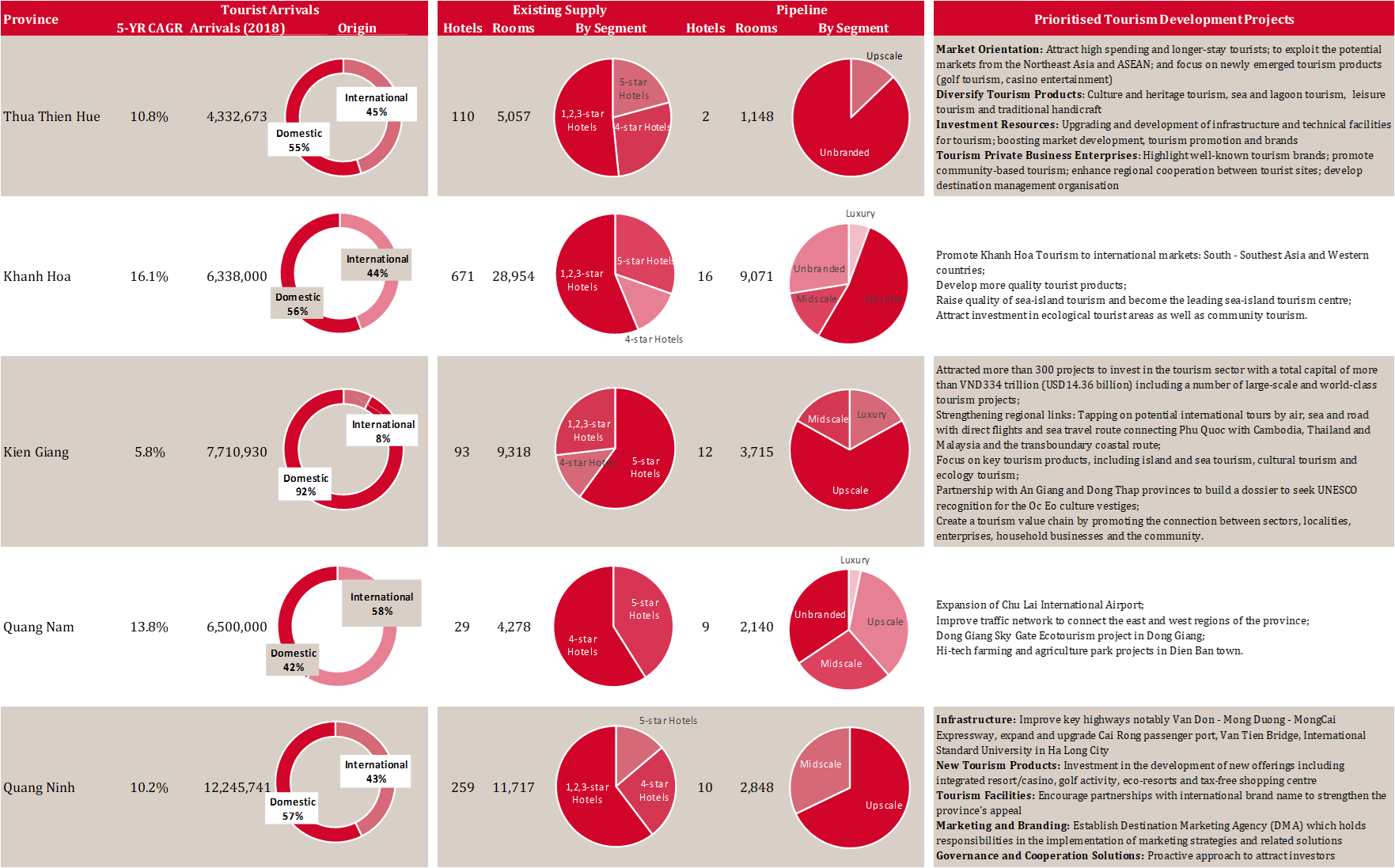 Transactions in Year-To-Date (YTD) September were: While new hotel developments are on the rise with increasing interest from investors in the market, hotel transactions in Vietnam remained limited in 2018. This is due to the scarcity of hotel supply and the unwillingness of owners to dispose properties. Over the past five years, hotel transactions have been fairly distributed among domestic and foreign buyers. Strong economic growth, expanding middle class, rapid urbanisation and growth as a tourism destination are some of the factors that have fuelled the appetites of foreign investors from Malaysia, Japan, Singapore, South Korea and Thailand. 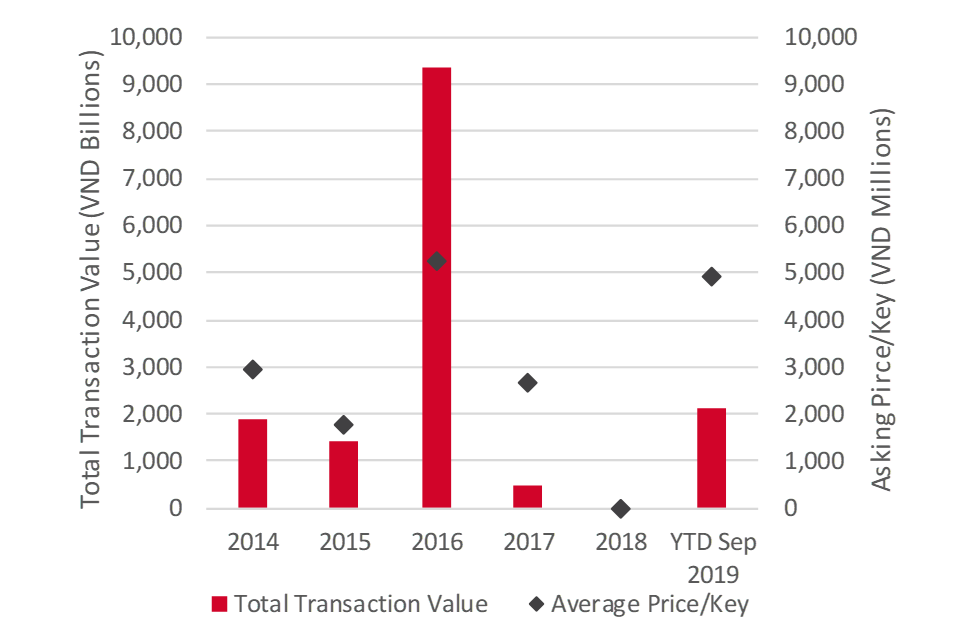 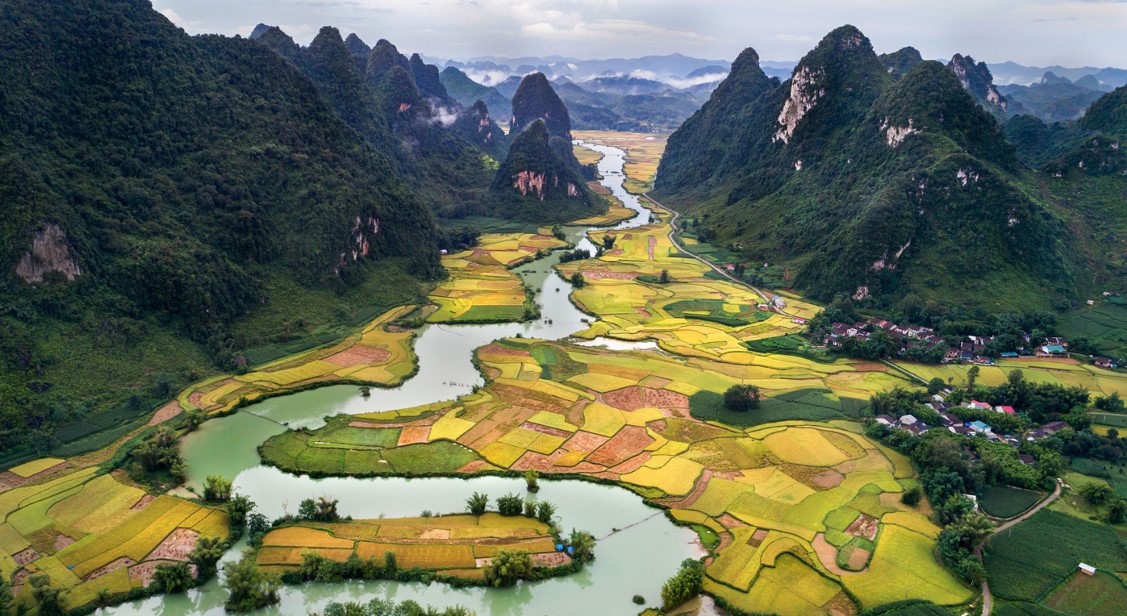 To drive the tourism sector, the government has approved the establishment of a VND300 billion (USD12.9 million) tourism development fund for promotional activities, national strategy and development planning.

In addition to funding activities, the government has also relaxed visa policies by extending their existing policy of allowing visitors from 46 countries to enter Vietnam for 30 days with a single-entry electronic visa until 2021.

Overall, growth in international visitors is expected to continue in the midst of rapid progression and transformation.

Development of Vietnam's tourism through 2020, with a vision toward 2030

Chariss Kok Xin is a Manager with HVS Singapore. She graduated from Glion Institute of Higher Education with a Bachelor of Arts in Hospitality Real Estate Finance and Revenue Management. Since joining, she has been engaged in numerous market research, feasibility studies and valuations in the Asia Pacific region that include Australia, Indonesia, Malaysia, Maldives, Papua New Guinea, Philippines, Seychelles, Singapore and Vietnam. For further information, please contact: [email protected] 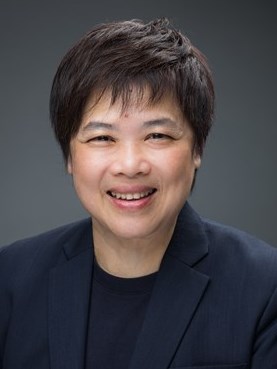