HVS: Impact of COVID-19 in Italy

This article describes the restrictions put in place in Italy following the COVID-19 pandemic with particular attention to their possible economic impact on the tourism industry, historically characterized by the high presence of international tourism. A specific analysis is dedicated to the main four city hubs in an effort to evaluate how their different reliance on leisure international visitation might shape their recovery once the pandemic subsides. 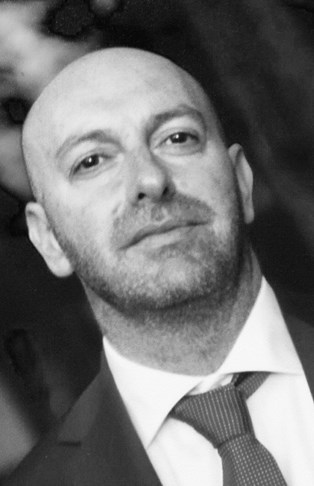 After the initial actions taken during February 2020 to contain the expansion of COVID-19, which provided limitations and restrictions only to certain activities and areas of the country (closing direct flights with China, prohibition of big gatherings and sport events, creation of red zones at Province and Regional level in North Italy), the Italian Government issued a Law Decree on 11 March providing for a shutdown of many activities and several limitations to other activities across the entire Italian territory. The shutdown – initially expiring on 3 April – has been extended until 3 May 2020. Activities actually permitted are essentially the ones considered for basic necessity (agriculture, food production and distribution, health care, pharmacy, plus few other activities strictly connected with these).

Discussions are ongoing about a phased reopening, after 3 May, with a selective and granular approach at regional level and based on type of business, areas, and safety measures put in place by each company. Preliminary guidelines indicate that factories and building sites will be the first to reopen, initially people will be allowed to move only around their own regions and for limited reasons; various types of retail shops, personal services, bar and restaurants should reopen between 18 May and 1 June; schools will restart classes in September. Social distancing measures will remain effective for months.

Because the capacity of testing and tracking people massively are considered pre-requisites for a prudent reopening (together with social distancing and full availability of safety tools), it appears unlikely that Italy will reach a very high level of economic reactivation during May. The possibility of economic rebound in the immediately-following months also remains questionable for some sectors and activities, as they are expected to keep long term limitations until a full solution of the sanitary emergency is found. Within this scenario, the IMF has reviewed the forecast of Italian GDP growth to –9.1% for 2020, the worst expected performance after the World War II, with a projected recovery of +4%/5% in 2021. Recent forecast by the Italian Government for the first 6 months 2020 indicates a possible drop of GDP by 15%.

The tourism sector appears among the ones paying the highest toll of the sanitary emergency and the ongoing economic downturn associated with the measures taken at national and international level.

Tourism represents roughly 13% of the Italian gross domestic product and with approximately 128 million total tourist arrivals and 429 million overnights in 2018, Italy is one of the main European destinations worldwide. While this number represents visitation at all types of tourist accommodation facilities, 75% of all arrivals refers specifically to hotel accommodation. International and domestic arrivals are almost equally split, although over the last ten years there has been a significant growth of the international share. More than 50% of the demand is directed to coastal areas and, predominantly, it is the leisure demand that supports the Italian tourism, while the trend shows that business arrivals are experiencing some turbulence in the last few years with a share of about 15% on total overnights. Finally, about 60% of international arrivals come from mainland Europe.

Italians’ outbound travel (2019) is measured at about 24.3 million trips (representing about 34% of total trips of Italian residents) with an average stay of over 5.7 days, potentially generating 138 million overnights.

Under the “COVID-19 restrictions” at country level, hotels and other accommodation facilities are allowed to operate (except for the region of Lombardy), but there are so many limitations and restrictions in place regarding the business itself and the behaviour of clientele that it does not make any sense to keep operating (for example: stop to all public and private events and to all restaurant and bar activities, including those within hotels; restrictions for travel to and from Italy; restrictions to leave place of residence for Italians, etc). It is estimated that more than 95% of the hotels are now closed and the only exception is represented by hotels hosting certain categories or activities such as doctors/sanitary staff, staff serving at the same hotel, crew members, and hotels temporarily used as health centres. Considering all these facts, there is not yet clarity about when and how the tourist business will come back to some kind of normalcy at a national level.

What will be the magnitude of the COVID-19 impact?

According to a preliminary estimate made by Confturismo-Confcommercio (Tourism and Commerce Association) for the period 1 March and 31 May, there will be a cumulative loss of between 30-45 million tourists in the accommodation facilities across Italy, translating to more than 8-10% of total annual overnights or €7.4 billion less revenue for the sector. The same institution, under the scenario that the emergency could last until the end of September 2020, projected a cumulative revenue loss for catering, transportation, and accommodation services at around €40 billion, out of which €22.5 billion representing transportation and accommodation (i.e. a reduction of 23% in the direct contribution of the sector to the national GDP). Other sources forecast an even higher impact of the crisis on the sector.

What is the outlook and recovery perspectives for hotels in the main Italian cities?

Assuming that international travel and visitation will be affected for a longer period by measures taken to face the emergency, the cities that should react faster to the crisis are supposed to be the ones relying more on internal demand and a more balanced mix between business and leisure travel. At the same time, the level of growth shown in the past could also represent a sign of dynamism and capacity of the local system to recover and penetrate the target markets.

The following graphs illustrate a comparative analysis over a decade of historical hotel overnights across the main Italian tourist city hubs, their share of international clients, and their RevPAR growth.
Hotel Overnights (000s) 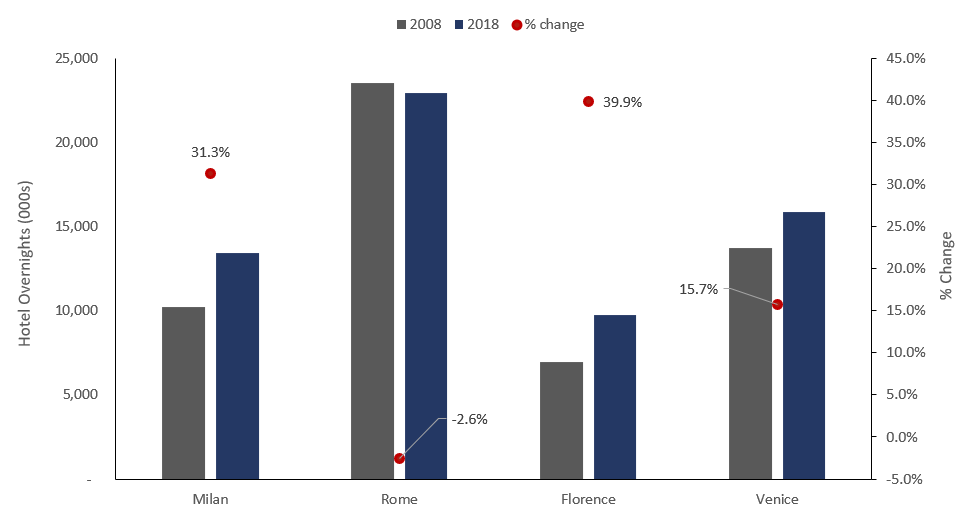 Source: AICA – Italian Association Confindustria Hotels: representative sample
Milan approached 2020, prior to the COVID-19 period, with a great dynamism following an exceptional 2019, with provisional data about international overnights indicating a 9.2% increase over 2018 and a pipeline of 18 new hotels. Milan successfully used the EXPO 2015 to boost its image as a business and cultural hub, with actual level of demand having already reached that of the EXPO-year record level and continuing to grow. Over the analyzed period, Milan showed growth of overnights at hotels of more than 30%; the international share increased at a much faster pace, with domestic visitation currently representing roughly 39%. RevPAR has shown a compound annual growth rate (CAGR) of 5.8%, mainly driven by average room rate increases. Milan is also the city with the highest level of business component amongst the four Italian hubs indicated.

Rome is by far the most visited Italian city, being one of the most important cultural, religious, and tourist destination in the world. Although Rome had a relatively-positive 2019 (based on provisional data) in terms of tourism flows and, in general recorded an aggregate demand for all types of accommodation facilities that grew by 20% over the analyzed period, the historical trend of the hotels shows a relatively steady level of demand, in part due to the strong expansion and competition by non-hotels and alternative lodging facilities mainly composed of private apartments rented through online platforms of the ‘so-called’ shared economy. The analyzed period shows a decrease of the international demand component across hotels with a shift to local demand which now accounts for 31%. RevPAR has shown a positive CAGR of 3.3%, mainly driven by average room rate increases.

Florence and Venice have seen an increase in hotel demand over the last 10 years of +40% and +16%, respectively. Florence witnessed improvements in both national and international demand, while Venice experienced growth mainly in international demand. The international share of demand is 73% for Florence and 77% for Venice. RevPAR growth for Florence recorded an outstanding CAGR of 7.7% mainly driven by increases in average room rate, while RevPAR for Venice registered a CAGR of 3.9%, driven exclusively by average room rate growth.

What could the possible order of recovery be?

The factors affecting the competitive scenario are:
Whatever the short- to long-term scenario outcome will be, it is likely that some of the currently-closed hotels may never reopen, either because of the bankruptcy of their owners or through an alternative use being preferred. The time taken for closed hotels to reopen will also need to be factored into the recovery of each city’s hotel market. Most likely the hotels mid-scale and economy will be more resilient, driven by factors such as domestic travel, local demand and accessibility, weekend, and lower-tier base.

Ezio Poinelli is Senior Director of HVS Southern Europe, head of HVS office in Milan and supervising HVS activities in Italy and Spain. He has 25 years experience in Hospitality, Real Estate, and Leisure Real Estate markets in Europe, Caribbean, Latin America and South Africa. He joined HVS in 2010 having significant experience in executive positions at Northcourse Advisory Services (Wyndham Worldwide), Ernst & Young, and other companies in the hospitality and real estate field. He is a graduate in Economics and Business Administration and holds a M.Sc. in Tourism Economics from Bocconi University. Please contact Ezio at +39 02 8734-3016 | +39 338 785-5144 or [email protected].

This article describes the restrictions put in place in Italy following the COVID-19 pandemic with particular attention to their possible economic impact on the tourism industry, historically characterized by the high presence of international tourism. A specific analysis is dedicated to the main four city hubs in an effort to evaluate how their different reliance on leisure international visitation might shape their recovery once the pandemic subsides. %%ViewCount%% Views Comments
Share:
Subscribe To Newsletter