The hotel industry in New Orleans has struggled to regain its footing in the years since Hurricane Katrina, but new data suggest a recovery is underway.

The blown-out windows along the façade of New Orleans’ Hyatt Regency hotel were one of the unforgettable stamps of Hurricane Katrina’s descent on the city in 2005. Nearly 200 of the city’s hotels were shuttered in the wake of the storm. Biotechnology, conventions, tourism, lodging and other fixtures of the New Orleans economy mounted a modest recovery over the next few years, only to be knocked back with successive blows, first from the national recession in 2008/09, next by the Deepwater Horizon oil spill in 2010. It’s fair to say the trials of the past half-decade have left some doubt about the viability of the city’s hotel industry over the long haul. But new developments and positive recent economic signs encourage a fresh look.

Following the devastation wreaked by Katrina, much of New Orleans’ economic infrastructure needed to be rebuilt, literally from the ground up. Private and public investment in recovery construction and new development helped keep unemployment in the market well below the national average through the recession.

As a result of this run of new development, biomedical research and medical care facilities are poised to be pistons of the city’s economic engine. Four new projects are located in the city’s Biomedical Corridor, adjacent to the CBD. Louisiana State University’s new University Medical Center (UMC) broke ground in April of 2011. The $1-billion center will include a 424-bed teaching hospital and is scheduled for completion in 2015. A new VA hospital—the country’s first in 20 years—is expected to include 200 beds and bring 17,000 new jobs to New Orleans when completed in 2014. Work on the Louisiana Cancer Research Center is also underway, with an expected opening date later this year. Finally, the $46-million, LEED Gold-certified New Orleans Bioinnovation Center, which opened in September of 2011, offers state-of-the-art laboratory, office, and conference facilities that help put New Orleans on the cutting edge of biomedical research; the center is anticipated to bring some 10,000 jobs to the city.

Office space and office occupancy rates help indicate the potential for local businesses to create hotel demand. Office vacancy rates in New Orleans have seen a slight rise over the past three years, but the balance is set to shift. The table below shows office occupancy in the city from 2007 through 2010.

In September of last year, Ochsner Health System announced plans to lease 80,000 square feet and bring up to 1,000 workers to Benson Tower, putting the building at over 90% occupancy. The former Hibernia Bank building is also under renovation to become a mixed-use complex of residential, retail, and office space. The Plaza Tower, a fixture of New Orleans’ downtown skyline that has been vacant since Katrina, sold at auction in December of 2011; Plaza Tower Development plans to transform the building into a mix of offices, condos, and shops. In June, the city is scheduled to complete a $34.5-million extension of the Canal Street streetcar line along Loyola Boulevard adjacent to the Plaza Tower, which is expected to spur further growth along the corridor.

Other developments include the $300-million expansion of the National World War II Museum, to be completed in 2015; a $30.5-million HUD grant to redevelop the Iberville Housing Project and an adjacent portion of the Canal Street retail corridor; and the renovation and recent re-opening of the Joy Theater.

Meeting and group demand continues to support local hotels. The Ernest N. Morial Convention Center underwent a $60-million renovation following Katrina and has exceeded pre-Katrina booking levels each year since 2007. The convention center is now the sixth-largest in the nation with 1.1 million square feet of contiguous space. In December of 2011, construction began on a $50-million renovation project that will reconfigure the convention center’s Hall A into an 86,000-square-foot function space, to be renamed the “Great Hall.”

Following the crater caused by Katrina, tourism demand stabilized from 2007 to 2009. The following table details tourism statistics, including dollars spent, from 2003-2010. 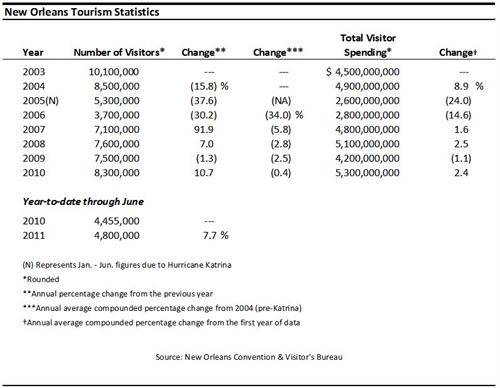 Full-year tourism numbers for 2011, though not yet available, are expected to better those of 2004; a positive sign of the area’s recovery.

Growth in convention and tourism demand has driven occupancy and overall performance among the market’s hotels. The graph below illustrates the tight correlation between occupancy and RevPAR between 2004 and 2010. 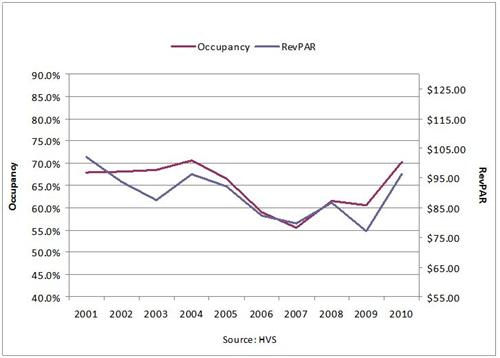 A swath of hotel closings and the temporary influx of relief workers to remaining hotels kept occupancies high through the end of 2005, though the trailing off of that recovery work led to a significant occupancy drop in 2006/07. As a result, RevPAR fell across the market through the end of 2009. On a positive note, the recession’s negative effects appear to be abating, as illustrated in the table below, which details a ten-year performance history of a select set of full- and select-service hotels in the New Orleans-Metairie-Kenner MSA. 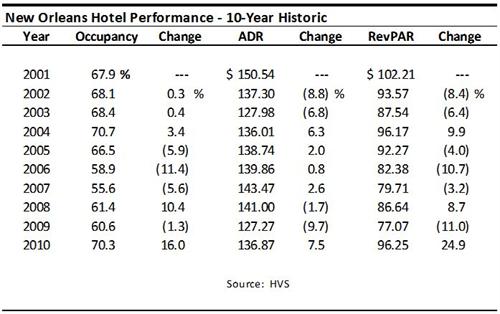 While the Deepwater Horizon oil spill hurt tourism, local hoteliers report that the cleanup efforts actually boosted performance in 2010 and aided in the market’s recovery from the recession. Furthermore, performance remained strong in 2011, after the cleanup crews had gone. Occupancy in the market has now reached levels seen prior to Katrina, and—for the first time since 2004—RevPAR growth is again being driven by a powerful rise in average rates. This is a promising sign of performance growth for New Orleans hotels and has opened the door to new builds and redevelopments.

Renovations and hotel re-openings include the Sheraton, Marriott, Hilton Riverside, Ritz-Carlton, InterContinental, and Loews. The Hyatt Regency, closed since Katrina, reopened last October following a $275-million renovation that overhauled its 1193 rooms and added a 50,000-square-foot exhibition hall for in-house conventions; the hotel sits squarely in the city’s Sports & Entertainment District, which includes the Superdome and the $13.5-million Champions Square.

The HVS 2011 U.S. Hotel Valuation Index forecasts significant growth in New Orleans’ hotel values through 2015, which would be a welcome change from the wavering real estate values since Katrina hit in 2005. Funds from the private and public sectors have been hard at work bringing the city’s economy and hotel industry back from the brink over the past six years, and recent employment, visitation, occupancy, and average rate statistics bear signs that this work has not been in vain. Given a hoist from the recovering national economy, hopes are high that New Orleans’ commercial, tourism, convention, and hotel segments will remain on the ascent.

The hotel industry in New Orleans has struggled to regain its footing in the years since Hurricane Katrina, but new data suggest a recovery is underway. %%ViewCount%% Views 1 Comments
Share:
Subscribe To Newsletter