Shipping and manufacturing have been the backbone of Chattanooga’s economy for more than a century. New investments in leisure attractions and commercial facilities are encouraging even more guests to pass through, bringing business to local hotels.

Chattanooga, Tennessee serves as a channel for transit in the American South. Major water, highway, and rail routes combine to make Chattanooga a crucial shipping and distribution hub. The city also has an up-and-coming, cutting-edge technology sector and has attracted large investments and infrastructure from companies such as Amazon.com and Volkswagen. All this transit of goods, services, and visitors has helped support the Chattanooga hotel market through the trying times of the past four years.

Wholesale trade and services are among the sectors that generate a significant number of hotel guests throughout the year; furthermore, these guests do not tend to be rate-sensitive, and their presence in the market has helped the recovery of rate losses incurred during the recent recession.

Hotels and restaurants—otherwise known as “Accommodation and Food Services”—represented nearly 8% of the total job force in Hamilton County in 2010. Moreover, these sectors have seen steady job growth for the past 20 years; growth of 2.1 percent vastly outpaced overall employment growth in Hamilton County, reflecting the strength of the local hotel and restaurant sectors.

The following table lists the top ten employers in Chattanooga as of 2011. 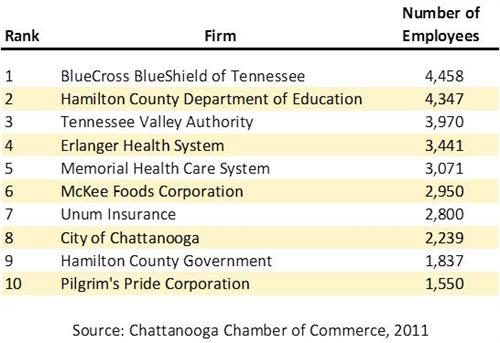 BlueCross BlueShield of Tennessee, which has its headquarters in Chattanooga, does billions of dollars of business and charity work statewide. Unum, a Fortune 500 company, is also headquartered in Chattanooga, and SIAG Aerisyn LLC operates a manufacturing plant in the market that produces up to 1,600 steel towers every year.

Unemployment in Hamilton County has been well below that of the MSA, state, and nation since the recession took hold in late 2007. The market did lose nearly 21,000 jobs during the worst of the recession (2008/09), but gained more than one-third of those back in 2011. Major forces behind the wave of new hires include Volkswagen, whose new Chattanooga production plant is poised to produce up to 150,000 Passats a year, and Amazon.com, whose newly created distribution facilities in Chattanooga and nearby Bradley County have been up and running since last year and are already scheduled for expansion. Volkswagen alone is expected to generate more than $1 billion in direct investments and up to $12 billion through related automotive operations in the area. According to the Chattanooga Chamber of Commerce, new businesses and expansions added nearly 800 jobs to the market last year, leading Kiplinger to name Chattanooga one of America’s “comeback cities” in 2011.

On a somewhat less encouraging note, Chattanooga’s office vacancy rate increased from late 2010 to early 2011, while rental rates declined; this demonstrates downward pressures in the market as of the first quarter of last year, though market participants report that economic conditions have been steadily improving.

Major attractions in Chattanooga include the Tennessee Aquarium, which also features a butterfly garden and penguin habitat; the Chattanooga Choo Choo complex; and Finley Stadium/Davenport Field, which hosts the University of Tennessee football team year-round and the annual NCAA Division I-AA National Football Championship game. These and other attractions like the Chattanooga Zoo and Ruby Falls draw more than three million tourists to the city each year.

Public and private partnerships have helped fund new parks, add public art, and revitalize historic buildings through the $120-million 21st Century Waterfront Project, which was completed in 2005. Other features of Chattanooga’s revitalized downtown include the $30-million expansion of the Tennessee Aquarium, the $19.5-million expansion of the Hunter Museum of American Art, and the $3-million redesign of the Creative Discovery Museum. The Tennessee Riverfront area was also transformed with a pedestrian pier, boat slips, and waterfront parks and restaurants. These efforts all helped inspire Livability.com to name Chattanooga one of the top-ten most livable downtowns in the U.S.

The Chattanooga Convention Center underwent an expansion in 2004 and now offers 312,000 square feet (including 100,000 square feet of open exhibit space), 21 meeting rooms, and six ballrooms. According to the Chamber of Commerce, the center generated $22.5 million in lodging, food and beverage, and other revenues for fiscal 2010/11, a $4-million increase from the year before.

Chattanooga’s hotel industry has enjoyed something of a boom since the Great Recession. Market-wide occupancy dipped in 2008 and 2009, but rebounded nicely in 2010 and continued to rise in 2011. The recession hardly put a dent in the market’s average rate, which lost only a few dollars and gained almost all of that back in 2011. Strong demand levels have supported the relative stability of hotel performance in the market, with the aforementioned commercial and leisure demand generators continuing to deliver new guests to area hotels.

Strong performance has also supported a batch of new hotel openings over the past several years. The following table lists recently opened and ongoing hotel developments in Chattanooga.

Major investments from international corporations signal confidence in Chattanooga’s long-term economic prospects; recent openings and the return of strong occupancy and average rates to area hotels speak to the hotel market’s resiliency. Its businesses and attractions, as well as its location at the crossroads of three states, make Chattanooga a waypoint for travelers across the South. Hopefully, the steam generated by the national economic engine will help drive more business to Chattanooga in 2012 and beyond.

Shipping and manufacturing have been the backbone of Chattanooga’s economy for more than a century. New investments in leisure attractions and commercial facilities are encouraging even more guests to pass through, bringing business to local hotels. %%ViewCount%% Views Comments
Share:
Subscribe To Newsletter