Seattle, WA is known worldwide for its reputation as a coffee & music haven, as well as extraordinary attractions including the Space Needle and Pike Place Market. This article shows trends in hotel supply, demand, & performance within the city.

Known worldwide for its reputation as a coffee and music haven, as well as extraordinary attractions like the Space Needle and Pike Place Market, Seattle also boasts a high quality of life, a highly educated workforce, a variety of outdoor activities, and a strong economic base that includes high-tech, clean-tech, bio-tech, manufacturing, telecommunications, and healthcare companies. These factors have created a favorable climate for hotels in Seattle and surrounding markets that should extend over the near term. 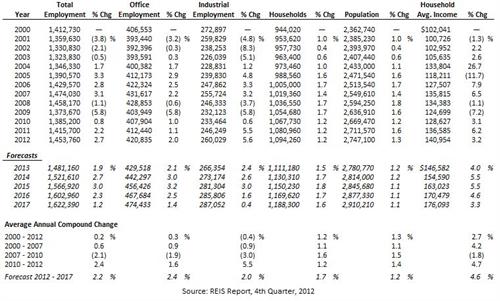 With the exceptions of the recent recession and the earlier dot.com bust, the Seattle market has realized gains in total employment annually during the historical period shown. Industrial employment has realized the largest declines and increases over the years, concurrent with the hiring and layoff cycles typical of the manufacturing and distribution industries. Households and the overall population of Seattle noted 1% to 2% growth from 2004 through 2012. Employment, household size, and population are forecast to grow modestly through 2017. Household average income is forecast to grow at rates that are more significant as higher-paying jobs in the technology industries are expected to grow.

The following table illustrates unemployment statistics for King County, the Seattle MSA, the state of Washington, and the U.S. from 2002 to 2011. 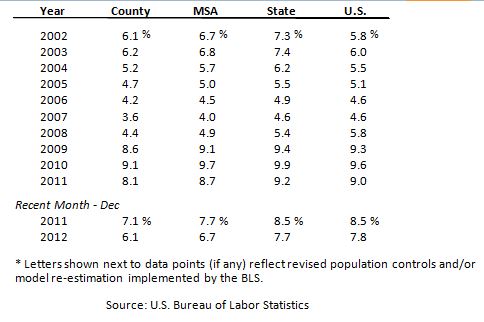 The Seattle market realized strong growth across a variety of industry segments following the end of the recent recession; this was particularly evident in the high-tech industry with the expansions of Amazon.com, Microsoft, Facebook, Google, and Twitter. Amazon.com has become a driving force in the market, with 582,000 square feet of new office space completed in 2011, 325,000 square feet completed in 2012, and a combined total of 3.1 million square feet in the pipeline. In addition, manufacturing has grown, in particular at Boeing, which has received a significant number of post-recession aircraft orders. There is some concern of Boeing’s long-term stability in the area given competition from Airbus, the potential for Boeing to expand operations to South Carolina, continued labor union issues, and potential defense spending cuts by the federal government. The grounding of all fifty 787 Dreamliner aircraft in early 2013 because of the risk for potential battery fires has also hurt perception of the company, which is working to address the issues and return the cutting-edge aircraft to operation; on April 19, 2013, the Federal Aviation Administration announced it had approved changes to the design of the Boeing 787's battery system, marking the first step toward returning the grounded aircraft to service.

As mentioned previously, the expansion of Amazon.com is a driving force in the market. In addition, Microsoft’s expansion efforts include a 313,800-square-foot facility currently underway in Redmond and an additional 233,700-square-foot building in the planning phase. With low vacancy rates in the submarkets of Central Seattle, Kirkland/Redmond, and Bellevue/Issaquah, it is expected that speculative development projects will become more prevalent across Seattle.

The following table illustrates a trend of office space statistics for the overall Seattle market. 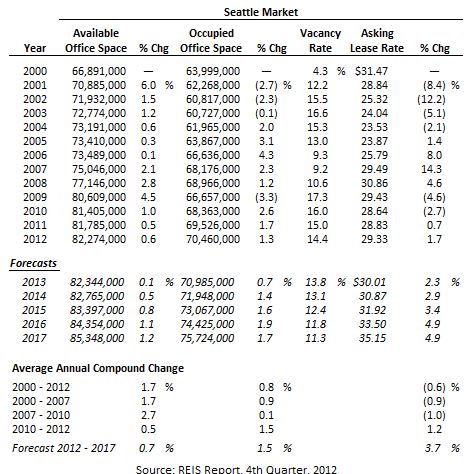 Although the closure of Washington Mutual, layoffs at Microsoft, and other events during the recent recession resulted in a significant increase in vacancy in 2009, other industries were not hit as hard, and overall vacancy never reached the 20% mark that many urban areas realized across the U.S. Healthcare, education, the Port of Seattle, and the Bill & Melinda Gates Foundation remained particularly strong during the downturn. Vacancy is expected to continue the decline that began in 2010, while the average lease rate should increase as the market strengthens.

Hotel Construction Update
Proposed hotels in the pipeline for Seattle include the following:

Many new hotel projects have been rumored for the greater Seattle market, including a 1,200-room, full-service hotel; however, given the stringent financial requirements to build a hotel in the present economic climate, the percentage increase to the overall market supply in Seattle should be minimal. New hotel projects in the Downtown market are expected to move forward as the economy gains strength. In addition, smaller limited- and select-service projects in the Puget Sound are anticipated to be built as lodging demand continues to improve and more private financing becomes available.

Outlook on Market Occupancy and Average Rate
Hotel demand is expected to grow as the economy continues to strengthen and area corporations continue to expand. Occupancy growth is anticipated, concurrent with growth in hotel demand; however, occupancy levels may be affected in markets receiving large amounts of new supply. Average rate is expected to realize significant gains as lodging demand continues to strengthen, and new high-quality supply should support further average rate growth, provided area hoteliers do not start to discount rates to retain occupancy—a practice widely adopted during the recent recession but less likely in the more stable economic climate of the present.

REVIEW OF HOTEL TRANSACTIONS
CLICK HERE FOR A LARGER VERSION 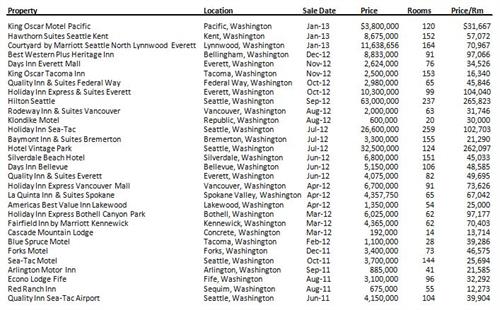 The most notable transactions in 2012 were the Hilton Seattle and the Hotel Vintage Park, which sold at a price per key of $265,823 and $262,097, respectively. The remaining sales in the market ranged from $104,040 down to $12,273 per key, with pricing highly dependent on historical performance and on the conditions of sale, including if the property was under financial distress.

Brokers’ Outlook
According to HVS interviews with brokers active in the market, limited-service hotel cap rates range between 7% and 10%, depending on a property’s performance history, with the rooms revenue multiplier (RRM) ranging from 2.5 to 4.5. Exposure time is anywhere from three to nine months, depending on the seller’s motivations. Brokers report that now is a good time to either hold or buy, with typical risks involved. These investment parameters hold for select-service hotels; however, exposure time for these properties is forecast to be shorter, noting only a two- or three-month window. Full-service hotels are noting much lower cap rates, ranging from 3.5% to 9%, depending on the quality and location of the property.

Conclusion
Overall, the Seattle market boasts sound lodging dynamics, and the continuing growth in the area’s employment is expected to spread its positive effects to the local hotel industry. The only major concern at this time is the amount of current and rumored hotel development, which could significantly affect occupancy, average rate, and RevPAR should a high number of rumored hotels come to fruition. Otherwise, the overall outlook for the Seattle market remains optimistic.

Seattle, WA is known worldwide for its reputation as a coffee & music haven, as well as extraordinary attractions including the Space Needle and Pike Place Market. This article shows trends in hotel supply, demand, & performance within the city. %%ViewCount%% Views Comments
Share:
Subscribe To Newsletter