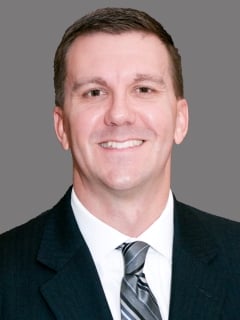 San Antonio’s illustrious past and cosmopolitan present have come to symbolize the rich heritage of the state. Visitors by the millions are drawn to the city's meandering San Antonio River Walk, the eighteenth-century Spanish missions, and the Alamo. The coexistence of the old and the new is one reason San Antonio is viewed as an attractive place to relocate or visit. The San Antonio area is part of the greater south-central Texas economic base, which proved resilient following the recent recession. San Antonio features a variety of industries and employers that represent a cross-section of hotel demand potential. Some are national in scope, while others operate on a more local basis; many are engaged in high-tech research and manufacturing, with others are active in education, healthcare, defense, and government. Together, these engines of San Antonio’s economy have proven strong demand generators for the city’s hotels. 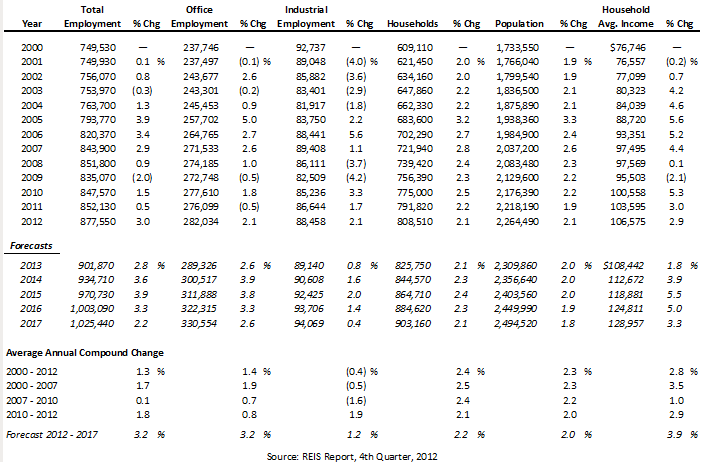 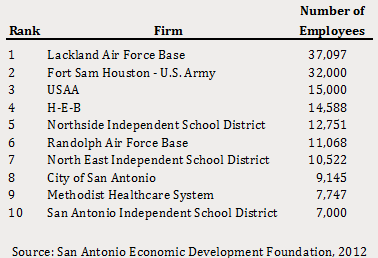 Military installations constitute several of San Antonio’s top employers. The recommendations in the most recent Base Realignment and Closure (BRAC) program call for the consolidation of a majority of the Defense Department medical training and research units in the U.S. to the San Antonio area. The relocation of these divisions and personnel will add several thousand military and civilian personnel to San Antonio and necessitate $2.2 billion in renovations and construction.

The following table summarizes unemployment data for Bexar County, the San Antonio-New Braunfels MSA, the state of Texas, and the U.S. from 2002 through 2011. 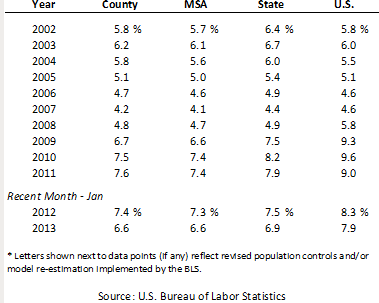 Unemployment in San Antonio began to rise slightly in 2008 as the region entered an economic slowdown; this trend continued in 2009 and 2010, concurrent with the worsening effects of the recession. After general stability in 2011, the most recent comparative period illustrates improvement, as shown in the latest data for 2013; moreover, the local unemployment rate remains below those of the state and nation. Reportedly, local employment has remained strong within the government and healthcare sectors, including strong employment levels at major employers such as the Department of Defense and Methodist Healthcare System. 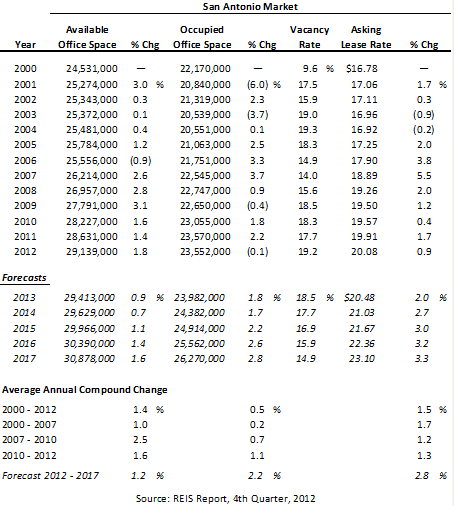 Hotel Construction Update
The construction pipeline in San Antonio is relatively small given the massive influx of new supply the market received from 2005 to 2010. The most prominent project underway is the Hotel Pearl, located at the Pearl Brewery just north of Downtown; Kimpton Hotels & Restaurants will manage the hotel, which is expected to open in the fall of 2014. A number of smaller hotels are in the pipeline throughout the metro area; however, the percentage increase to the overall market supply will be minimal.

Outlook on Market Occupancy and Average Rate
Trends in the local lodging market indicate that demand growth has been significant over the past several years. As a result, occupancy levels in 2012 reflected a significant increase over those recorded in 2011. Average rate growth also accelerated in late 2012 and into early 2013. This trend reflects the market’s movement in the hotel real estate cycle from recovery to expansion and growth.

Recent Hotel Transactions
The following table summarizes hotel transactions in the state of Texas since November of 2011. 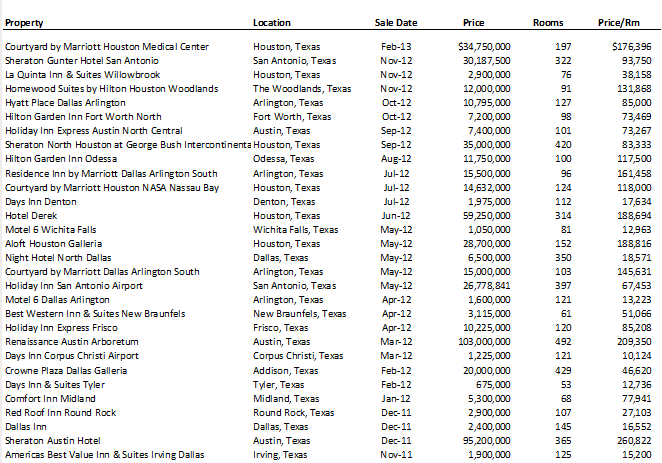 San Antonio’s hotel market has realized a steady pace of deals across a variety of market segments and acquisition opportunities. The sales represent acquisitions of stabilized assets by institutional investors, as well as repositioning opportunities for entrepreneurial owner operators. An increased pace of lodging asset trades is anticipated in 2013, spurred by strengthened market conditions, improved hotel performance, and recent asset renovations.

Conclusion
Having moved through a phase of recovery, San Antonio’s hotel industry is now poised for a period of steady growth. Increased demand has supported average rate growth for the San Antonio lodging market, and transactions and values continue to climb as local hoteliers regain pricing power. As access to capital and investment channels continues to broaden, investor interest in San Antonio-area upscale hotels is expected to remain strong, especially given recent performance trends and healthier metro-area economic fundamentals. Given the improvements in the national economy, the expansion of businesses in the city, and the promise of more tourism to area attractions, the outlook is optimistic for San Antonio hotel performance and development in the near term.

David Bone is a Director of Business Development with the HVS Austin office. David earned his bachelor's degree from Texas A&M University and has front-line hotel experience with Omni Hotels and Resorts. David works extensively in the south Texas region, with a particular focus on the greater San Antonio metro area. He is a state certified general appraiser. Contact David at (214) 629-0908 or [email protected].