Average rates in Charlotte have shot up since 2011 and are climbing higher in 2013, piquing interest among hoteliers, developers, and lenders. How have increased employment and demand generation further affected prospects for the city’s hotels?

With a widely acclaimed high quality of life and low cost of living, Charlotte, North Carolina ranks as one of the fastest-growing cities in the country. Charlotte also remains the second-largest financial center in the nation, and banking is still the city’s top industry despite the negative impacts brought on by the recent recession. The 264 Fortune 500 companies with a presence in Charlotte—six of which are headquartered in Mecklenburg County—harness the might of the city’s economy; these companies include Bank of America, Lowe’s, Domtar, Duke Energy, Nucor, Family Dollar, Sonic Automotive, and SPX. The 2012 Democratic National Convention brought national attention to Charlotte and was the largest event in the city’s history, with an economic impact of $163.6 million. With its solid pillars of commerce and finance, Charlotte is poised to continue its strong economic reign in the coming years. 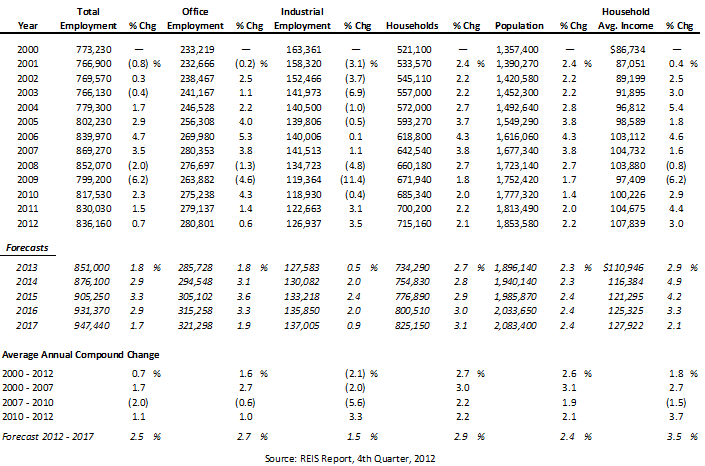 Similar to other areas of North Carolina, Charlotte reduced its dependence on the manufacturing industry in the early part of the last decade. The textile industry has been downsized statewide; the outsourcing of labor and production facilities to other countries and the high-tech mechanization of plants that require fewer workers have also led to a reduction in industrial employment. Despite this, Charlotte noted generally positive trends in total and office employment until the onset of the recession in 2008/09. The banking industry lost approximately 15,000 jobs over 18 months, which significantly affected the market. Other mainstays of Charlotte’s economy and the city’s allure as a tourism destination helped it weather the downturn, and both households and population have realized annual increases since 2001.

The following table illustrates unemployment statistics for Mecklenburg County, the MSA, the state of North Carolina, and the U.S. from 2002 through 2011. 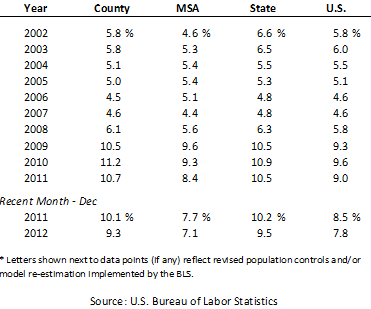 Although Charlotte’s unemployment rate is still higher than the national level, the city is poised to lead the state in job and income growth in 2013. Banking, energy, and healthcare are the primary industries in Charlotte. Wells Fargo's East Coast operations are centered in Charlotte, and Bank of America is headquartered in the city. In July of 2012, Duke Energy completed a $32-billion merger with Progress Energy, making Duke Energy the nation's largest regulated utility. CNN Money cited Charlotte as one of the five fastest-growing cities for tech jobs, with companies in this sector ramping up technical recruiting by 22% since March of 2012. Charlotte’s healthcare sector employs more than 78,000, making it the largest employment segment in Mecklenburg County; Carolinas HealthCare System, Charlotte's only teaching hospital, and Presbyterian Healthcare, one of the largest non-profit regional medical centers in the state, are two of the county's largest employers.

In addition, the Charlotte Douglas International Airport serves as a major economic engine for the area, generating more than $10 billion annually for the region’s economy. The airport realized nearly 540,000 takeoffs and landings in 2011, making it the sixth-busiest airport in the world; international travel through the airport reached an all-time high in 2012. Charlotte's economy is also bolstered by the presence of the University of North Carolina at Charlotte, NBA and NFL teams, and Lowe's Motor Speedway. As of March of 2013, more than 3,200 new jobs have been announced for the Charlotte area; these new jobs come from AREVA’s moving of its U.S. headquarters from Bethesda, Maryland to Charlotte; the expansion of Charlotte’s MetLife offices by 1,300 jobs; and Convergys’ addition of 1,600 jobs at its two Charlotte facilities.

Charlotte’s Uptown submarket has the largest available supply of square footage and realized a significant spike in demand in 2012. With limited availability and higher average asking rates in the popular and amenity-rich Uptown, Medical/Randolph, Midtown, SouthPark, and NC 51 submarkets, many potential tenants have opted for space in suburban submarkets. Driven Brands announced it will relocate to the Ally Center in Uptown in 2013, where it will occupy almost 27,000 square feet of office space. SunTrust also announced it will relocate two of its offices in 2014 to the new Sharon Square development in the SouthPark submarket.

The following table illustrates a trend of office space statistics for the overall Charlotte market. 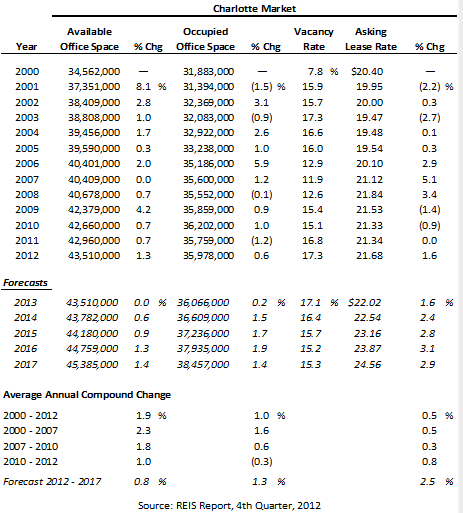 In 2012, Charlotte’s office market showed strong growth, reflecting that the market was in the midst of a full-scale recovery. Forecasts show an increase in available and occupied office space, with increases in average asking lease rate and positive absorption. Current construction includes the 105,500-square-foot Class A building in the SouthPark submarket, the first building start in SouthPark since the start of the recession.

Hotel Construction Update
According to HVS research, the following two hotels are under construction in Charlotte:

In addition, several hotels are in various planning stages, including an independent hotel near the new Charlotte Knights baseball field. While many new hotels are anticipated to enter the market in the coming years, the percentage increase to the overall market supply will be minimal. Furthermore, given expected increases in demand for Charlotte hotels, any new supply should be quickly absorbed.

Outlook on Market Occupancy and Average Rate
Charlotte was one of the best-performing lodging markets in the nation in 2012. Average daily rate increased almost ten percentage points over 2011. Regardless of tier, local brokers believe there is further potential for rate growth, with potential increases of up to another ten points in 2013. As the market continues to expand and little confirmed new room supply is expected, occupancy should continue to increase at area hotels. 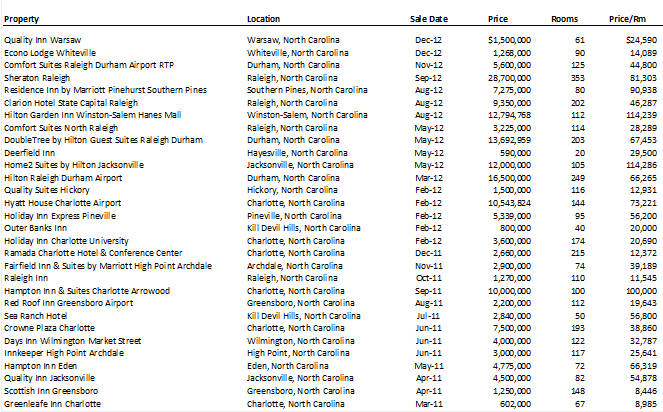 Brokers’ Outlook
Local brokers note that hotel transaction volume in the Charlotte area is likely to increase in 2013, and with average rate increases realized across all tiers, upside exists for both buyers and sellers. Most budget-oriented to midscale properties are trading near a room revenue multiplier (RRM) of 3.0. In addition, while interest rates have been low in recent years, finding a willing lender has been difficult for investors across the nation following the recession. That is not the case in Charlotte at this time, with numerous lenders reportedly looking to help make deals happen.

Conclusion
Charlotte is moving full-steam from the depths of the recession, with numerous expansions and corporate relocations helping bolster the city’s economy and hotel market. With hotel transaction volume expected to increase and an investment market warming to the prospects of financing new hotel projects in Charlotte, the city is poised for additional growth in the near term.

Average rates in Charlotte have shot up since 2011 and are climbing higher in 2013, piquing interest among hoteliers, developers, and lenders. How have increased employment and demand generation further affected prospects for the city’s hotels? %%ViewCount%% Views 3 Comments
Share:
Subscribe To Newsletter