Cincinnati’s workforce is set to return to pre-recessionary proportions by 2014, making the city’s economic recovery among the fastest in the Midwest. Cincinnati’s hotel industry has realized slower growth, though demand and ADR are trending upward.

A Midwestern hub for commerce, manufacturing, industry, and tourism, Cincinnati is regaining strength following the trying recessionary years. Ranked eighth in Forbes’ “Top 15 U.S. Cities’ Emerging Downtowns,” Cincinnati has sturdy economic drivers that have proven to pull their weight through tough times. The city’s lodging industry is realizing the benefit as the local and national economies improve and as Cincinnati’s businesses and attractions draw more visitors to local hotels.

Economy Update
Cincinnati is the third-largest city in Ohio and home to ten Fortune 500 headquarters. Several development initiatives are advancing the city’s reputation as a center for business and leisure. Multibillion-dollar redevelopment efforts have been at work in the city’s Downtown since the early 1990s, with projects including the Over-the-Rhine housing redevelopment, the construction of two stadiums (the Paul Brown Stadium and the Great American Ball Park), and The Banks riverfront development. Additionally, population growth is fueling business developments and dropping vacancy rates in the downtown area.

More than a century ago, Cincinnati’s location on the Ohio River, a major U.S. shipping channel, established the city as a center for manufacturing and industry. The recent recession hit Cincinnati hard, and the city’s manufacturing industry has yet to surpass pre-recessionary levels of employment. Nevertheless, no single Cincinnati business employs more than three percent of the city’s workforce, and this diversification of the market over the past two decades has helped Cincinnati weather harsher economic climates. 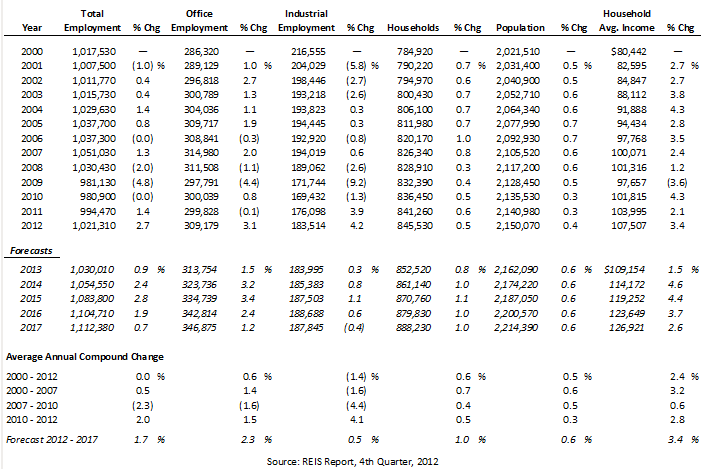 Total employment in Cincinnati fell in 2008 and 2009, as it did in many U.S. metro cities during the recession. Cincinnati, along with Columbus and Cleveland, emerged from the recession with relative vigor compared with surrounding markets in Ohio, Indiana, and Kentucky. Forecasts call for employment to return to pre-recessionary levels by 2014, largely based on the expansions of existing Cincinnati businesses and new businesses coming into the market.

The following table summarizes unemployment statistics for Hamilton County, the Cincinnati MSA, the state of Ohio, and the U.S. from 2002 through 2011.

While unemployment began to increase in 2008, concurrent with the onset of the recent recession, levels have fallen since 2011; the most recent comparative period shows unemployment well below the peaks of the last three years as of December 2012.

The Cincinnati office vacancy rate stabilized at 20.3% in both 2011 and 2012; this rate is forecast to fall to 16% by 2017. As of the fourth quarter of 2012, the Central Business District submarket registered one of the lowest vacancy rates in Cincinnati, bolstered by significant residential, retail, and office development in the downtown area. Contract renewals and company commitments should support further decreases in vacancy rates going forward.

The following table illustrates a trend of office space statistics for the overall Cincinnati market. 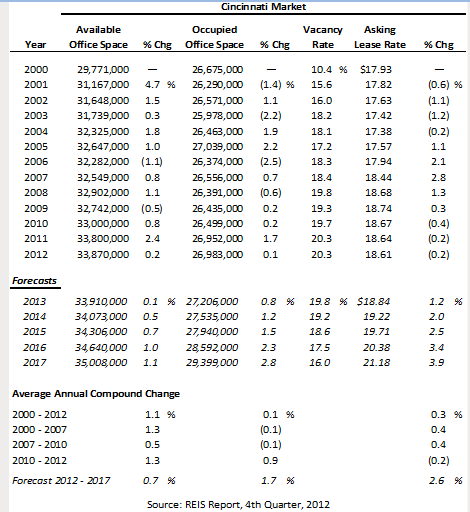 Leisure Sector
Leisure attractions, including sports venues, art galleries, and museums, as well as various weekend events, continue to bring visitors to the city’s hotels and restaurants. Paramount’s Kings Island, one of the largest amusement and water parks in the Midwest, received approximately 3.14 million visitors in 2012. Cincinnati is also home to three riverfront professional sports venues: the Great American Ball Park, home of the Cincinnati Reds; Paul Brown Stadium, home of the Cincinnati Bengals; and U.S. Bank Arena, home of The University of Cincinnati Bearcats basketball team. The City also invested in the $400-million, 354,000-square-foot Horseshoe Casino, which opened in March of 2013. Furthermore, Downtown Cincinnati offers the state-of-the-art Duke Energy Convention Center, located within a five-block radius of more than 3,000 hotel rooms, 200 shops, and 75 restaurants.

Hotel Construction Update
According to HVS research, the following new hotels are currently in the pipeline for Cincinnati:

The Cincinnati lodging market is growing at a steady rate. The Hyatt and many other Downtown hotels are undergoing extensive renovations aimed at regaining commercial clientele. Additionally, the historic office building that previously housed The Cincinnati Enquirer is being transformed into a 238-room hotel, a project that will also include 12,000 square feet of street-level retail outlets. The opening of the new Horseshoe Casino in March of 2013 is attracting thousands of new visitors and encouraging hotel developers. Officials from the City of Cincinnati’s Economic Development Division report that they fully expect to see more hotels built around this new Downtown attraction.

Occupancy and Average Rate Outlook
Compared with the hotel markets of Cleveland and Columbus, the Cincinnati lodging market has been slower to recover, despite Cincinnati’s relative lack of new supply. The market’s occupancy hit its low point in 2009 after a period of growth during the middle of the last decade. In 2012, occupancy for the entire city neared its previous peak; furthermore, occupancy has continued to trend upward in 2013. Average rate growth also lagged in Cincinnati, driven by deep discounting in the suburban areas, but CBD hoteliers have begun to push rates as demand trends continue to strengthen. Even with the new supply expected to come online over the next 12 to 24 months, HVS anticipates these upward trends to continue, with new high-end hotels commanding higher rates.

Conclusion
Cincinnati has been successfully marketed to both business and leisure travelers over the past several years. The results can be seen in the form of improving office and hotel occupancies, as well as new developments like the Horseshoe Casino and revitalization projects Downtown. As the local, regional, and national economies improve and these attractions and businesses continue to draw more visitors, local hotels stand to benefit. The impact of the proposed new hotel supply currently on the books should be minimal in terms of the effect on occupancy, and may have the ancillary effect of bumping average rates upward in some submarkets. Overall, the outlook for Cincinnati’s lodging industry is optimistic.

Stacey Nadolny, MAI, an HVS Managing Director, leads the firm’s consulting and valuation practice in Chicago. Chicago is one of over 30 cities across North America where HVS has experts living and working, providing insights and solutions to clients. In the Midwest, HVS leaders are located in St. Louis, Detroit, Minneapolis, Nashville, Cincinnati, and Omaha, in addition to Chicago. Stacey's extensive experience ranges across hundreds of appraisals and feasibility studies for full-service hotels in the Midwest, including convention headquarter hotels and portfolio assignments. Stacey earned her bachelor's degree from Cornell’s School of Hotel Administration and gained front-line hotel experience at Ithaca's Statler Hotel. Contact Stacey at (419) 367-3879 or [email protected].

Cincinnati’s workforce is set to return to pre-recessionary proportions by 2014, making the city’s economic recovery among the fastest in the Midwest. Cincinnati’s hotel industry has realized slower growth, though demand and ADR are trending upward. %%ViewCount%% Views 1 Comments
Share:
Subscribe To Newsletter