This past year, Cleveland has gained a major casino, a world-class aquarium, and a state-of-the-art convention center. How does this impact the lodging market?

In just the past year, Cleveland has gained a major casino, a world-class aquarium, and a state-of-the-art convention center. What does the city’s lodging market stand to gain in terms of performance and new supply?

Cleveland’s population has suffered declines over the past decade, but industry abounds along the city’s Waterfront district and technology corridors. Leisure attractions that opened in 2012, including Ohio’s first casino and the Greater Cleveland Aquarium, are expected to draw hundreds of thousands of visitors. Cleveland’s healthcare and technology sectors also account for millions of dollars in economic impact and a sizable amount of the city’s hotel demand. The following article details major developments that are reshaping Cleveland’s lodging market and fulfilling the city’s motto of “Progress and Prosperity.”

Development Update
Greater Cleveland’s revitalization over the past several years is most notable in its ascension as a global force in healthcare and technology. Recent developments include the following:

New tourism and leisure projects are bringing new life to the hospitality industry, with nearly $12 billion in capital investments made in Greater Cleveland over the past three years. Major projects include the following: 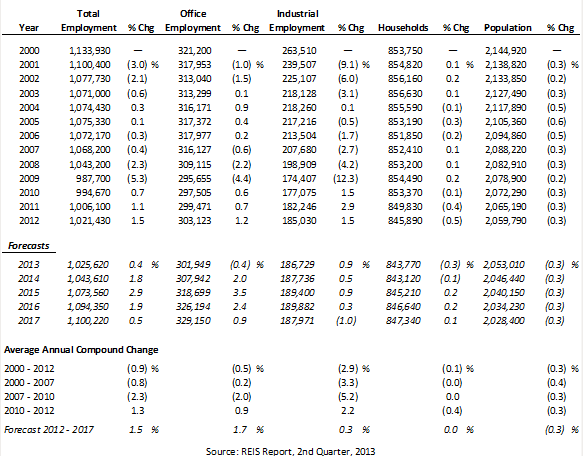 The following table lists the top ten employers in Cleveland in 2013. 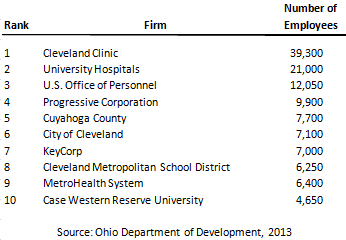 Eight Fortune 500 companies are headquartered in Greater Cleveland, including Eaton Corporation, Progressive, Parker Hannifin, Sherwin-Williams, TravelCenters of America, Aleris, and KeyCorp. Though diminished from its heyday, the manufacturing industry still accounts for 12% of the workforce in the Cleveland-Elyria-Mentor Metropolitan Statistical Area. Current manufacturing output has returned to levels comparable to 1990, fueled by a disciplined transition from traditional to more advanced production and management techniques. Hence, even with fewer employed in manufacturing, the sector remains a cornerstone of Cleveland’s economy.

In contrast, the number of jobs in Metro Cleveland’s healthcare sector continues to grow. The Cleveland Clinic, the area’s top employer, is widely regarded as the best cardiology and heart surgery center in the U.S. Part of the HTC, the clinic’s neighbors include the University Hospitals Case Medical Center, the MetroHealth System, and Case Western Reserve University, which collectively employ more than 71,000. The rapid growth of institutions in and around University Circle continues to inspire growth in other districts within the Health-Tech Corridor.

The following figures illustrate unemployment trends in Cleveland over the past ten years. 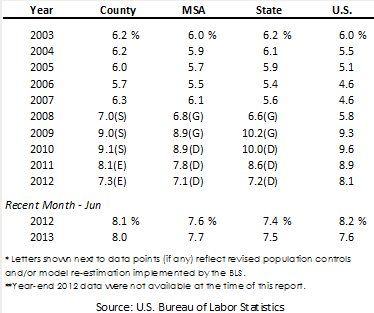 Unemployment rates in Cuyahoga County have fallen considerably since 2010, mirroring state and national trends. Despite job losses in manufacturing, the region has realized significant growth in other economic sectors such as healthcare, technology, and tourism. This growth has been offset somewhat by declines in the government, hospitality, and business and professional services sectors over the past year, largely due to government sequestration; however, with continued expansion and capital investment in the healthcare, biomedical, and technology sectors, the overall employment outlook for Cleveland is optimistic.

Outlook on Market Occupancy and Average Rate
Hotel occupancy levels in the Cleveland market have rebounded since the recession. Occupancy should continue to strengthen gradually, exceeding its pre-recession peak in the next two years with the aid of demand generated by the city’s strong healthcare, biomedical, technology, and tourism industries. Average rate stumbled in 2009 and 2010, but bounced back in 2011; the push for higher average rates should bring stronger RevPAR growth over the next several years.

Hotel Construction Update
In step with the advance of new and expanding demand generators, two major hotel projects have recently been completed in Cleveland, with several others in the pipeline, as summarized below:

Transactions ranged from the $1 million limited-service Motel 6 to the $36.5-million sale of the full-service, luxury Ritz-Carlton Cleveland hotel. These sales represent hotels built between 1963 and 1999; hence, major renovations are expected to take place over the next several years to modernize many of the properties.

Conclusion
The success of Cleveland’s transition from an economy hinged on manufacturing to a diverse collective comprising medicine, biotech, and tourism is evidenced in new points of interest in the city such as the Horseshoe Cleveland, the Greater Cleveland Aquarium, and the Global Center for Health Innovation. These venues, along with established attractions like the Rock and Roll Hall of Fame, promote a positive outlook for the local lodging market, which is expected to realize continued growth in league with greater demand.

Stacey Nadolny, MAI, an HVS Managing Director, leads the firm’s consulting and valuation practice in Chicago. Chicago is one of over 30 cities across North America where HVS has experts living and working, providing insights and solutions to clients. In the Midwest, HVS leaders are located in St. Louis, Detroit, Minneapolis, Nashville, Cincinnati, and Omaha, in addition to Chicago. Stacey's extensive experience ranges across hundreds of appraisals and feasibility studies for full-service hotels in the Midwest, including convention headquarter hotels and portfolio assignments. Stacey earned her bachelor's degree from Cornell’s School of Hotel Administration and gained front-line hotel experience at Ithaca's Statler Hotel. Contact Stacey at (419) 367-3879 or [email protected].

This past year, Cleveland has gained a major casino, a world-class aquarium, and a state-of-the-art convention center. How does this impact the lodging market? %%ViewCount%% Views Comments
Share:
Subscribe To Newsletter