Colorado Springs’ hotel industry has been in business for more than a century, with a wide spectrum of entities driving demand. The market wasn’t hard hit by the recent recession, and major events this summer should bode well for local hotels. 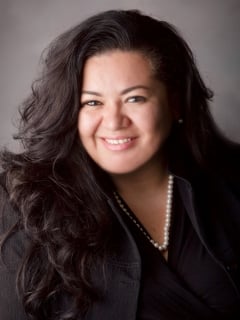 19th century mining operations, most famously the Pikes Peak Gold Rush, put Colorado Springs and surrounding cities on the map and provided the impetus for an array of early lodging facilities to serve the needs of westward-bound adventurers. The succeeding decades brought an influx of “health tourism,” with the sickly seeking to recuperate in the Springs’ mild, rejuvenating climate and at the world-famous Broadmoor hotel. Some of the nation’s central military operations were established in the area following World War II, and today a phalanx of businesses, government operations, tourism attractions, and natural wonders bolster the city’s diverse economy.

The following article looks at how these entities and upcoming events are affecting the Colorado Springs lodging market.

The Colorado Springs market offers some 80 hotels and more than 8,600 rooms, which are divided among four major submarkets, as illustrated here: 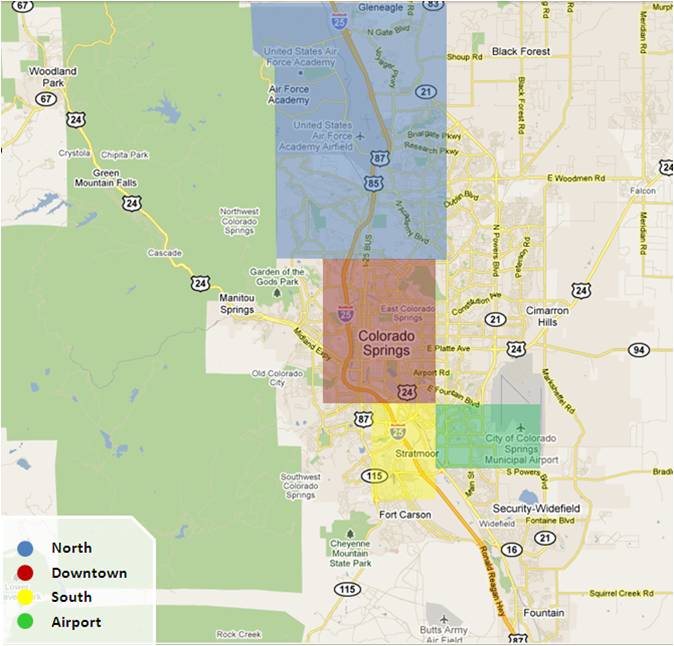 Limited-service hotels dominate the North and Airport submarkets, while most of the city’s full-service properties are located within the Downtown and South submarkets.

Over the course of 2007, 2008, and 2009, seven hotels totaling 553 rooms opened in Colorado Springs; most of these were limited- or select-service properties in the South submarket. The lack of any new supply in 2010 and the lack of new competitive full-service supply over the past few years helped lead to a better-than-expected recovery for existing properties in 2010. The following table shows the number of rooms entering the Colorado Springs market each year since 2000. 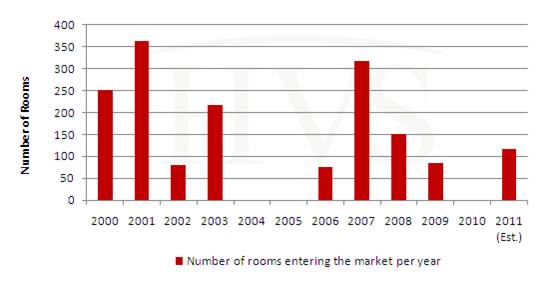 In 2009, three downtown buildings were purchased for conversion into The Mining Exchange, a Wyndham Grand Hotel. This full-service, luxury hotel, located in the heart of the Downtown submarket, will bring 117 new luxury guestrooms to Colorado Springs’ inventory when it opens in late summer of 2011.

In December of 2010, Nor’wood Development Group 1 reported that at least two parties have expressed interest in purchasing and completing the 300-room Renaissance Hotel, located in the North submarket near the Air Force Academy. Plans for the eleven-story hotel, which is about 70% complete, include 50,000 square feet of meeting space. Marriott’s website lists a tentative opening date sometime in January of 2015.

Area hotels were burdened by reduced demand during the recession, a situation exacerbated by the introduction of new supply in 2008 and 2009. Occupancy regained momentum in 2010 as a result of strong demand growth from the commercial, leisure, and government sectors; the most recent available data from 2011 suggest that this recovery is continuing. 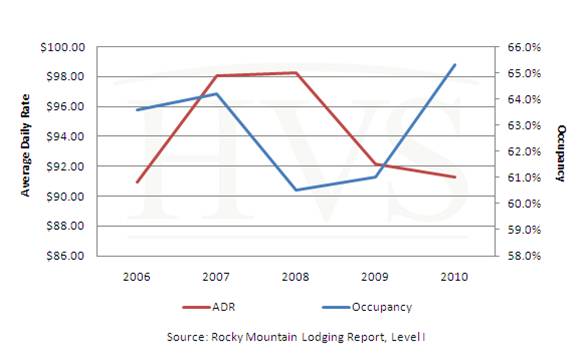 Average rates rose in 2007 with the entrance of new high-quality hotels and renovations to existing hotels. Rates have fallen sharply since late 2008, a result of the price-consciousness induced by the recent recession. Given the importance of government and military demand for the Colorado Springs hotel market, shifts in government per-diem levels have had a pronounced effect on average rate; the federal per-diem rate declined by $4 for fiscal year 2010/11, which produced a negative impact on overall average rate. As the national economy continues to recover and hotel operators rely less on rate discounts to entice travelers, average rate for area hotels should see a slow ascent, with pricing power regaining hold during the summer tourism season.

The government segment has seen significant growth over the past few years. The Department of Defense moved its space operations program to Peterson Air Force Base in July of 2009, and the Department of Homeland Security has relocated a number of operations to Colorado Springs. The following map illustrates how the major military centers are spread around the city. 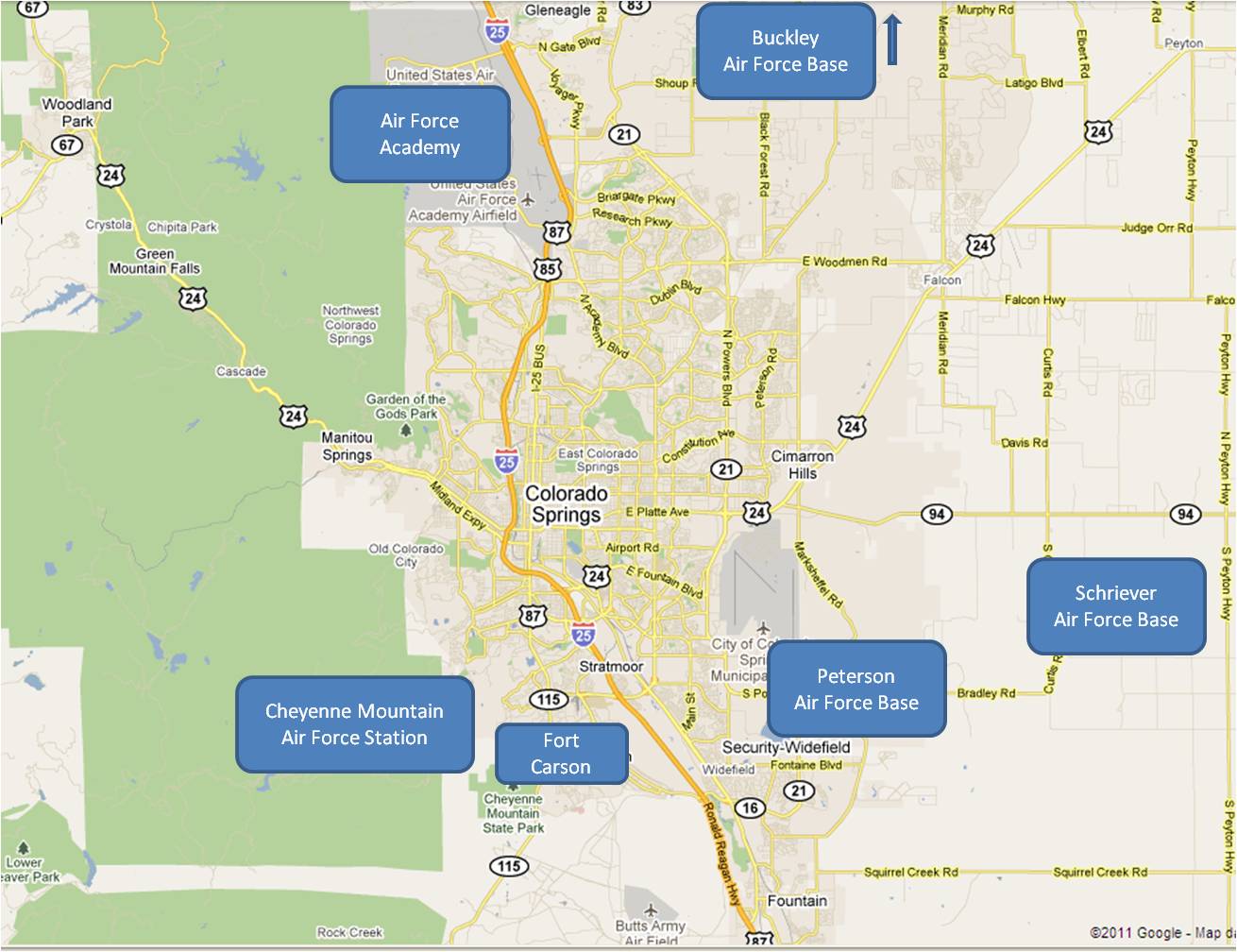 Military contractors and companies within the telecommunications, aerospace, and high-tech industries form the backbone of Colorado Springs’ commercial demand, which saw an increase in 2010. Booz Allen Hamilton, Hewlett-Packard, Agilent, Atmel, El Paso Corporation, IBM, Northrop Grumman, and Lockheed Martin have operations in and around the city. Hotels in the area also benefit from demand from the University of Colorado at Colorado Springs (UCCS).

The City has approved a proposal to create the $1-billion Vineyards Commerce Park, which will house five to ten data centers and a small waste-burning power plant. The project is now awaiting approval to be part of the Urban Renewal Plan for Colorado Springs, which would benefit the project through certain incentives and tax breaks. The new business park, in addition to retail development at University Village near the UCCS, should stimulate commercial demand growth in the coming years.

Cultural and historic attractions abound in Colorado Springs, complemented by remarkable natural monuments such as Pikes Peak, the Garden of the Gods, Seven Falls, and the Cave of the Winds. The U.S. Olympic Training Center hosts world-class athletes and their coaches, trainers, and other visitors throughout the year. The Broadmoor hotel and resort, known for nearly a century as the “Grand Dame of the Rockies,” continues to draw large numbers of tourists and vacationers to the area. Leisure demand in the market grew significantly in 2010. Strong growth is anticipated in the near term as a result of major upcoming events such as the U.S. Women's Open golf tournament in July and the USA Pro Cycling Challenge bike race in August of this year.

The headquarters of businesses and religious organizations supply a healthy amount of meeting and group demand to the market. The U.S. Olympic Training Center also attracts a wide variety of sports tournaments, and teams competing in USAA Hockey tournaments at the Colorado Springs World Arena also generate significant demand in this segment. In the absence of a large-scale, independent convention facility, the lion’s share of the market’s meeting and group demand goes to full-service hotels, some of which offer more than 40,000 square feet of meeting and exhibit space to accommodate group functions. Meeting and group demand in the market has seen slow growth since the recession, though the aforementioned golf tournament and bike race should boost demand in this segment in 2011, with many teams and their support squads having already booked contracted rates at local hotels.

As the Colorado Springs lodging sector continues to pull free of the recent recession, programs such as “Tank Full of Summer Savings,” which offers discounts to travelers to offset rising gas prices, and exclusive summer events look to keep the demand flowing in. Officials estimate that the U.S. Women’s Open will generate nearly 25,000 hotel nights and will have a $25-million economic impact on Colorado Springs this summer.2 The USA Pro Cycling Challenge will invigorate the local economy and lodging sector even further. Moreover, these and other major events hosted in Colorado Springs help embolden the city’s prestige as a rugged yet refined locale for groups, families, business travelers, and vacationers from around the world. Set among the rough-and-ready Rocky Mountains yet offering some of the finest resort accommodations in the West, Colorado Springs’ hoteliers are working full-steam-ahead to keep the local lodging market strong.

1 Nor’wood Development group is the developer of the 138-acre InterQuest Marketplace, a retail and entertainment center in which the Renaissance hotel site is located.

Lizzette Casarin is a Project Manager with the HVS offices in Denver and Minneapolis. Lizzette earned her bachelor's degree in Business Administration from the Universidad Veracruzana in Mexico. As a Project Manager, Lizzette oversees and executes site inspections, analyses, and report preparation for our valued clients. Working with the Mexican government’s FOBAPROA and IPAB programs, Lizzette assisted with the logistics for the sale and reorganization of several large hotel portfolios in Mexico. She also has experience in restaurant management. Contact Lizzette at 720-310-5118 or [email protected]

Colorado Springs’ hotel industry has been in business for more than a century, with a wide spectrum of entities driving demand. The market wasn’t hard hit by the recent recession, and major events this summer should bode well for local hotels. %%ViewCount%% Views Comments
Share:
Subscribe To Newsletter