A firmly entrenched, expansive, and consistently viable oil and gas sector has earned Houston the moniker “Energy Capital of the World.” Houston is home to 24 companies on the 2012 FORTUNE 500 list, and the vast majority are energy conglomerates (see list below).1  Major corporations such as Chevron, ExxonMobil, and Shell, as well as oil service companies such as Schlumberger and Fluor, also have a presence in the area—in some cases, a larger presence than at their “home” locations. With oil near $90 per barrel for the majority of 2012, these companies were able to continue high levels of hiring, training, and oil exploration. Increased activity near the Eagle Ford Shale in southwest Texas is also benefiting oil and gas entities located in Houston. In addition to the energy industry, healthcare and shipping play a role in driving strong demand to area hotels. 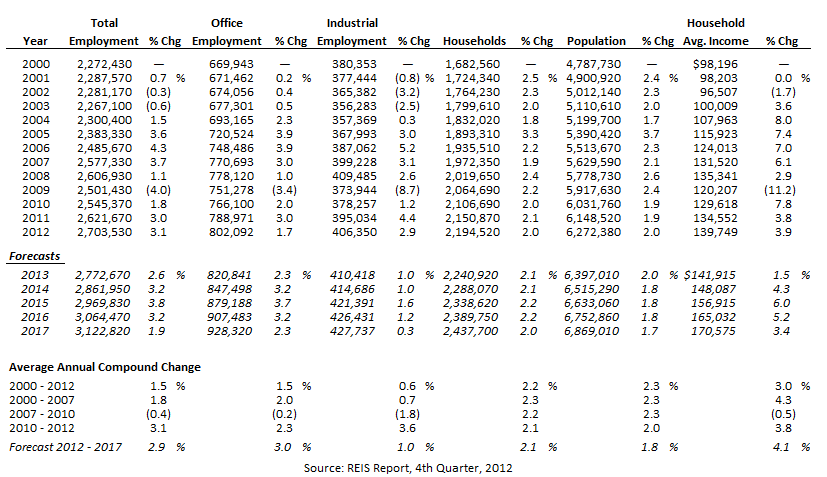 Houston’s workforce grew by 81,860 between 2011 and 2012, a 3.1% increase from the prior year and the third consecutive year of growth following the economic recession of 2009. This workforce growth placed the city among the fastest-growing metropolitan areas in the nation, with a population growth of 2.0%, twice the national average. The Greater Houston Partnership reported that Houston was the first metro area in the nation to surpass its pre-recession employment levels in the fall of 2011.

The following table illustrates unemployment statistics for Harris County, the Houston MSA, the state of Texas, and the U.S. from 2002 to 2011. 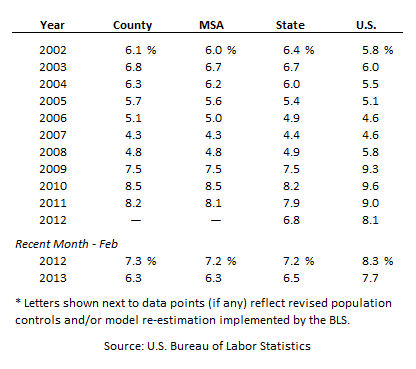 As of February 2013, the unemployment rate for the Houston metropolitan area stood at 6.3%, compared with 7.7% for the nation. Approximately 69,000 new jobs are forecast for 2013, with much stronger growth expected in 2014 and 2015. The following bullet points summarize major forces of economic growth in Houston:

• In addition to the myriad of energy firms previously discussed, ExxonMobil, the largest publicly traded integrated oil and gas company in the world, has oil exploration, extraction, shipping, and wholesale operations located throughout the Houston area. In 2011, ExxonMobil began construction on a multi-building campus in Spring, Texas, just north of Houston. The campus will consolidate employees from the company's Houston and Fairfax, Virginia offices; an estimated 8,000 employees are expected to be based in the new campus when construction is completed in 2014.

• With more than 120 hospitals within the metropolitan area, Houston is a world leader in medicine and boasts the world's largest medical complex, the Texas Medical Center, where approximately seven million patients are treated each year. The Texas Medical Center features 45.5 million gross square feet of patient care, education, and research space distributed across 280 buildings. Planned projects include new hospitals, clinics, research space, and other office space by Texas Medical Center institutions along with city, county, state, and federal investment for infrastructure. Ultimately, the Texas Medical Center is projected to total 59 million gross square feet of medical space. Several of the largest medical institutions have begun to expand westward, such as Texas Children's Hospital and Methodist Hospital. Furthermore, the University of Texas M.D. Anderson Cancer Center has purchased approximately 35 acres along the Energy Corridor of West Houston and plans to build a medical facility in 2017.

• According to the Greater Houston Partnership, 66 of the world's 100-largest non-U.S.-based corporations have operations in Houston. The Port of Houston is the busiest port in the U.S. in terms of foreign tonnage, second busiest in the U.S. in terms of overall tonnage, and thirteenth busiest in the world in terms of overall tonnage. In 2013, for the second consecutive year, Site Selection magazine named Houston the number one location in the country for corporate expansions and relocations, with the area recording 325 new or expanded facilities in 2012. The Galleria is the largest mall in Texas and is the seventh largest in the U.S.; with more than 24 million visitors annually, the Galleria is consistently named the most visited establishment in Greater Houston. Following the 2010 merger of Houston-based Continental Airlines and Chicago-based United Airlines, the George Bush Intercontinental Airport has remained the largest U.S. hub for the merged airline. 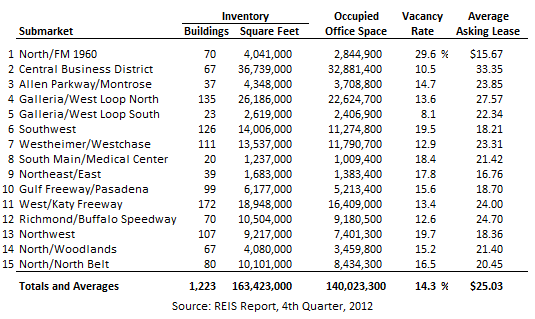 Houston’s office market is expanding to accommodate the surge in jobs. As of the fourth quarter 2012, the Houston office market offered 163 million square feet of commercial space. Office vacancy rates in the city have realized year-over-year improvements since 2010 and now stand at approximately 14%.
The following table illustrates a trend of office space statistics for the overall Houston market. 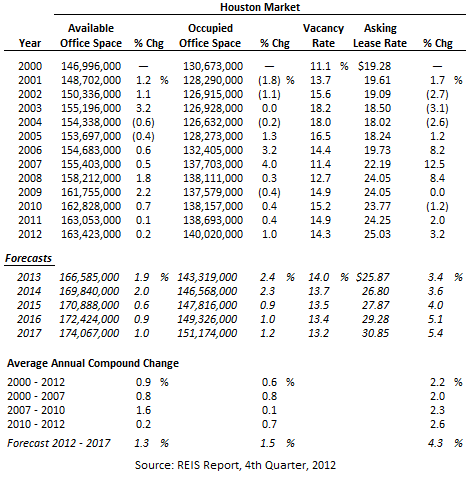 Over three million additional square feet of office space are under construction throughout the city, primarily in the Galleria and West Houston submarkets. Absorption levels are expected to keep pace with those of 2012, resulting in even lower vacancy rates and higher asking lease rates in the near term. With a vacancy rate of 10.5% and an average asking lease rate of $33, Houston’s Central Business District submarket is the strongest in the city. As such, a variety of office buildings have been proposed for this area that could potentially add over 2.5 million square feet of office space to Downtown, an increase in supply of approximately 7%.

With approximately 900 hotels and 84,000 hotel rooms, Houston is the tenth-largest hotel market in the nation. In the last ten years, the Houston hotel market has realized a compounded annual rate of growth in supply of approximately 2%. The increase in supply peaked in 2009 and 2010, during which the market grew at an average rate of 6%; many of the projects that opened during the recent recession were planned and set into motion during the upswing of 2006 through 2008. The stringent requirements for financing that have been in place since the recession have kept supply increases closer to the 1% mark over the past two years. According to HVS research, approximately ten new hotels, comprising 900 guestrooms, are currently under construction in the city, continuing the trend of a 1% year-over-year increase in supply. Many more hotels are in the planning stages for Houston, potentially bringing about as much as a 2% annual increase in supply if all properties are brought to fruition over the next few years.

Of the upcoming new supply, the largest and most notable project remains the 1,000-room Marriott Marquis in Downtown Houston, which is being developed by Houston-based RIDA Development Corporation. The property is projected to break ground in 2014 and open in 2016, becoming the city’s new convention headquarters hotel. A rendering of the proposed Marriott Marquis is pictured below. 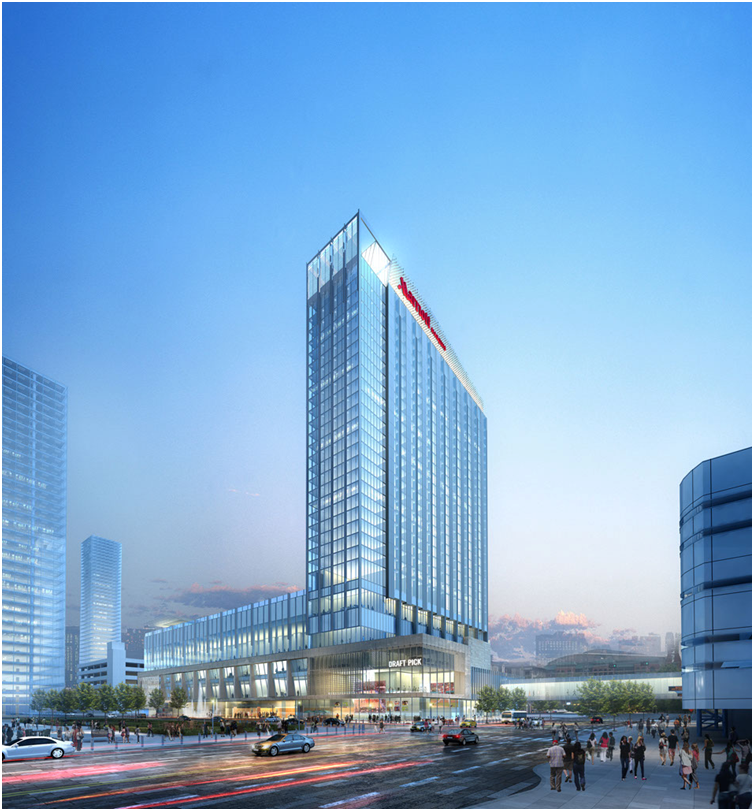 As of March 2013, Houston’s lodging market was operating at the highest occupancy and rate in the city’s history. Houston has traditionally been a market that seldom breaks the 65%-occupancy mark, a threshold that is typically crossed by markets that attract a healthy mix of business and leisure travelers. Houston, although extremely strong in the commercial segment, often exhibits weak weekends with the exception of certain submarkets such as the Galleria, which supplement strong weekday occupancy with either leisure or group travelers during the weekends. Given the lack of significant supply increases in the near future, the Houston hotel market should continue to benefit from higher occupancies in the near term. Places to watch in and around Houston in 2013 include the following:

Downtown: A lack of new supply in 2013 is expected to push average rates higher at hotels in Houston’s Downtown. Over the long term, Downtown office developments should continue to attract new businesses and tenants if historical absorption levels keep pace, providing hotels with additional demand.

Energy Corridor: Similar to the Downtown and Galleria districts, a boom in the energy industry has resulted in a need for more office space in Houston’s Energy Corridor, and hotels continue to benefit from the increased demand.

Woodlands/Spring: This relatively small hotel submarket is poised to grow once ExxonMobil’s campus is completed in 2014 and the area becomes home to 8,000 new employees; furthermore, other energy service companies are likely to follow ExxonMobil’s relocation to the area. On the other hand, the Greenspoint District, located twelve miles south of the new ExxonMobil campus, could be significantly impacted by this relocation if the space left vacant by ExxonMobil is not re-leased rapidly.

Galveston: Located one hour south of Houston, Galveston significantly benefits from the growth and proximity of the Houston metropolitan area. Hotels in this Gulf Coast city sell out nearly every weekend of the year and every day during the summer. Galveston also features some of the highest average rates in the metropolitan area.

Analysis of Transactions and Brokers’ Outlook

Cap rates, the most prominent indicator of hotel values, remain strong for the Houston area. HVS interviews with hotel brokers active in Houston, in addition to HVS data on recent hotel transactions, revealed that full-service hotels and high-quality assets are selling at cap rates of 7.5 to 8.5, while limited-service hotels or lower-quality properties may sell at cap rates of 8.5 to 9.5. Factors such as condition, age, location, branding, and the dynamics of supply and demand for a specific submarket also influence these parameters.

The recessionary years of 2009 and 2010 negatively affected Houston’s economy and lodging market, but both have since rebounded. A steady recovery became evident in late 2010, and hotels came through 2011 relatively healthy. The growth that occurred in 2012 and thus far in 2013 has continued to surprise market participants. With both occupancies and average rates at the highest level in Houston’s history, the near-term outlook remains promising. There is an increased potential for new supply in well-performing markets, and although significant increases in supply are not anticipated in the near future, this could change as the market continues to trend upward; therefore, thorough analysis and research of each specific submarket must be completed prior to undertaking an investment. HVS forecasts the lodging market in Houston to realize minimal occupancy increases in 2013, while average rates are expected to grow by 6% to 7%; as such, existing hotels and new projects that have been able to obtain financing are well positioned to benefit from the city’s economic recovery in 2013.

Luigi Major, MAI, is the Managing Director of HVS Los Angeles. He is seeking new consultants to join the firm's Southern California operations base in the West Hollywood area of Los Angeles; if you are interested in joining HVS LA, please visit www.joinhvs.com. Luigi earned his bachelor's degree from the University of Houston's Conrad N. Hilton College of Hotel and Restaurant Management. Luigi focuses on consulting, valuation, and advisory for hotels. Contact Luigi at (310) 270-3240, or [email protected].