Transactions, performance, and demand are up for Nashville’s lodging industry, and new supply is set to come online over the next year. Are the city’s hotel demand generators prepared to keep up the pace?

The economy of Tennessee’s capital city has proven indomitable over the past several years, even given the upsets in the markets and the gridlock in the federal government. The stability of state government and educational institutions, growing healthcare and automotive companies, and robust music and tourism industries continue to create billions in economic impact and maintain vibrant levels of hotel demand. The state-of-the-art Music City Center, which opened in May of 2013, has more than two dozen events booked for October alone, which will bring in an estimated 33,100 delegates. This forward momentum should translate into improving performance levels for Nashville’s hotel industry, which has recovered remarkably since the recession. These factors keep Nashville among the most sought-after markets for hotel acquisitions, as well as one of the most active in terms of new development. 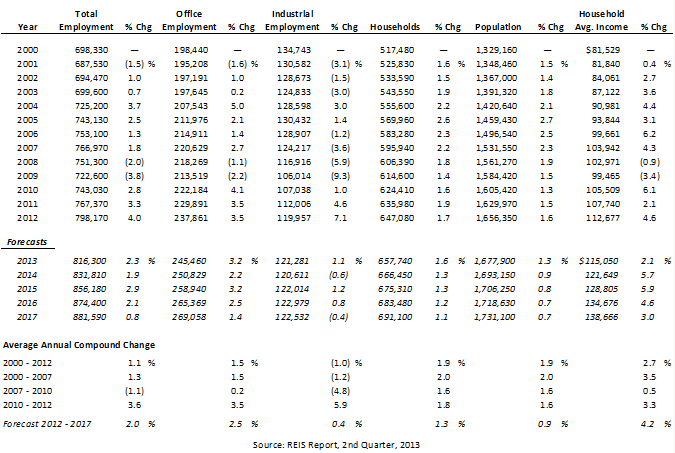 As part of a pro-growth and pro-business agenda, Mayor Karl Dean and the members of the Metropolitan Council have actively used city tax incentives to attract or keep companies in Nashville. This has kept Nashville’s population growing and earned the city a place on many top economic growth lists, including #2 on Forbes’ list of “The Best Big Cities for Jobs 2013.”

The following table illustrates unemployment statistics for the City of Nashville, the Nashville MSA, the state of Tennessee, and the U.S. 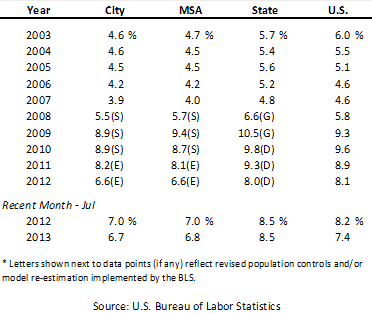 While unemployment remains above pre-recession levels, Nashville’s total workforce has grown steadily over the past three years. Nashville is the second-biggest center of music production in the U.S., and Nashville’s music and entertainment industry reportedly produces a $10-billion annual economic impact on the region. Nearly every major music label and many independent labels have a presence in Nashville, which is also home to Gibson Guitar Corporation, one of the world’s most venerable manufacturers of guitars and other musical instruments. Rounding out the mix, festivals such as the CMA Music Festival and Bonnaroo attract thousands of visitors to the area each year.

The medical industry in Nashville employs more than 200,000, contributes more than $30 billion to the local economy each year, and comprises more than 250 companies, including HealthSpring, Hospital Corporation of America (HCA), and Vanderbilt School of Medicine. HealthSpring is currently consolidating its Nashville operations with the construction of a headquarters campus; the $54-million facility will reportedly increase HealthSpring’s workforce by more than 1,300 employees by the end of 2013. Furthermore, the planned West End Summit development will house new offices for HCA and the Sarah Cannon Research Institute and bring an estimated 1,000 new jobs.

The 2013 annual state Automotive Manufacturing Strength rankings, as published by Business Facilities, underscore the importance of the automotive industry in Nashville—the state of Tennessee ranked first in the nation for the fourth consecutive year. Nissan North America completed a four-year relocation process in 2010, opening its corporate headquarters in the Nashville suburb of Franklin. Nissan, which operates its largest North American manufacturing plant in nearby Smyrna, announced in June of 2013 that it would add more than 900 manufacturing jobs for future production of the Nissan Rogue. Moreover, in 2013, Nissan began production of lithium-ion batteries for its LEAF electric car at a new $1-billion battery plant in Smyrna. Nashville is also home to Bridgestone America's Tire Operations, the North American business unit of Bridgestone Corporation, the world's largest tire and rubber company.
Recently announced business expansions and relocations are building on Nashville’s solid economic cornerstones. In July of 2013, Aramark announced plans for a new $20-million facility in Nashville that will create approximately 1,000 new jobs by 2017, and UBS plans to bring 1,000 jobs to a new downtown office location over the next five years.

The overall office vacancy rate in Nashville is relatively low, and vacancy is well below 10% in Brentwood/Franklin and West End/Belle Meade; these submarkets enjoy accessible locations within the greater Nashville metropolitan area and boast established business communities, which allow them to command the highest average asking lease rates in the area. The Brentwood/Franklin submarket received a boost in early 2013 when RANDA Solutions, Inc. moved into 26,000 square feet of office space in the submarket. Additionally, the West End/Belle Meade submarket was bolstered by The Advisory Board Company’s relocation into 19,000 square feet of office space. These two submarkets should enjoy continued growth, especially Brentwood/Franklin, which is expected to experience over 450,000 square feet of office space growth in 2014 as new headquarters for Tractor Supply Company and LifePoint Hospitals are completed.

The following table illustrates a trend of office space statistics for the overall Nashville market. 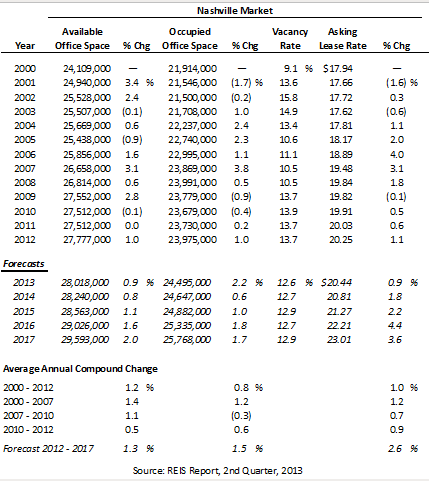 The amount of available office space in Nashville has realized negligible growth over the past three years. Vacancy rates rose slightly in 2009 and 2010, but remain relatively low and below the prior peak in 2002; lease rates are likewise holding strong. Forecasts for Nashville’s office market reflect a resumption of construction and modest growth in available space, balanced by continuing demand increases.

Outlook on Hotel Market Occupancy and Average Rate
Nashville’s overall economic health has fortified the city’s lodging market. During the peak of the last market cycle (2006/07), strong performance across the market had brought many new hotel developments to the drawing board. Though financing for most froze up during the recession, hotel demand levels took only a minor hit in Nashville compared with other markets across the country. Occupancy levels at area hotels began to rise in 2010, and rates soon followed suit. Healthy demand continued in 2011, and overall demand levels reached new heights in 2012; average rate growth also continued through 2012.

The Nashville hotel market benefits from an extremely stable base of demand generated by its leisure, government, and commercial entities, providing strong occupancy in the mid-80s to high 90s on nearly every night of the week, especially Friday and Saturday, from February to October each year. The lack of recent hotel development and the continued expansion of the local demand base have increased the premium for existing hotels among both guests and investors. 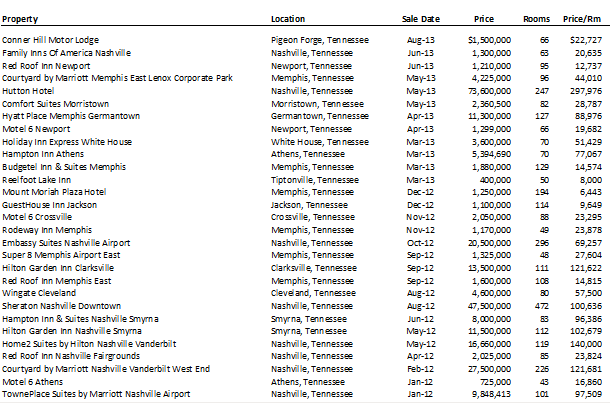 Twelve of the transactions listed above represent hotels in and around Nashville, and the contracted prices per room for these sales were well above those for nearly every other area in the state. The most significant sale in terms of total price and price per room was the Hutton Hotel. This 247-room, full-service property is located approximately one mile west of major attractions such as Bridgestone Arena and the Country Music Hall of Fame. 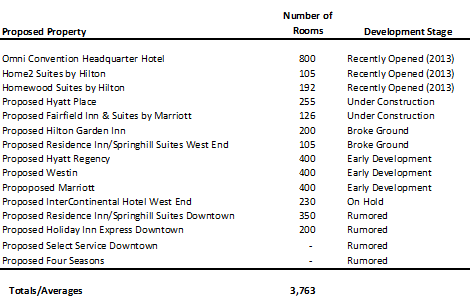 The four rumored hotel projects listed above, as well as the potential for others, do not come as a surprise given the Nashville market’s recent performance gains and a lack of new supply. The Music City Center convention complex, which opened in May of 2013 in Downtown Nashville, has been a further impetus for hotel development. Most of the proposed projects listed above are planned for the southern section of downtown, proximate to Music City Center and the 800-room Omni headquarters hotel; two of these hotels, the 400-room Hyatt Regency and the 400-room Marriott, are the most recent beneficiaries of the city’s attractive tax-incentive policy.

Even with the significant number of new hotel rooms in the pipeline, the impact of supply growth in Nashville is expected to be modest. Market participants note that even before the opening of the new convention center, the market had been routinely selling out on multiple nights per week throughout the year.

Conclusion
Now well beyond the recovery phase following the recent recession, Nashville’s economy and hotel market have entered into a period of expansion. The market offers attractive opportunities for investors seeking hotel acquisitions, as well as selective opportunities for repositioning existing hotels and breaking ground on new developments. Overall, the outlook for Nashville’s hotel industry is positive, with an expectation of steady growth over the near term.

Transactions, performance, and demand are up for Nashville’s lodging industry, and new supply is set to come online over the next year. Are the city’s hotel demand generators prepared to keep up the pace? %%ViewCount%% Views 7 Comments
Share:
Subscribe To Newsletter