The St. Louis hotel market is at an exciting turning point, with several new, lifestyle-oriented properties set to make their mark this year. These new hotels will make a statement for the local hotel scene as this Midwest city’s status as a regional tourism destination continues to grow.

The St. Louis Cardinals remain the market’s number one tourism attraction, and a $260-million expansion of the stadium-adjacent entertainment complex, Ballpark Village, is underway. The city’s other top attraction, the Gateway Arch, just completed a $380-million revamp in 2018. By late 2019, the $187-million transformation of the former Union-Station shopping mall into the St. Louis Aquarium is expected to be complete, adding a new major attraction to the market. These exciting developments are complemented by a host of other attractions in the City of St. Louis, including a casino, two arenas, and numerous museums and theaters. Looking forward, a group of private civic boosters is in hot pursuit of a Major League Soccer (MLS) franchise for the city, including plans for a new, $250-million soccer stadium. 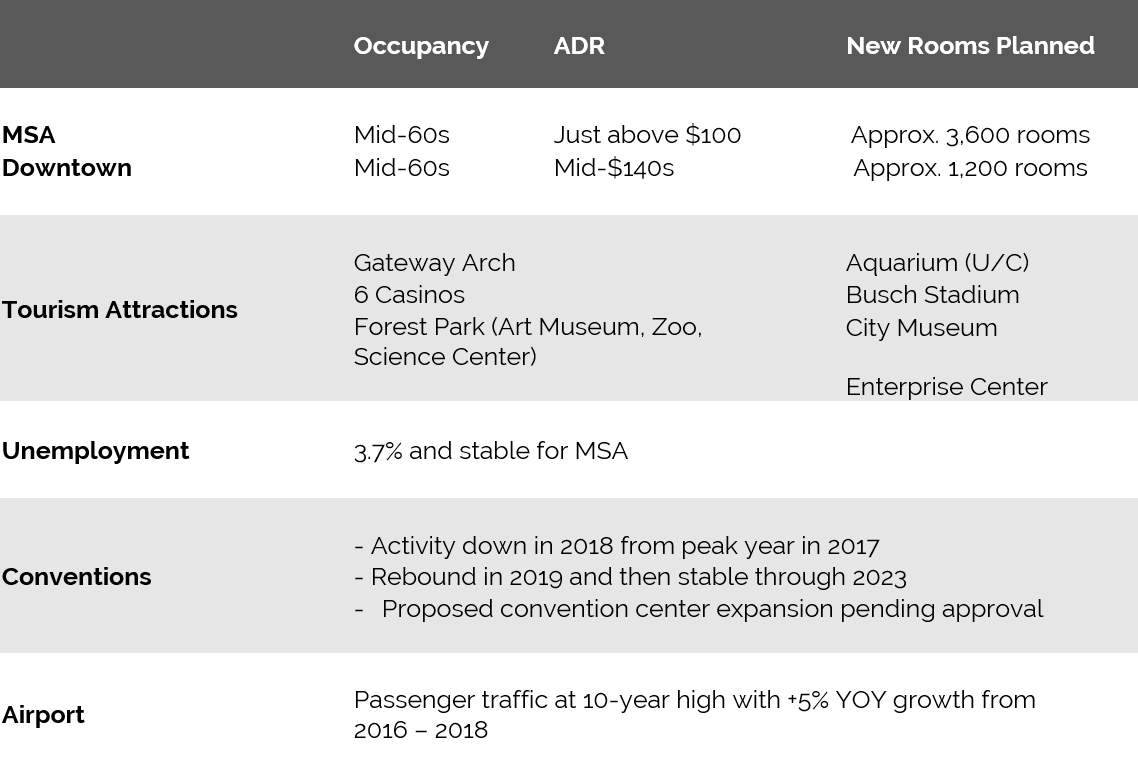 Several new, lifestyle-oriented hotels have recently opened or are under development, expecting to target St. Louis’s strong and growing leisure travel segment. Since opening in November 2018, the independent Angad Arts Hotel has been a positive lodging and dining addition to the Grand Center Arts District. Guests are immersed in the arts throughout the hotel, with thoughtful installations everywhere, from sculpture on the fire escape to media in the elevator. The hotel represents a $65-million redevelopment of the former Missouri Theater, which is on the National Register of Historic Places, by St. Louis-based development and design firm, The Lawrence Group. Downtown, Restoration St. Louis has invested $65 million to transform the Union Trust Building into The Hotel Saint Louis, Autograph Collection. The hotel, which opened in December 2018, preserved and restored much of famed architect Louis Sullivan’s original design, blending old-world style and sophistication with a modern amenities and conveniences. Spring of 2019 will welcome the third in a trio of upscale boutiques with the anticipated opening of the Last Hotel in the former International Shoe factory, a $54-million redevelopment by Fe Equus. Located in the Downtown Loft District surrounded by former textile factories, the design of the property will be focused on fashion. Like the other two properties already mentioned, the Last Hotel will also feature an emphasis on food and beverage with a ground-floor restaurant and lounge, as well as a rooftop venue.

These properties will represent the first new hotels added to the Downtown market since 2011 and should be able to capitalize on pent-up demand for guests seeking upscale, one-of-a-kind experiences. Although the Downtown market has historically been somewhat rate-sensitive, these hotels are expected to push the rate ceiling to new heights, in part by focusing on transient leisure travelers. Other exciting new hotel developments currently under construction include a Hotel Indigo and Hyatt Place, both located in re-purposed historic structures, as well as the ground-up construction of Live! By Lowes hotel as part of the Ballpark Village expansion.

Overall, the St. Louis market is benefitting from low and stable unemployment levels, as well as several major non-tourism developments not addressed in this article. Furthermore, a planned expansion and renovation of the convention center is pending approval from the county council; thus, although convention activity was down in 2018 from an all-time high in 2017, the outlook for 2019 and beyond is favorable.

HVS continues to regularly consult in St. Louis, with the local office led by Daniel McCoy, MAI. He is ready to assist you on any consulting need you may have. Drew Noecker with HVS Brokerage can also discuss any St. Louis area assets you may be considering selling in 2019.

Dan McCoy, MAI is the Managing Director and Senior Partner of the HVS St. Louis office. St. Louis is one of over 30 cities across North America where HVS has experts living and working, providing insights and solutions to clients. In the Midwest, HVS leaders are located in Chicago, Detroit, Minneapolis, Nashville, Cincinnati, and Omaha, in addition to St. Louis. Dan, a native of St. Louis, earned his bachelor's degree from Truman State University in Missouri and has front-line hotel experience with Hilton and Denali Park Resorts. Dan is a Designated Member of the Appraisal Institute (MAI) and a certified general appraiser in Missouri and surrounding states. Contact Dan at (970) 215-0620 or [email protected].

The St. Louis hotel market is at an exciting turning point, with several new, lifestyle-oriented properties set to make their mark this year. These new hotels will make a statement for the local hotel scene as this Midwest city’s status as a regional tourism destination continues to grow. %%ViewCount%% Views Comments
Share:
Subscribe To Newsletter